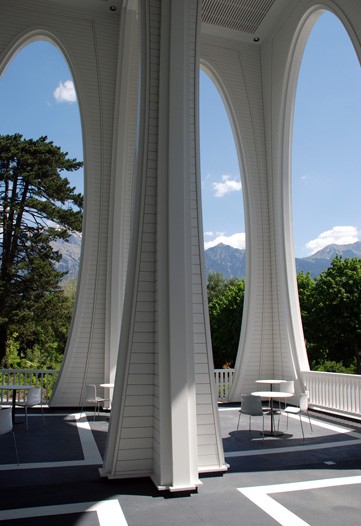 A train snakes its way through the Swiss countryside on the outskirts of Zurich, near lakes and valleys set against verdant mountains, en route to the thermal resort of Bad Ragaz.

This small, quiet village, famous for its tradition of thermal baths, exudes a surreal ambiance, partly because of the statues — some in startlingly realistic human form — along its sidewalks.

More traditional than architect Peter Zumthor’s well-known quartzite and concrete thermal baths in nearby Vals, the Tamina Thermal Baths, designed by Zurich-based architects Smolenicky & Partner and completed in June 2009, are an intriguing mix of grand hotel culture with a dash of science fiction. Their monumental architecture, with arches and big oval framed windows, evokes the elven castle in “Lord of the Rings.”

The sensation of these crispy white spaces, sustained by a forest of pillars, against the vegetation surrounding blue-lit baths, makes visitors feel like they’re in a fantasy digital world.

Guests emerge for regeneration in pools of different temperatures, one extending to the exterior swimming pool with turning currents and a cascade falling from a pyramidal rock planted in its center, reinforcing the feeling of disciplined nature.

Positioned somewhere between kitsch and conventional, the architects’ effort amounts to a big white stone thrown against the concrete world of contemporary architecture.