The London-based tailor chats with WWD about his many projects including an expanding Superdry collection and recent big screen collaborations. 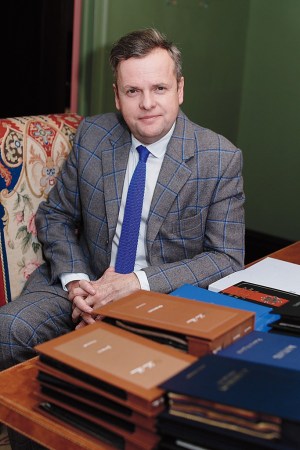 Timothy Everest is on a mission to redefine the meaning of tailoring.

The London-based bespoke tailor, who is in New York this week visiting with and fitting clients, has succeeded in translating his skills into a variety of iterations.

“The demands of men’s wardrobes are different today. For many, the formal three-piece suit is no longer relevant, but men still want to look their best. They also have a sophisticated understanding of tailoring and craftsmanship — and fashion — but want something more accessible and applicable to their day-to-day lifestyles,” he explained.

This comes despite the fact that “bespoke is really strong,” he said, particularly in the U.S., Middle East and Asia. “It’s taken a long time for people to get into it, but now they’ve embraced it.”

For those who can’t afford Everest’s bespoke suit prices — they average around $5,600 — the designer created a Bespoke Casual collection, a line that takes its inspirations “from the East End streets” that surround the company’s offices in Spitalfields and includes classic pieces such as a towncoat or peacoat with updated linings and trims.

“We made a few interesting pieces,” he said, using traditional fabrics such as tweeds as well as jeans and woven shirts. The success of this test led Everest to create a ready-to-wear collection that he will offer for spring. “It’s about questioning the future of tailoring,” he said. “We like the idea of being touched by bespoke, but then we deconstruct it.”

The Bespoke Casual collection, whose name he expects to change, will retail for around $900 for a jacket, $300 for jeans and $220 for shirts. “We’re trying to appeal to the premium end of ready-to-wear,” he said.

Beyond that, Everest will expand his successful collection with Superdry that launched in 10 European stores in September. He created two suit styles and two tweed jackets and previewed them during London Collections: Men in June. Although he wasn’t sure the jeans-and-graphic-Ts Superdry customer would embrace his look, he said sales were strong despite the high price points. A towncoat, for example, was $400 and a sport coat was $300.

“We thought it might have been a bridge too far, but the sell-throughs have been great.”

A second men’s wear collection will be offered and the company will also add women’s wear. Those lines are expected to hit retail in February and will be sold at Superdry’s U.S. stores as well. “It’s a big push for us. It keeps the brain useful and fresh,” he said.

Everest is also continuing with his collaborations with Hancock, which will be shown at the Pitti Uomo show in Florence next month, as well as Brooks, Pearson, Rapha and others. For spring, he’s working with Future Laboratory on a 22-piece collection that blends the skill and heritage of tailoring with more casual pieces. It will include Albany collar cotton shirts, tailored jeans and unlined cropped wool jackets.

At the same time, Everest has been busy with several celebrity projects, including dressing Ralph Fiennes for the latest James Bond movie.

Everest said his work on “Skyfall” was “top secret,” so he didn’t get any press about wardrobing Fiennes, who will take over the role of M in future Bond projects. “I couldn’t talk about it,” he said, noting that Tom Ford did a great job — and got all the publicity — dressing lead actor Daniel Craig. But he was brought in to work with Fiennes. “It was a low budget for a Bond movie and they were looking for someone to dress Ralph,” he said. “He wasn’t sure what he wanted — he was trying to find himself. So we went with a little bit of Prince Charles for the final scene where he was standing there in a double-breasted suit and tie. He looked the part of M.”

Everest, who was also involved in the “Tinker Tailor Soldier Spy” and “Prometheus” films this year, expects he’ll continue to dress Fiennes for the next couple of Bond films.

Outside of the big screen, Everest has also been collaborating with the Rolling Stones during their current world tour. “We’ve worked with them for many years,” he said, “and have done quite a bit for the stage and press junkets.” He said that during the band’s recent concert in London, one of his assistants sat backstage from noon until midnight “in case they split something.” Luckily, the outfits stayed intact, but she was called into service to create microphone pockets because the musicians were chafing.

All in all, Everest said 2012 was an “extraordinary year for us Brits,” with the Olympics, the Queen’s Jubilee and now the Duchess of Cambridge’s pregnancy. And he’s hoping the momentum will continue into 2013.