Talking Tomes: The High Life and the Low

The current crop of photo, design and art books covers topics ranging from emeralds to cashmere scarves and film noir. 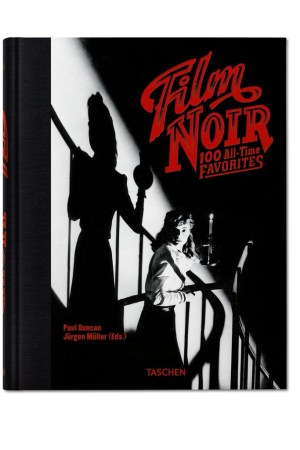 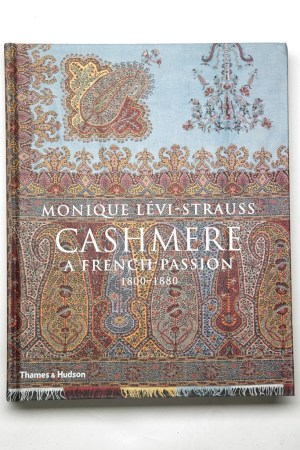 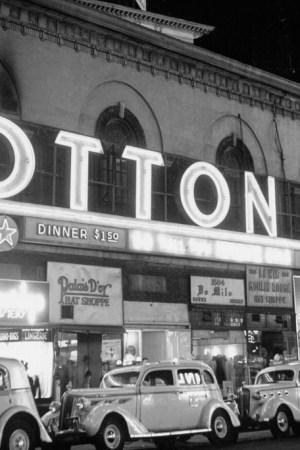 The Cotton Club in its heyday, from "In the Spirit of Harlem." 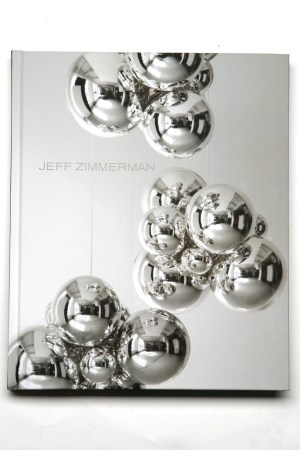 The cover of "Jeff Zimmerman."

The current crop of photo, design and art books covers everything from elegant emerald jewelry and vintage scenes from Miami’s Surf Club to chilling noir films and the underworld of Hieronymus Bosch.

“Emerald: Twenty-One Centuries of Jewelled Opulence and Power” (Thames & Hudson), by Joanna Hardy and Jonathan Self with a preface by Franca Sozzani and an introduction by Hettie Judah. Emeralds are 20 times rarer than diamonds, and their vivid green shades make them more exciting to look at, too, especially when massed. There’s Woolworth heiress Barbara Hutton wearing a tiara Cartier made from the chunky Romanov emeralds and Marlene Dietrich with her iconic face set off by Trabert & Hoeffer-Mauboussin’s diamond bracelets equipped with huge, barbaric-looking stones. Extraordinary pieces that belonged to Indian royalty are shown, among them the crown jewels created by Cartier for the Maharajah of Patiala, Bhupinder Singh, which included 586 emerald beads, four engraved emerald plaques and diamonds, all set in platinum.

This story first appeared in the March 10, 2014 issue of WWD. Subscribe Today.

Written history abounds here, too, as the authors describe such phenomena as the Cheapside Hoard — a rich trove of Elizabethan and Jacobean jewelry discovered in London in 1912 — and the role of the stones in a variety of kingdoms.

“Veruschka: From Vera to Veruschka/The Unseen Photographs by Johnny Moncada” (Rizzoli New York; available March 18), edited by Antonio Monfreda with text by Veruschka, Franca Sozzani, Valentina Moncada, Hamish Bowles, Antonio Monfreda and Massimo Di Forti. She was a young, German-born aristocrat known simply as Vera before she made the trip to the U.S. — pretending to be a mysterious Russian — that turned her into a star.

Johnny Moncada, a top fashion photographer in the early Sixties, took these pictures, which were left in a trunk for 40 years before he and his daughter Valentina rediscovered them. Taken in Rome, Capri and Sardinia, they show off a more coltish edition of the great model’s beauty than has been seen before, along with the innovative Italian fashion of the time with its imaginative sculptural details.

“Jacques Henri Lartigue: A Sporting Life” (Actes Sud/Hermès), preface by Anne-Marie Garat and text by Thierry Terret. Were sports enthusiasts more photogenic and charming in the early part of the 20th century than they have been since? A look at this book suggests that they were. But appearances can be deceiving. Lartigue, born in 1894, was from a wealthy, well-connected family, and when, at age seven, he received a camera as a gift, he had access to skilled athletes who could pose for him. But he made his living as a painter, and these early photos weren’t seen by anyone outside his inner circle until he had his first show of them at 69 (he lived to be 92).

Skater and professional beauty Liane de Lancy is shown promenading in Paris in 1911 wearing a tailored suit with a broad white collar, polka dot pussycat bow and feather-trimmed hat, while Lartigue shoots a horse race at Deauville from a plane in 1919, and the swimmers in his 1931 water-festival view of the Molitor swimming pool in Paris dangle from rings in front of lots of stylish spectators. All his sports images have an uncommon poetry to them — beautifully framed, yet focused on the action.

“The Surf Club” (Assouline), foreword by Pamela Fiori and text by Tom Austin, shows more pretty people at play. Here, they’re in a Miami institution, first conceived to provide a less formal, less crowded alternative to the local Bath Club. The Duke and Duchess of Windsor; Jerry Lewis and Dean Martin; Gary Cooper with his then-wife Veronica Balfe; Frank Sinatra honeymooning with Ava Gardner, and Elizabeth Taylor with an early fiancé, William D. Pawley Jr., are just a few of the celebrities shown, while there’s also a painting of the view from the club by Sir Winston Churchill, and snapshots of such scenes as the staff setting up for a car show.

Some pages show colorful, playful invitations for parties at the club, while menus and wine lists turn up in black and white. Now Richard Meier has been enlisted to bring the club into the current century.

Experts say that this dark movie category — with its black-and-white scenes wreathed in shadows —reflected the uncertainty of the post-World War II world, but its rigorously bleak point of view provided a disturbing-yet-engaging parallel — and negative — moral certainty of its own.

“Cashmere: A French Passion, 1800-1880” (Thames & Hudson), by Monique Lévi-Strauss; photographs of the shawls from the Etro collection and the author’s collection by Massimo Listri. Lévi-Strauss is the widow of the noted anthropologist Claude Lévi-Strauss and is an important collector of cashmere shawls, which were the sine qua non of luxury in Europe in the 19th century. Beginning with trips to Paris flea markets in the early Fifties, she bought the wraps and, over a period of 30 years, became an expert on them and their makers, particularly those who had won awards in trade expositions.

A wide variety of shawls are featured here, with lavishly intricate and colorful patterns, usually paisleys, in photos that show the whole textile or zero in on a single detail. Who knew that these pieces — which cost more, relatively speaking, than a mink coat in its heyday — came in so many variations?

“We Are Photogirls/DIY Fashion Shoot Book” (Laurence King), by Emily Stein and Celia Willis. This book is for teenagers who love fashion and want to know how to create a mood board, how to use a backdrop and how to take great pictures. It includes a time line for a shoot and instructions on how to make such things as giant pom-poms, do the porcelain Marie Antoinette Makeup Technique or have a My Hair Is Bigger Than Your Hair Competition. The last features tips on downward and upward backcombing. The writers helpfully point out that this playful little tome is good for boys, too.

“In the Spirit of Harlem” (Assouline), by Naomi Fertitta with a foreword by restaurateur Marcus Samuelson. This book is full of engaging photos of the stylish denizens of vintage Harlem, from shots of high-stepping dancers at the nightclub Elks Rendezvous to portraits of writers such as Langston Hughes and Jean Toomer. There is a picture of choir members at a christening; of a young Ethel Waters in the Thirties; of Miles Davis in 1955, and of Martha and the Vandellas in 1964. There are shots of the facades of brownstones and one of the legendary Apollo, when it celebrated its 50th anniversary in 1985.

“Jeff Zimmerman” (Damiani/D.A.P., available April 30), text by John Drury, interview by Sean Kelly. This is the first monograph devoted to the work of Zimmerman, an American glassmaker who was born in 1968 and who studied with architect Maya Lin and artists Kiki Smith and Ann Hamilton, as well as technicians Lino Tagliapietra and Pino Signoretto.

Inspired by the shapes of nature and using classical Venetian glassblowing techniques, he creates light fixtures, vases and sconces in interesting and imaginative organic forms. The book features work past and present, including shots of the pieces in place in shows, in the private homes of collectors and in corporate offices in England, Italy, Korea, the U.S. and elsewhere.

“Hieronymus Bosch: Complete Works” (Taschen), by Stefan Fischer. Bosch (1450-1516), whose real name was Jheronimus van Aken, although much imitated, was unlike any other painter of his time. He created a world of nightmares: fantastical, grotesque creatures acting out the Seven Deadly Sins — and every other possible transgression. Hell and its demons were vividly depicted.

This big, impressive book — intended to mark his 500th anniversary— showcases in vivid colors the drolleries he devised, which were traditionally shown only at the margins of medieval manuscripts; he brought them center stage, turning them into large panel paintings. Only about 20 works can be attributed to him for certain, and they’re all here. His most celebrated painting, “The Garden of Earthly Delights,” for instance, becomes a 43-inch foldout spread.

“Paradise Planned: The Garden Suburb and the Modern City” (The Monacelli Press), by Robert A.M. Stern, David Fishman and Jacob Tilove. Although the suburbs are most commonly associated with the Fifties, Stern, Fishman and Tilove trace them back in time, pointing out that Brooklyn Heights was New York City’s first suburb, and that the phenomenon of the garden suburb, which is the writers’ primary concern, grew from designs for tenants’ houses on English estates in the 18th century, when they first began to be systematically renovated to create a seamless, appealing whole.

This mammoth book (1,072 pages) sets out to be comprehensive — and it is. There are large numbers of architectural plans, maps and photos of buildings and developments throughout, focusing on neighborhoods from Queens, N.Y., to Portland, Ore., which help explain the chapters of the book.