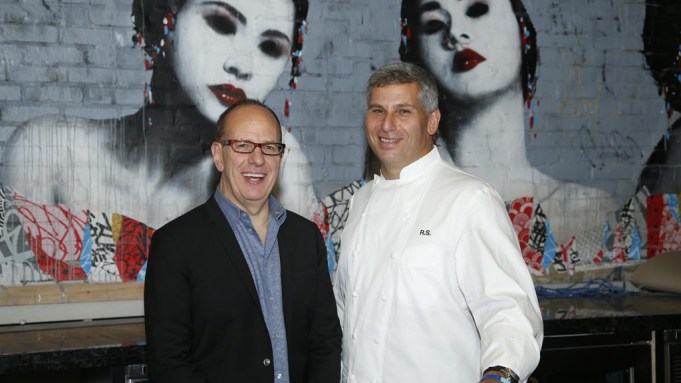 Tao Downtown, a sprawling 22,000-square-foot restaurant and lounge nestled in the heart of New York’s Meatpacking District, is not an entirely surprising addition to a corner of the city that boasts some of the largest and flashiest clubs and eateries, meant to attract tourists and the trendy alike.

Located at the Maritime Hotel, the venue, at first blush, appears to embody the holy trinity of clichés, beginning with Asian-fusion food and matching oversize Eastern decor, and ending with large, aloof doormen, who safeguard the entrance to the moodily-lit club.

Despite a handful of competitors nearby serving similar cuisine — see Catch, Buddakan, Morimoto and Cherry, to name a few — Tao is different, at least that’s what Tao Group owner Rich Wolf and Tao Downtown chef Ralph Scamardella have emphasized.

First the food: Scamardella and Wolf scoured foodie hot spots in Asia in order to unearth dishes that were new to the American palette. One such dish, “Snapper in Sand,” a flash-fried snapper in crushed peanuts, looks like sand and is Tao’s signature dish.

Scamardella stumbled upon the dish at a restaurant in Hong Kong. After begging the kitchen staff for the recipe, he finally broke them down by bribing them with a round of beers. Although this method wasn’t the norm, the chef was able to procure a trove of recipes, as well as some skilled help. During his travels, Scamardella recruited a handful of chefs from China, Singapore and Japan to move to New York and cook for Tao.

“They are all living in a house in Staten Island now. We brought everybody back,” Scamardella said, chuckling, before underscoring that Tao, which has a Midtown location in New York and one in Las Vegas, “has always been a restaurant first.”

While the size of both Taos has, in a sense, “overshadowed” the food in the past, Scamardella said all of that “is about to change.” But make no mistake, Tao Downtown, which is set to open on Thursday, is not a complete departure from its predecessors, noted Wolf, who explained that the genius of the Tao brand is its massive size and ability to be many things to many guests.

“We believe in dining as theater. For us, it’s a show,” he said, noting the grand 40-foot staircase in the bi-level, cathedral-like space, which is decorated with a combination of Eastern sculptures, two 16-foot Buddhas and colorful murals hand-painted by U.K. graffiti artist Hush.

The venue seats up to 400 and includes a sushi bar, a separate late-night lounge and four private dining rooms. It offers guests “options,” said Wolf, who noted that the group, which is behind Lavo, Avenue and Marquee, will open a slate of Tao hotels in the U.S. and abroad in the next two years.

Despite the chain’s expansion, Wolf emphasized that the essence of Tao isn’t to create another scene-y, big-box club.

“This isn’t a fist-pumping megaclub,” he said, admiring a sleek, shiny 40-foot-long bar found near the restaurant’s entrance. “But things sometimes degenerate to that.”