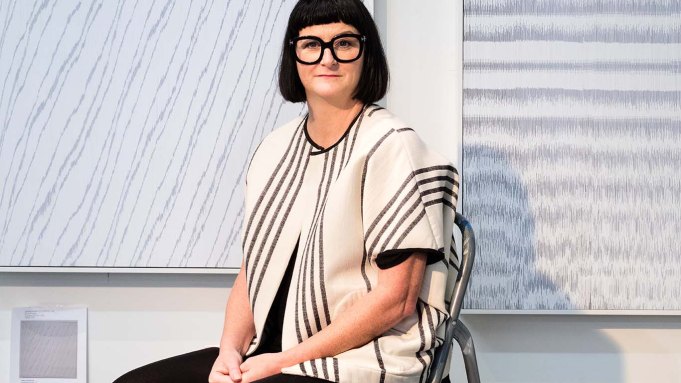 “My works always start with the material and then kind of goes from there,” artist Tara Donovan explains from inside her white-walled art studio in Astoria, Queens, cheery on a recent sunny winter morning. In the case of her latest series “Composition (Cards),” the work started from leftover material — 3×5 Styrene cards, shaped to mimic the standard paper index card — of a previous project. Her newest series features the cards stacked in different patterns, a continuation of her exploration of familiar, accessible materials transformed through massive quantities.

Classical music fills her multiroom studio as Donovan discusses her new works, which will be the focus of her upcoming show at Pace Gallery in New York on Feb. 17. Ten pieces from the series are also on display alongside pieces from her Drawing (Pins) series and a sculpture at Pace Palo Alto in California. While the New York art world can be fickle, her art is a particularly complimentary fit for the moneyed tech-centric community perched along the Bay Area; Mountain View is less than 10 miles away from the gallery, which popped-up in a former Tesla showroom in 2014 before relocating to a permanent location. “People in Palo Alto were so grateful that we brought the art to them,” Donovan adds, looking out from behind a pair of oversize black thick-framed glasses, which matched her jet-black Cleopatra hairdo.

She approaches the series as an exploration of the negative spaces created by a shuffled stack of cards. The resulting patterns range from abstract and organic to geometric; she used textiles and weavings as a starting reference for several of the pieces. “There’s all these different methodologies about how we could stack the cards, different logic that you could implement to create the pattern,” Donovan explains, pausing behind a row of her assistants all working on different arrangements of card stacking. “I’m referring to them as compositions. I see them as being very musical. They are very mathematical — once you start a pattern, there’s a system,” she says.

She describes the pieces as “sculptural paintings.” Working with an all-white material, Donovan discovered that she was able to produce three color reference points through shadows within the cavities between individual cards — white, black and gray. The card arrangements are bound book-style into square frames, typically measuring a uniform 38 inches by 38 inches and cut to be flush on the surface. Standing at a distance from each work, the visual impact is that of a painting or print; upon moving closer, the work transforms to become sculptural, with depth revealing itself.

“My true interest in what is happening here is what happens beyond the surface,” she continued, considering one of the square-bound pieces. “There’s this kind of image on the surface, but there’s a depth of surface that’s created by the space between the cards that becomes almost filmic in your movement beyond it,” she continued. “There’s some kind of visual shift that occurs.”

Working with a loyal team of assistants — who have each been with her for five to 12 years — she is able to complete a new composition in a week. Each artist lends a slightly different hand to the stacking process, leading to greater diversity and also provoking discussion around the results. “We’ve learned so many little things, you learn from failures and sometimes they’re really exciting,” Donovan added, pointing out a “failed” composition with an iridescent quality hanging on the wall, which still looked at home tucked among the tight lineup of work encircling the room. “Making art is all about paying attention and noticing, and being observant.”