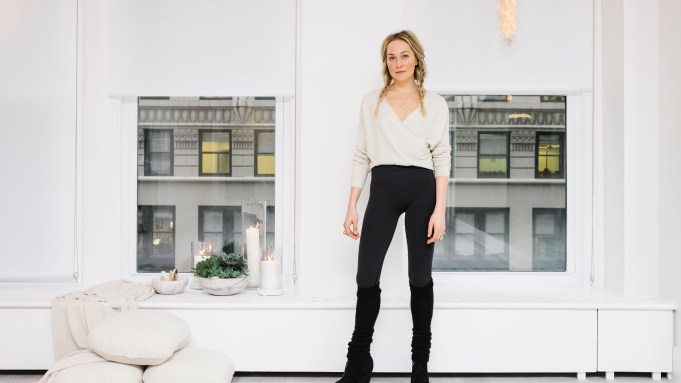 “Something was just not being fulfilled, and I realize now that it’s truly the soul,” said Taryn Toomey on a recent overcast afternoon. “When you don’t feel well, it’s because you’re not tending to that side of you.”

Toomey, the founder of boutique fitness darling The Class, was sitting cross-legged on the wooden floor of her new wellness studio in TriBeCa, acoustic music playing softly in the background. After building up a following for her holistic fitness class, first from her living room and then through Bandier’s Studio B and Danceworks, Toomey has finally opened a more permanent space for The Class to call home.

Her journey to The Class and into the wellness realm began during her years working in fashion, first at Ralph Lauren and then Dior. Finding herself unfilled with the corporate world and culture of “checking off boxes” of success, she decided to enroll in a yoga teacher training program, which ended up propelling a larger career shift. Following the death of her mentor Mama Kia in Peru, Toomey developed the concept for The Class as a way for her to deal with the grief of loss. “I really did it to heal, and I didn’t take any money for it because it wasn’t meant to be anything,” Toomey said of early iteration of The Class.

She began teaching her class to friends and the concept continued to grow, out of her living room and into Bandier’s Studio B and a downtown dance studio. Its longevity stems from The Class’ community of devotees, which has included Gucci Westman, Naomi Watts, Caroline Murphy, and Christy Turlington Burns, and helped buoy Toomey’s commitment to teach The Class amidst self doubt.

The Class combines elements of cardio, yoga, expression and meditation, and the introspective quality of the practice is central to her concept. “There’s a vibration that people can give off to take people down or lift people up, and you just have to be aware what direction you’re going,” Toomey said, pawing the rose quartz pendant around her neck. “And that’s really what this work is about. What is it that you’re saying in there, and what is it that you’re believing?”

It was one of her students who acted as a catalyst for the studio — he offered her his lease on the space after experiencing “a life-changing experience” during her classes. Toomey describes the built-out studio as “soft on the eyes, gentle on the heart, expansive in the consciousness, mindfulness and just with a whole ton of intention.” Translated, the space feels airy and serene, with white walls and crystal “sugar stick” pendant lighting hanging in the curved windows looking out at the utilitarian shops and eateries lining Park Place. Room accents include pots of succulents and orchids, and bowls of crystals. A mirror lines one wall of the studio and her jewelry collection, Airlume, hangs on the walls of the lobby, serving as artwork. The bathroom is stocked with beauty products by Chanel, who approached her for the placement; Tata Harper, and Smoke Perfume.

The original flooring of the studio was raised and replaced to be ergonomically sprung, and also contains a hidden elemental feature. “We have crystals under the floors, which some people might think I’m completely crazy, which is absolutely fine,” Toomey explained of the energy design by The Cristalline. “I think it’s all about the intention, and the intention of putting something in the foundation of a place where people are stepping in to process, and to work, to unite, and come together just sets the tone for what kind of home this will be.”

The studio will offer new classes, including a condensed express version of The Class, stress release classes, pre- and postnatal classes, and guest workshops. With a 10-year lease on the space, Toomey is invested for the long haul, and foresees another New York studio on the horizon, as well as eventually opening a studio for her L.A. classes.

Similar to the studio’s minimalism, the actual name — The Class — is the equivalent of an artist using “Untitled.”

“It’s not the place, like, the ultimate fitness experience. It’s the complete opposite,” Toomey explained of the name. “It’s just The Class — you come and make it what you want. If you want to sculpt your body and just have it be fitness, it can be that. If you want to have a place to come and grieve and process and heal, it can also be that. It can be every other thing in between.”