WWD asked six designers for the recipes for their signature dishes. 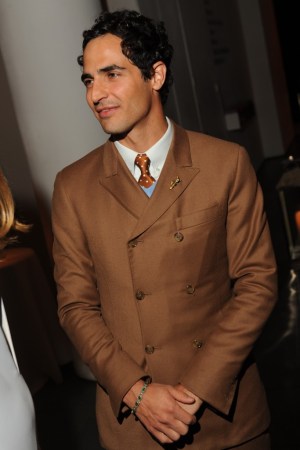 Thanksgiving is a holiday steeped in tradition. Invariably, we turn to the same comforting habits every year. “I normally decorate a chandelier in my mother’s dining room,” says Zac Posen. Harvey Weinstein swears by his one ritual: “I’ll eat blintzes with turkey,” he says. Michael Bastian, whose father was a basketball coach, has a standing appointment for a family basketball game. “I travel a lot, so it’s the one weekend a year where we always get together,” he says. The same is true in the kitchen. We swear by that one stuffing recipe that’s handed down from our most ancient forefathers and that pumpkin pie grandma used to make. We asked six designers for their signature Thanksgiving dishes.

Zac Posen:
I bake a lot at home. This recipe, my own, is a way to create a more exciting and sumptuous cookie that, albeit rich, is refreshing after a big Thanksgiving meal. The sweetness of the molasses perfectly marries the heartiness of the sesame seeds.

Take about a tablespoon-and-a-half of the dough and roll into balls. Slightly flatten with the palm of your hand and place on a tray. Bake for 10 to 15 minutes and allow 5 minutes to cool.

Lela Rose:
Once everyone has stuffed themselves on turkey, we take the leftover meat and grind it up with cream cheese, a little mayonnaise, flat-leaf parsley, and then roll it all in toasted pecans. My mother made this for years and now I do. This is the most delicious spread for crackers or sandwiches and I look forward to it every year.

In a food processor, pulse turkey, cream cheese, mayonnaise and parsley. Shape into a ball and roll in toasted pecans until it is coated. Refrigerate for at least 2 hours. Serve with crackers or on bread for sandwiches.

Nicole Miller:
I make Paul Prudhomme’s corn bread dressing every year. I met him a long time ago in New Orleans and have made the dressing ever since. We have Thanksgiving dinner in the office every year and it has become an office favorite as well.

Boil the giblets in water until tender, about 1 hour. Drain the giblets and (preferably) grind or very finely chop them. Thoroughly combine the seasoning mix ingredients in a medium-size bowl and set aside. In a 5½-quart saucepan, heat the butter and margarine over high heat until half melted. Add 1 cup of the onions, 1 cup of the bell peppers, ½ cup of the celery, and the garlic and bay leaves. Sauté about 2 minutes, stirring occasionally. Add the seasoning mix and continue cooking about 5 minutes, stirring and scraping the pan bottom frequently. Stir in the remaining ½ cup onions, ½ cup bell peppers and ½ cup celery, the stock, giblets, and Tabasco. Cook about 5 more minutes, stirring frequently. Remove from heat. Add the corn bread, milk and eggs, stirring well. Spoon the dressing into two greased 13-by-9-inch baking pans (preferably not nonstick types), spreading the mixture evenly in the pans. Bake at 350 degrees until browned on top, 35 to 40 minutes. Remove from oven and discard bay leaves. Serve as desired. Note: Be certain to let the dressing cool, then refrigerate it and chill it well before using it to stuff fowl. Makes about 16 cups.

Peter Som:
For the longest time, we have been making Pommes Anna. It’s a sophisticated French-y take on scalloped potatoes — and part of Julia Child’s repertoire — that makes for a fabulous presentation. It looks like a cake! Thinly mandolined slices of potato (believe me, you’ll need a mandolin) are laid out on a pan along with butter, finished in the oven and then turned out tarte Tatin-style. We follow the Julia’s recipe (with a few practical notes from us).

4 pounds boiling potatoes, thinly sliced
2 sticks butter, melted
Optional: a few springs of thyme!
Salt and pepper to taste
A touch of finely grated gruyère or parmigiano reggiano. (Our apologies to Julia but this helps with keeping the cake together.)

Blot the potatoes with a paper towel to remove some of the starch. Work fast, as the potato slices start to discolor quickly. No pressure! Preheat oven to 450 degrees.  Clarify the butter (melt and let the white pieces move to the top). Using a basting bulb, squeeze the end of it in the clear butter — use only this, otherwise the potatoes will stick. In a 10-inch cast-iron skillet or other very heavy pan, put in 1/4  cup clarified butter, arrange potato slices around the pan, covering the bottom in a design. Salt and pepper the potato layers, pouring on a bit more butter. Then salt and pepper and arrange the two other layers. Continue layering the potatoes, butter, salt and pepper, until the potatoes are all used. Take a smaller pan with a flat bottom and press down to compress the potatoes into a cake. Put in the oven for 20 minutes. As a precaution, put something under the potatoes to catch any butter that may spatter. Remove from the oven and press down on the potatoes again. Return to the oven for 25 more minutes. Remove to compress the layers again. You can return for 5 more minutes or, if you need to bake something else in the oven, finish the potatoes over the burner on low, until the main dish is cooked. Invert onto plate and cut into wedges.

Michael Bastian:
My mom’s Chex party mix recipe! Tasting that means the start of the holiday season for me.

Divide cereal and nuts between two large baking pans and set aside. Mix together remaining ingredients. Gently pour over cereal and nuts until evenly coated. Bake at 250 degrees for about 45 minutes, stirring every 15 minutes.

Reece Solomon:
My favorite Thanksgiving item, which my mother has made almost every year of my life, is a cranberry relish. It is different from most because the cranberries are raw rather than cooked.

Roast the walnuts in a pan, or bake at 350 degrees for 10 minutes, then chop. Wash and chop the cranberries in a food processor, though not too finely. Place in bowl, add sugar and mix well. Chop orange into small pieces and then add to berries with the rind. It can be made one or two days ahead, just add the nuts the morning you’ll serve it. Enough for four to five people.