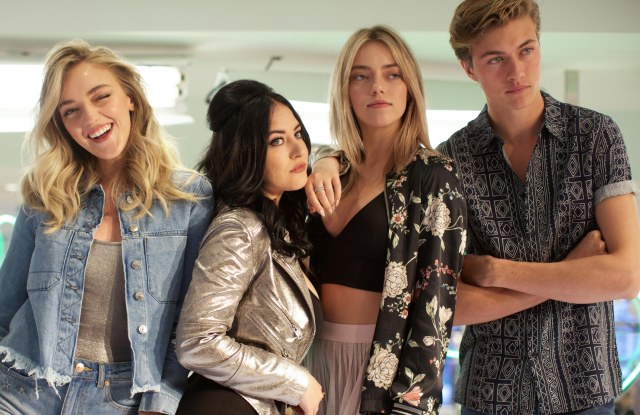 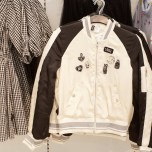 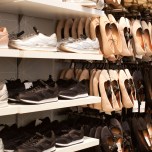 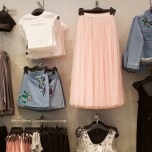 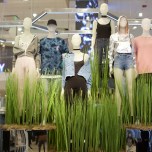 KEEPING UP WITH THE SMITHS: Pyper America, Starlie, Daisy Clementine and Lucky Blue Smith are the faces of H&M’s latest Coachella collection. The siblings, who formed pop-rock-surf band The Atomics in 2004, kicked off the collection’s launch with a performance at H&M’s Times Square location on Wednesday.

Decked out in H&M’s festival-ready pieces, the foursome revealed their H&M go-to’s, as well as their Coachella must-haves.

“I’m always surprised by what I can find at H&M,” said Starlie, wearing a silver faux-leather jacket.

“There’s always the good basics, but then there are always the really cool pieces,” added Daisy Clementine. “And they always have really good bags, too.”

“The Swedes know what they’re doing,” said Pyper, summing up their sentiments.

The foursome will play Coachella next month, marking the first time Starlie, Daisy and Lucky have ever gone to the festival. As a veteran Coachella-goer, Pyper had some advice on what to bring.

“You need some layers,” she said. “You need a jacket so you can wipe the sweat off your face or if it gets cold at night. And really, you should have good shoes. Don’t wear new shoes. I would say break in your H&M shoes before you go.”

The Smith kids are focusing on putting out new music through The Atomics, but also hinted at wanting to expand their multihyphenate careers. All four walked the runway at fashion week, with Lucky Blue walking Karl Lagerfeld’s space-themed Chanel show.

Lucky Blue, 18, also recently revealed via Instagram that he and girlfriend Stormi Bree, 26, are expecting their first child together.

“I kinda want to be surprised,” he said when asked if he’d like to find out the baby’s sex beforehand. “I’m just going with the flow, I don’t know.

“Everyone around me has just been telling me the ins and outs [of parenting] and just giving me a bunch of great support,” he continued.

His sisters also expressed their excitement to be aunts.

“We’re obsessed with babies,” Daisy confirmed. Lucky Blue explained that his sisters “grew up babysitting” and have loved babies ever since.

“We really love family so, there’s another new person,” Starlie added. “It’s gonna be so exciting.”

See More on Coachella From WWD.com:

Beyhive Bummer: Beyoncé Has Reportedly Dropped out of Coachella