Feast for the Eye: The Beatrice Inn Blooms

There's been a shift of late at the Vanity Fair editor in chief's latest Manhattan culinary venture. 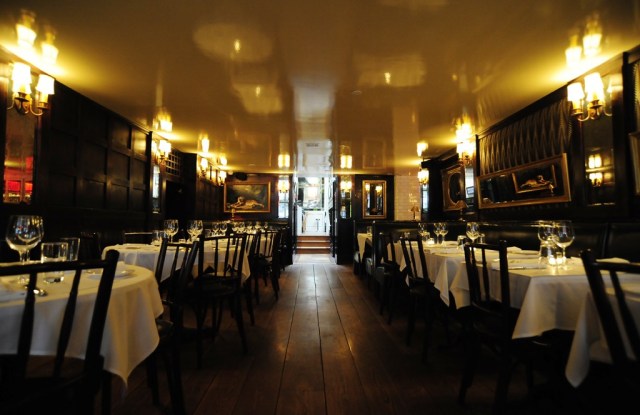 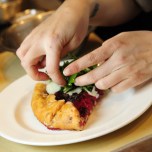 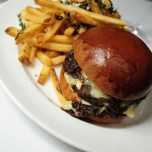 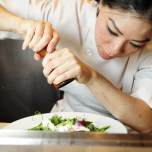 Graydon Carter has weathered the fickle winds of the Manhattan dining scene — discerning palettes, oversaturation, etc. — by sticking to a formula: refurbishing a storied spot with a new concept, new look and the same name. The Vanity Fair editor in chief and sometimes restaurateur is drawn to fixer-uppers with a past, dusting them off and repurposing them as eateries that are as much about the next-table-rubbernecking as about the food.

But at the Beatrice Inn, Carter’s most recent venture, there’s been a shift of late, with a refocus on the food since the hiring of Angie Mar, executive chef, in November. Mar rolled out a new spring menu this week. The shift is smart: A different approach is needed for the Beatrice, a spot with a more colorful and textured history than Carter’s previous acquisitions — and one the partners no doubt don’t want to repeat.

While at its inception it was a Twenties speakeasy and later an indistinguishable Italian spot, the Paul Sevigny era is remembered all too well: a door mobbed by a tangle of models, Olsens, art people and such. Inside, a dingy cellar constantly fogged up by dense cigarette smoke. It’s where the juiciest Us Weekly yarns of the mid-Aughts were born. Unlike other sleek hot spots of the time, the Beatrice was rough around the edges and unpretentious. That was its charm. Though it shuttered after only three years — predictably, due to accruing noise complaints — for its brief tenure, it pulsed with coolness like no other. When the club foundered in 2009, the clientele took it hard. It’s only recently that they’ve begun to warm up to Beatrice 2.0.

“The nightclub phase, I’m not familiar with. My kids are because we live around the corner so they knew the place,” Carter says. “I think the neighbors much prefer the restaurant to the old version. We wanted a simple American chophouse, a quieter place just for the neighbors.”

Carter hasn’t always had such an egalitarian approach to his projects with the Waverly Inn and, albeit less so, the Monkey Bar, both once renowned for the difficulty of securing a reservation. The Beatrice is aiming for something more approachable. “I mean, in New York City, nothing creates an appetite like unavailability,” Carter concedes. “But we wanted something accessible, that’s the way we designed it from the beginning.”

Carter and his partners, Emil Varda and Brett Rasinski, acquired the space in mid-2011. After briefly sparring with Sevigny over the rights to the name, the place was gutted and varnished as an old-timey supper club. It has a nostalgic quality to it, like a spot Neely O’Hara might stop by to glug Champagne between shows. The bar room and adjacent dining room maintain the structure (read: low-ceilinged and snug) of the Twenties speakeasy, now outfitted in dark wood, leather and crackling fireplaces. The back room is airy with a skylight and potted plants.

After 18 months of renovations, the restaurant opened in November 2012, in the eye of Hurricane Sandy. “Instead of customers, we had sandbags protecting the front door,” Carter says. “So we didn’t get up and running until about a week after our planned opening. We also had a rocky time with the food in the beginning.”

The kitchen turnover has been high from the start. Original hire Brian Nasworthy, a former sous chef at Per Se, was out after three months. Eric Korsh filled in as an interim chef for January and February 2013 until Hillary Sterling, an A Voce alum, was brought on. She left in November when Mar was hired. Carter thinks they’ve finally hit their stride. “The food has been so good under her,” he says, noting the restaurant has been more packed in recent months. “The burger is off the charts. I think about it at night.”

Said burger, one of two on the menu, is in fact quite spectacular. It’s 45-day dry-aged rib eye, short rib and sirloin sourced from grass-fed cows in upstate New York, topped with a mound of onions that have been slowly caramelizing in red wine for eight hours. Underneath a slice of melty imported fromage d’Affinois, a close cousin to brie. The bun’s good, too. The dish is a mainstay of the menu.

There is also size-two-friendly yet toothsome fare. The radish salad, which premiered last week, is dressed cleanly with sea salt, lemon and olive oil. The radishes are complemented with feta, mint, basil and a swirl of hickory smoked ricotta puree. “It’s so simple, but that’s the point,” says Mar, who last worked under April Bloomfield at the Spotted Pig. “We don’t want to mask the produce, drown it out. We want to keep the integrity of the ingredients. The thing is, these radishes are never going to be better than they are right now: bright, peppery and delicious. So why would we want to fuss with that?”

Mar’s culinary ethos is steeped in seasonality. She goes to the farmer’s market four mornings a week and crafts her dishes around what produce looks the best. “I picked that up when I was at the Spotted Pig and at Reynard,” she says. “At Reynard, these farmers from Massachusetts would come in at, like, one in the morning every night with these big garbage bags filled with produce. You never knew what you were going to get. And we’d just sort through it all and be like, ‘I want 10 pounds of this, I don’t want that, I don’t even know what that is but we’ll take it.’ It was like working on ‘Chopped’ or something.”

The menu doesn’t change daily, but rather, Mar gradually introduces new dishes with the turn of each season, after much trial and error. “I’ll find one ingredient that is just perfectly in season and I build a dish around it, that’s how we came up with our Chilean sea bass with the salt-baked Asian pear,” she says. “I became obsessed with these Asian pears. We didn’t know what we were going to do with it, but we had to work it in.” What she came up with was encrusting the pear in salt. The result is a salty-sweet innovation. “We cooked it literally a thousand different ways before I was like, ‘I have a kooky idea,’” she says. “‘Let’s bake it like you would a fish.’”

“Angie has a great deal of freedom within the space of that kitchen, which is about the size of a desk. It’s a miracle she does what she does in there. We trust her because her food is just so good,” Carter says of Mar, who isn’t obligated to run every variation by the partners.

“Plus, the customers are all coming back,” he adds. “Which is a great relief.”