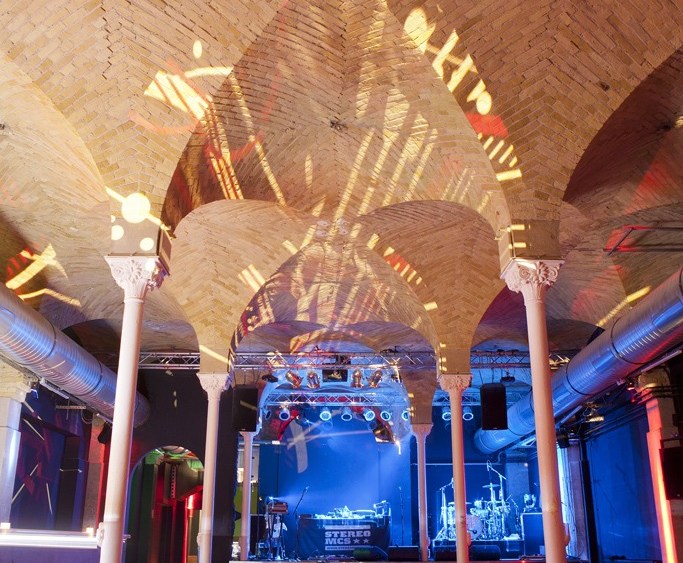 Catch some R&R in between the shows.

Myriad new nightclubs have landed in Berlin, but few have the impressive setting — or multiple personalities — of Gretchen. Dating back to the 19th century, the space once housed the horses of the 1854 Prussian guard and dragoon regiment linked to Queen Victoria of England. Its brick vaulted halls have now been transformed into a DJ, dance, stage and lounge area with cozy leather couches and a contrasting sleek white bar. But contrasts are part and parcel of Gretchen. The name conjures the image of a sweet girl, then the object of desire in Goethe’s “Faust,” and lastly hints at Gretchen Lowell, the serial killer in American author Chelsea Cain’s books. The styles of music are similarly two-faced, including electro and house, but also folk and jazz. Besides being a club, Gretchen changes into a concert space regularly. — JENNIFER WIEBKING

Berlin’s Museum for Communication is known for its family-friendly, multimedia exhibitions. Its latest, however, might garner a few fans from the fashion world. Fashion Talks looks at the unspoken language of garments, patterns, and trends — from creation to marketing. Visitors can decode uniforms and suggest a new sub-culture at a cleverly designed faux “Office for Youth Cultures” complete with official forms, while hands-on types have the chance to distress jeans and design their own tartans.

On display are looks from Vivienne Westwood, Kenzo, Lanvin, Junya Watanabe, Henrik Vibskov, Kuyichi, Diesel, True Religion and more. The end of the exhibition features a showcase for young designers from the region that will change monthly. January’s star is Berlin-based Danish men’s wear innovator Mads Dinesen. Also, as a bonus, the photo exhibit Fashion Food shows what happens when a star chef and a fashion photographer team up: kitchen couture. — SUSAN STONE

Flamingo argues for a new definition for “on the right side of the tracks” — as in, under them. The party people behind Broken Hearts Club dance nights and hot spot King Size bar have a new place under the S-Bahn rails in Hackescher Markt. Vintage palm-tree lamps cast a golden glow over low-slung blue velvet stools and armchairs corralled into cozy corners. Bar manager Rene Tempel, who has served time at London’s Match Bar Group and Berlin’s Soho House, provides a twist on traditional cocktails, including a saffron margarita that infuses key ingredients tequila and salt with rare seasoning, then blends with tart citrus. — S.S.

While most Berliners don’t go out of their way for a raw deal, vegan restaurants La Mano Verde and Kopps are starting to turn the tide. Now located in more spacious premises off Kurfürstendamm, Jean Christian Jury’s gourmet vegan eatery, La Mano Verde, turns out purely plant-based creations to entice both the eye and the palette. “My goal is to cook in such a way that nonvegans will love my food,” said Jury, whose homemade wild mango vodka, the base of many house cocktails, ensures guests will love his drinks as well.
The menu stars appetizers like mushroom, cauliflower and cedar seed cream quiche on a kalamata olive and thyme crust, main courses such as Capelli del Autunno, pumpkin and chestnut-stuffed ravioli with a sage and blue poppy seed glaze, and a cashew-based cheesecake for dessert. The two- and three-course lunch menus, priced at about $13.75 to $18.75, are perfect entry points for sceptics, while Jury’s “Vegan für Geniesser” (“Vegan for Aficionados”) cookbook, which went on sale this summer, allows home chefs to work through the menu.

Across town, Kopps tastefully makes the point that a vegan dish and a hearty German meal are not mutually exclusive. Headed by vegan chef Björn Moschinsiki and his two carnivore business partners, Kopps dishes out politically correct soul food. The menu includes soy roulade, soy pasta Bolognese and nut roast, all prepared from vegan ingredients. But while the food has a specific focus, Kopps is an all-rounder when it comes to its opening hours. The day starts at 8:30 a.m. with breakfast on weekdays and with a 10 a.m. brunch on weekends, and ends long after midnight at the well-stocked bar. For those looking for extra privacy in between the mix of vintage and new wooden interior, there’s a cozy separate dining space for parties of four. — MELISSA DRIER and J.W.

For those in search of some great ground round, the situation in Berlin is definitely on the uptick. The latest case in point: Zsa Zsa Burger in Schöneberg, which blends a big pinch of humor into its burgers. Contrary to popular belief, this little restaurant has nothing whatever to do with Miss Gabor, though she’d look right at home in its semicamp Swiss chalet chic interior. Rather, Zsa Zsa is the pet nickname for Elisabeth, the name of the grandmothers of both owner Ernesto Kuoni and his business partner.

“So it’s an homage to old ladies. Plus I have some Hungarian blood on my mother’s side,” Kuoni said.

Kuoni pays a daily visit to the butcher to pick up his meat, and the sourdough or whole-wheat rolls are backed fresh each morning. Beyond the classic beef, served with a side of the best coleslaw in town and real home fries, there are 18 other renditions, including the Hangover burger with Swiss cheese, bacon and a vodka shot on the side; the Dumb Dora with sautéed goose liver, fried quail eggs (from Ernesto’s own garden brood) and apricot chutney; the Free Willy Burger — of fish, naturally; the vegetarian Fake Prince and Magic Mushroom burgers, or weekly specials like the Daffy Duck Burger composed of fried duck served with hoisin, yogurt and plum dip, and red cabbage salad. — M.D.

He was a photographer of the moment — unforgettable moments of daily life in Berlin, during the Weimar Republic (1919-1933), among the ruins of postwar Berlin. “Of Hippos and Other Humans,” the retrospective of German photographer Friedrich Seidenstücker at the Berlinische Galerie, brings together 200 original photographs taken in Berlin between 1925 and 1958. Many are subtle observations of the city’s inhabitants, stumbled upon during Seidenstücker’s walks through the metropolis. But a large number of his images recorded moments full of bizarre humor, especially those of the animals he painstakingly studied and photographed at the Berlin zoo. His lighthearted optimism is even present in the more serious motifs of war and postwar periods. And it is this optimism that continues to earn him a place in the hearts of Berliners today.

At the same time, the Berlinische Galerie is hosting a show of Hungarian photographer Eva Besnyö (1910-2003). Besnyö turned her back on fascist Hungary in 1930, moving to Berlin, where she immersed herself in the city’s spirit of experimentation. Her time in the city was short-lived, however. Fleeing the rise of the National Socialists, she left for Amsterdam in 1932, where she quickly forged her reputation. Forced into hiding when the Germans invaded Holland in 1940, the Jewish photographer became known as a neo-realist, humanist and feminist in her later years. This is the first retrospective of her work in Germany. — M.D.

After teaming up for summer’s Tokyo Gakudan fashion week charity project of presentations and a pop-up shop, Natalie Viaux and Huy-Thông Tran Mai decided to create a permanent place to showcase Japanese designers and other things they love. Oukan 71 is part concept store, part tea bar-restaurant, and all passion.

“When we call it a concept store, we’re really working with a concept,” said Viaux. “Just to sell clothes would be banal.”

And that, Oukan 71 is not. The fashion offering is 60 percent Japanese with 40 percent from elsewhere, with resources like Mabuya Mabuya, Berlin’s Antonia Goy and Bergen’s Norwegian Rain. Hussein Chalayan and A.F. Vandevorst are coming soon.

Oukan 71 aims to attract a cultured crowd that might have more money than taste, so the owners try to keep prices reasonable. It also hosts literary and culinary events. — S.S.

HER NAME WAS LOLA

For lovers of retro references, the historic Babylon cinema is presenting a vintage Hispanic fashion film series in conjunction with the Instituto Cervantes Berlin. “Die Moderne Lola” (“The Modern Lola”) is curated by Spanish/Colombian fashion designer Ricardo Ramos, who now calls Berlin his home. Ramos studied at the Paris American Academy, Central Saint Martins and the Lemark Institute in Mumbai, and has shown collections in conjunction with fashion weeks in Barcelona, London, New York and Berlin.

Ramos, whose work often draws from traditional textiles and hand techniques, said he’s inspired by the wave of women’s emancipation that started in Spain in the Twenties, and moved through several Spanish-speaking countries from the Thirties onward.

“My intention with this film series is to show from different perspectives how women adjusted their social roles in different Hispanic countries at that time, and how women started making use of fashion, manners and a strong femininity to reach their goals,” said Ramos.

The program includes Spain’s first filmed musical, 1935’s “Abajo los Hombres,” about a man-hating woman who inherits a ship and its crew; Argentina’s “La Fuga,” a tango-tinged thriller from 1937, and the 1932 romantic melodrama “Santa,” the first Mexican narrative sound film.

Along with the film series, Ramos will also show his fall collection “Die Moderne Lola” on Jan. 19. The collection, which lends its name to the film series, blends inspiration from these historic women’s emancipation narratives with touches of Berliner style from the period between the two World Wars. — S.S.

NEXT: The Gilded (Drinking) Age >>

If a former Prussian king and a trendy Berliner were trying to decide on a place to have drinks together, they would probably end up at August II. Like most watering holes in the neighborhood, the place has an unadorned facade and door. But once inside this small Auguststrasse bar, one feels transported to some Gilded Age. There are gold painted walls, some plastered with antique framed mirrors, a massive glitzy chandelier and a series of traditional Chesterfield sofas. Still, the feeling is uncomplicated and heartwarming, catering to real Berliners. — J.W.