“00:58xy” features photographs of 17 chefs gussied up in face paint, sometimes with wigs or jewelry; food photos and recipes, and reams of poetry. 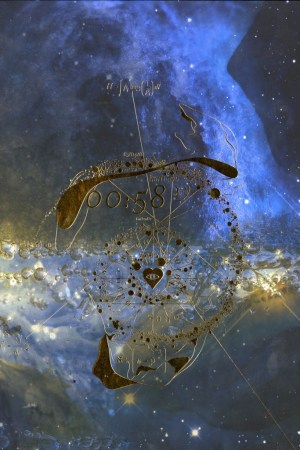 It’s very French. There’s a big new book called “00:58xy,” created by Mary Laetitia Gerval, which comes in a rich-looking gold and midnight blue slipcase detailed with the Great Nebula in the Constellation of Orion, along with various mathematical, chemical and alchemical formulas. The title, she writes, “is simply the approximate ‘hour’ where a chef meets the person, ‘xy,’ he loves.” It features photographs of 17 chefs — among them, Bruno d’Angelis of La Vieille Fontaine, Michel Kayser of L’Alexandre and Eric Sapet of La Petite Maison de Cucuron — gussied up in face paint, sometimes with wigs or jewelry; food photos and recipes, and reams of poetry. The book was conceived, shot and written by Gerval, who, with chef Christian Etienne, published “Fables,” in 2007, which won a Gourmand Award for best first cookbook and proved to be a bestseller. Two years later, she launched a publishing house, Gerval, with the proceeds.

For this, the house’s first book, she approached the chefs, asking them to help underwrite it. Eric Ripert, chef and co-owner of Le Bernardin in Manhattan, is planning to sell 200 copies, embossed with his name on the spine, at the restaurant for $500 each, in order to raise what he hopes will be $100,000 for City Harvest, a charity he has been involved with for 20 years and where he currently serves as cochairman of the board.

“One day, out of the blue, a French lady came here, and she showed me a pamphlet and the idea of this book,” he says. “It felt very different, very arty, and I wanted to be involved.” The book, he adds, was “about love,” and “Some of the pictures were pretty racy.” They’re fanciful, at times outlandish, and reminiscent of the work of Pierre et Gilles.

The recipes are meant to be romantic; Ripert’s include Perigord Truffle Bread; Golden Basmatic Rice, made with sliced almonds and edible 24-karat gold leaves, and Plum, Yogurt, Rhubarb, which consists of greengage plums, yogurt sponge and rhubarb compote. The introduction is in the form of a Q&A with Michel Onfray, a French philosopher known for advocating hedonism, atheism and post-anarchism.

A sample: “What is the nature of the relationship between food, love and sexuality?”

Onfray: “All three activities are three variations on the same theme: the jubilation of the body. To cook, to enjoy a meal, taste a wine, desire someone, rejoice of someone’s energy, gloat at someone’s sensuality, caress, touch, mix the skins are interchangeable activities; you can desire a wine, taste someone…”

Ripert says of City Harvest, “They are ultra-efficient. They have an amazing facility, and they do such a tremendous job in New York.” Then he rattles off the statistics: “In the Bronx, one child out of three doesn’t know where his next meal is coming from, and one out of five in the city.”

He practices Tibetan Buddhism, and his dedication to the charity comes partly from a private audience he had with the Dalai Lama. “He said to me, ‘You know, if you have to do something in life, make sure to feed hungry people.’”