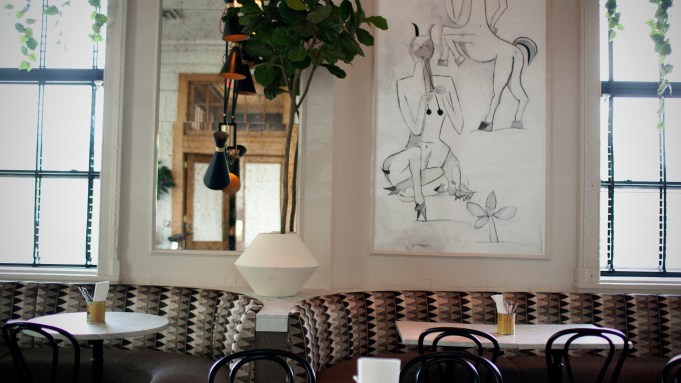 The Jane Hotel is on its way to becoming a one-stop shop for a night out. The already bustling rooftop and ballroom attracts the young downtown set, and the dining space recently occupied by Cafe Gitane has been taken over by Matt Kliegman and Carlos Quirarte of The Smile, who also operate the two establishments above. And now, the hotel features Kliegman and Quirarte’s Italian restaurant Old Rose.

“I used to throw parties in this space in 2006, long before it was [Café Gitane],” Kliegman says from a window seat inside the restaurant, which is now open. “The goal was to have a restaurant that was fun, accessible, didn’t take itself too seriously but did do things at a high level, and [we wanted to] do whatever we could as artisanally as we possibly could,” says Kliegman.

The result is a jack-of-all-trades approach to dining that appeals to true foodies with bread baked in-house, rotating homemade pasta and homemade mozzarella, as well as late-night revelers in the mood for pizza and beer.

“On one hand, it feels rational and there’s silverware on the table and the music’s fun, we’ve got beers from every different borough, and eventually I think we’ll have pitchers of beer and cocktails by the pitcher,” Kliegman says. “But there are things that your average place that might serve a menu that’s similar is really not doing things as [well] as we are. On a Saturday night, we’re going to be open until two in the morning and you’re going to come and you’re going to be hearing Drake and eating pizza and having oysters and having fun, but eating things that are locally sourced.”

As for the name, Kliegman and Quirarte were inspired by the hotel’s nautical ties. “The hotel was built in the first decade of the 1900s; it was a place for sailors to come hangout. And when the Titanic hit the iceberg and when survivors were ferried eventually to New York harbor they stayed here,” Kliegman says. “So when we were kicking around names, and in the spirit of not taking ourselves too seriously, Rose was the character from the movie and Old Rose is the storyteller in the film. You can keep riffing on that whole theme of being cheeky and not taking yourself too seriously — but at the same time the movie did win a s–tload of Academy Awards.”