The locavore food movement has put down roots in Los Angeles. Here are some of the latest and greatest. 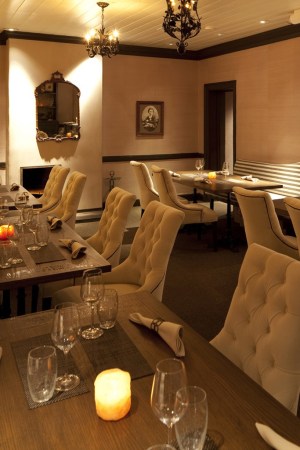 The locavore food movement is sweeping the nation, piling locally sourced meats, seafood and produce onto diners’ plates. A nexus for healthy living and trendy eateries, California is home to a plethora of restaurants and food shops that make the most of what’s grown in their backyard. Here are some of the latest and greatest.

Origins: Originally built in 1833, the building was used as a newspaper press, pharmacy and governor’s mansion before housing the restaurant that opened in June.

The chef: Levi Mezick honed his skills at Daniel, Café Boulud, Oceana and Thomas Keller’s Per Se before opening Restaurant 1833 with the founders of the Pebble Beach Food & Wine Festival.

Loco for locavore: Dave Bernahl, the restaurant’s co-founder, said the location in California’s Central Coast opens doors to the best ingredients. Mushrooms are foraged in Big Sur and the cooks harvest their own salt on the beach. “We have first pick of the best things that come out of the country in our backyard,” he said.

Fun fact: Often featured on ghost tours, the building is said to be haunted. Bernahl said the rep doesn’t hurt. “Everybody digs it,” he said. As do the ghosts. “They’re calm and cool because we remodeled the spot,” he said.

Origins: N/Naka is named after chef and owner Niki Nakayama, who opened the 26-seat modern Zen nook last April. A graduate of the Southern California School of Culinary Arts, Nakayama worked with sushi masters at Takao and Mori Sushi before running Azami Sushi on Melrose Avenue for eight years. She studied the art of kaiseki, or the highly ritualized multicourse meal characterized by detailed presentations and subtle flavors, at a hot spring inn in northern Japan. To ensure that she has a steady supply of rare Japanese vegetables such as chirimi kabocha, she partnered with Farmscape to grow her own in urban raised-bed gardens.

On the menu: The multicourse meals cost $110 for a nine-course menu and $165 for 13 courses. Wine pairings from the restaurant’s 480-bottle cellar and 17 sakes cost an additional $55 a person. “We try to create a menu that has a good flow,” Nakayama said. She’ll even try to accommodate vegans and vegetarians. But fussy eaters shouldn’t ask her to cut a piece of sushi in half or substitute too many ingredients. “When things get altered, it might change the whole feeling of the dish and the sensation of it,” she said.

Signature dishes: Pasta with a Japanese base, such as spaghetti in abalone liver sauce with garlic, truffles and mentaiko cod roe.

Origins: Jump-started by an advertising sponsorship from Microsoft, the food truck started hitting the road this past spring as an extension of the two-year-old catering business bearing the same name that’s based in L.A.’s Eagle Rock neighborhood. It’s been such a smooth ride that Heirloom LA was named best gourmet food truck for 2011 by Los Angeles magazine.

The chef: Matthew Poley, a veteran of Los Angeles’ Angelini Osteria and former intern at Civitella del Lago outside of Orvieto, Italy, is enhancing his rustic Italian flavors with charcuterie and seafood prepped by cooks who came from the seasoned kitchens of Providence, Craft and Café Stella.

Signature dishes: Peanut butter and jelly donuts and lasagna that is baked in cupcake molds and available in 40 different flavors, including osso buco and roasted vegetable caponata.

To the table: Heirloom LA is diversifying its menu beyond the chicken and steak requested at weddings with the help of foragers and small farms that deliver 300-pound pigs, rabbits, zebra heirloom tomatoes and other seasonal ingredients. Last month, it opened a tasting room called the Salon, where its chef can cook whatever he wants — with a twist. “It’ll be set up like a Benihana with a big donut table. Matt will cook in the middle,” says Tara Maxey, Heirloom LA’s co-owner and pastry chef. “That’ll be a riot.”

The founders: Marta Teegan and Robert Stelzner are trained art historians who recognized a need for fresh produce in their neighborhood. Teegan is the only one with actual food experience; she went to cooking school and runs another business called Homegrown that installs edible gardens for residents and restaurants.

On the shelves: Cookbook works with farms that span the distance between Ventura, Calif., and San Diego. It also sells meat from Marin Sun Farms, chocolate from Mast Brothers Chocolate in Brooklyn and two-foot-long pasta imported from Italy’s Maestri Pastai. “Ninety percent of my job is begging [and] trying to get smaller producers to work with us,” Teegan said. “It’s definitely food that we like to eat first and foremost. And it’s definitely our minimum requirement that it be responsibly grown and produced, meaning no damage done to the environment, no damage done to the animals.”

Learning annex: Last May, Cookbook took over the neighboring space vacated by a shoe store to teach classes. Because the site doesn’t have a kitchen, Teegan and Stelzner got creative with their food-related lessons. Topics have included cheese courses and ikebana with fruits and vegetables.

NEXT: The Farmer’s Kitchen >>

Origins: Occupying 1,500 square feet in the heart of Hollywood, the cafe uses produce and ingredients from the popular Sunday farmer’s market that is located steps away. Closed Monday and Saturday, the Farmer’s Kitchen also prepares school lunches and regularly sells out classes on how to can tomatoes, preserve peaches and other food-related topics.

Cook’s quirks: Executive chef Ernest Miller refuses to serve tomato soup in January because tomatoes aren’t in season then. But he’s got an open-door policy when it comes to recipes. “We have no secrets and secret recipes,” he said. “I encourage people to do it at home. You’re going to eat healthier. You’re getting to eat better because you’re eating seasonal.”

Origins: The hotel is a Tinseltown landmark, but its Windows Lounge and Cabana Restaurant are power lunch and breakfast spots known more for traditional fare. Given the increasing number of health-conscious actors who nosh there, it was only fitting that the Young Hollywood Salad made its debut on the menu in August.

Inspiration: R.J. Williams, founder of multimedia company Young Hollywood and a full-time resident of the hotel (the taping studio for the company’s celebrity interview show is also located here) inspired executive chef Ashley James to create the dish. “Californians are blessed with amazing local produce in their backyards,” said James. “Why not create a signature item that reflects that and the clientele as well?”

Ingredients: The moderately sized salad, $22, is composed of locally grown strawberries, avocados, cucumbers and field greens, with a healthy dose of hemp seeds sprinkled on top. James has also begun to infuse the popular Sunday brunch buffet with seasonal fruit and vegetable dishes inspired by his daily trips to the Santa Monica and Hollywood farmers markets.

Origins: The Bay Area mini-chain was founded by Matthew and Terces Engelhart, who opened the first Café Gratitude in San Francisco in 2004, followed by seven more. The first Los Angeles door, managed by their son Ryland, opened in March, with a Venice Beach location due next March. The Engelharts live on a 21-acre farm in Vacaville, Calif., which supplies 50 percent of the produce, while the other half is locally sourced.
Fans: Jake Gyllenhaal (with dog Atticus) is a lunchtime fixture, as is Agape founder Michael Beckwith.

Signature dishes: The 100 percent organic vegan menu, cooked and raw, features almond and hazelnut milk smoothies with names like I Am Grace and I Am Luscious for $8.50. The I Am Grateful kale, brown rice and black bean bowl requires a donation only and no one in financial need is turned away. Customers can support the program by ordering one for themselves and donating another for $14.

Committed: A five-day raw food and drink program called I Am Cleansed can be picked up fresh each morning (or the night before) for $400 ($300 for meals and $100 for personalized counseling from nutritionist Elissa Goodman).

Signature dishes: Savory sweet potato pancakes made with corn and cilantro are served with a blueberry chipotle jam and chili lime yogurt, while the sweet version is served with maple syrup and soy butter. KindKreme offers waffle cones and ice cream cookie sandwiches along with banana splits.