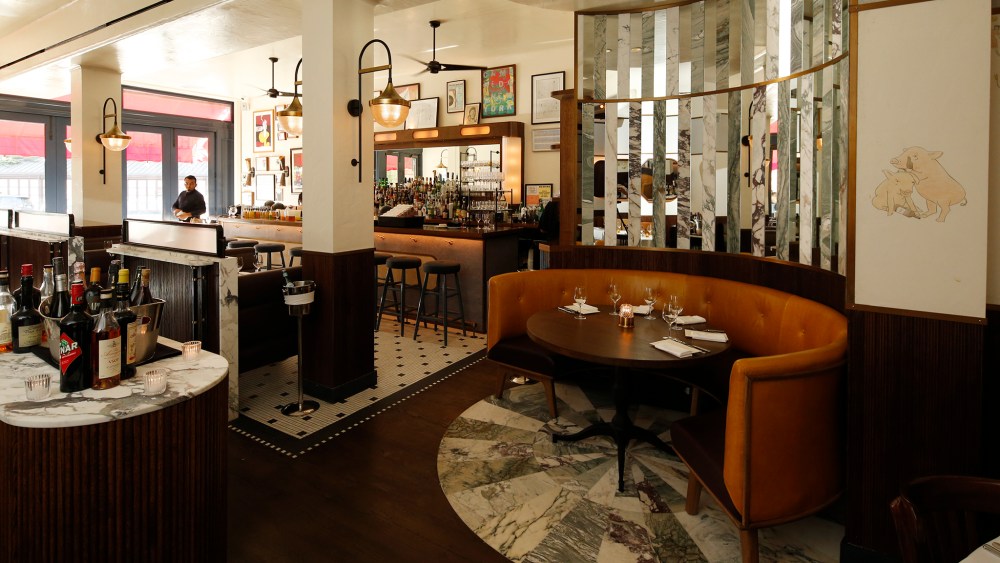 After a career at New York hot spots like Narcissa, Dovetail and Nix, chef John Fraser has expanded to the West Village corner of Bleecker Street and Seventh Avenue with The Loyal, a modernized take on an American brasserie.

“My first job in restaurants was in American brasseries that were really solid, good food where people could eat right — and I say the word ‘eat’ that way given the stigma of dining, which is sort of this process of taking your time and going through multiple courses, versus sitting down, getting nourished, having a couple of drinks and going along your way,” Fraser says. “And as I’ve gone through my career I’ve felt some departure from that kind of simple, straightforward [cooking]. This is meant to take on the idea of ‘what if the American brasserie was invented today?’”

A prime example of his ideal way to cook is his take on a burger. “It’s seasoned beef topped with cheese and a roasted tomato. The roasted tomato we essentially trapped in the middle of the tomato the flavors of ketchup, so that when you smash it onto the top of the burger, the flavor of ketchup is there sort of secretly,” he says. “We put mushroom powder and miso and some brown butter lacquer around the tomato. It kind of is the story of the restaurant: it can just be a delicious burger with a tomato on top, or we can talk about the technical [way of] how we got it there.”

When it came to matching the decor to the concept of the cooking, Fraser tapped a friend from Culver City to create cheeky little drawings along the wall. “As we were nearing the end of design it was starting to feel quite heavy and cheffy, and to go back to the West Village and how we wanted people to feel, we needed to make sure that there was some levity,” Fraser explains. “The conversation was to personify some vegetables and animals that we’ll be serving and let them kind of let them have this little story of their own. It might feel silly and tongue in cheek; if you don’t look that closely it just looks like two drawings but if you look a little closer you can see the cow smoking and the carrots lounging, and pigs [literally] in a blanket.”

Eli Halili Settles Down in SoHo

Sarah Gadon on Becoming the Next Margaret Atwood Heroine