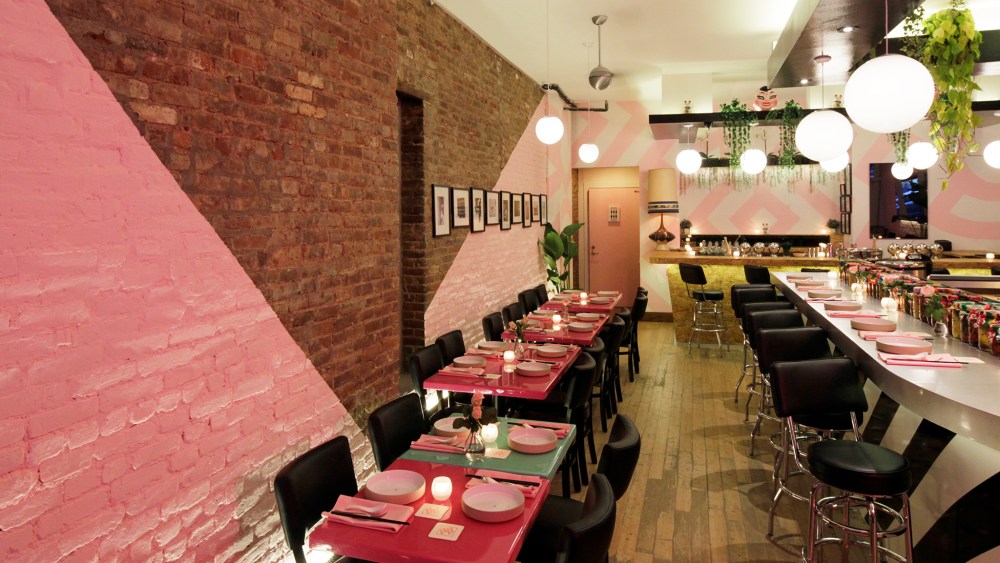 “It’s the whole farm-to-table thing, with the bees,” Rupert Noffs insists on a recent icy afternoon. “They pollinate our food. Without them we wouldn’t be here.”

Touché. Noffs and partner Matty Bennett are exploring the fruits of the beekeeping world with their new restaurant The Lucky Bee, opening today in Manhattan’s Lower East Side.

The restaurant serves modern Southeast Asian cuisine, inspired by the Thai street food Bennett and Noffs fell in love with over their many sojourns to the region. It marks the first solo venture for Bennett, who was previously sous chef at fashion’s beloved The Fat Radish.

Bennett and Noffs, who married in September 2014, met not through food but rather on a cruise in 2003, where they were both working. “I was a DJ and sound technician, and Rupert was onstage as a dancer/actor,” says Bennett, who is from Manchester, England. Noffs studied acting at Australia’s National Institute of Dramatic Art, alma mater of Cate Blanchett and Mel Gibson. “It paid $3,000 a week and I was 18 so I was like, ‘Yes, see you there!’” he says of how he ended up on the ship, which sailed from Hull to Rotterdam. When the boat docked, Bennett joined Noffs in his native Sydney, and they’ve been talking of opening a restaurant ever since. “It kind of makes sense, if we collaborate,” Bennett says. “I’m in the kitchen, Rupert does the design — we can do a restaurant together.”

Before the dalliance in DJing, Bennett completed three years of catering school in Manchester. Upon arrival in Sydney he got a job at Longrain, an upscale Thai restaurant with locations in both Sydney and Melbourne, where he worked his way up to sous chef. After five years in the kitchen there, he and Noffs came to New York in 2011 and Bennett soon landed at The Fat Radish, and later helped open The Leadbelly, where he was head chef.

The real planning for The Lucky Bee happened when Bennett left The Fat Radish to become a private chef for “billionaire families” as he calls it — he once baked a coconut cake for a dinner party at which Martha Stewart was a guest. “She said, ‘Now that’s a coconut cake,’” Bennett recalls.

Though this is Noffs’ first time in the restaurant world, he is paired with quite the teacher. “I taught him as much as I know about the front of house,” Bennett says. Noffs did his own research: “I bought ‘Running a Restaurant for Dummies,'” he jokes. But his real training came from his background in retail. “The front of house, you either know it or you don’t,” he says. “It’s customer service. Retail, hospitality, it’s the same.”

The menu has three sections, and everything is designed to share. Dishes include oysters paired with a lime, chili and coriander root dressing; sesame and pork dumplings; a smashed cucumber dish with peanuts, sweet rice, vinegar and coconut milk, and Sichuan salt and pepper wings dressed in a tamarind glaze. “About 80 percent of our vegetables are locally sourced; that’s really important to me,” Bennett says, “especially with my background at The Fat Radish.”

Dishes are complemented by a selection of six cocktails, which use honey instead of sugar, and a dollar from each sale of their “karma cocktails” will benefit the New York Beekeepers Association. “I think it’s really cool that New York has an urban beekeeping scene,” Bennett says. The restaurant name, and therefore the honey connection, stems partially from Matty’s nickname, Bee.

The bee connection is more than just a source of inspiration; Bennett and Noffs hope to lend their space for the monthly beekeepers association meetings, and plan to sell honey soaps and beeswax candles in the future.

The Lucky Bee sits around the corner from The Fat Radish, and across the street from the couple’s apartment — incidentally extending the farm-to-table thing. They hope to someday have hives on the Lucky Bee roof as well, though their landlord might need some convincing.