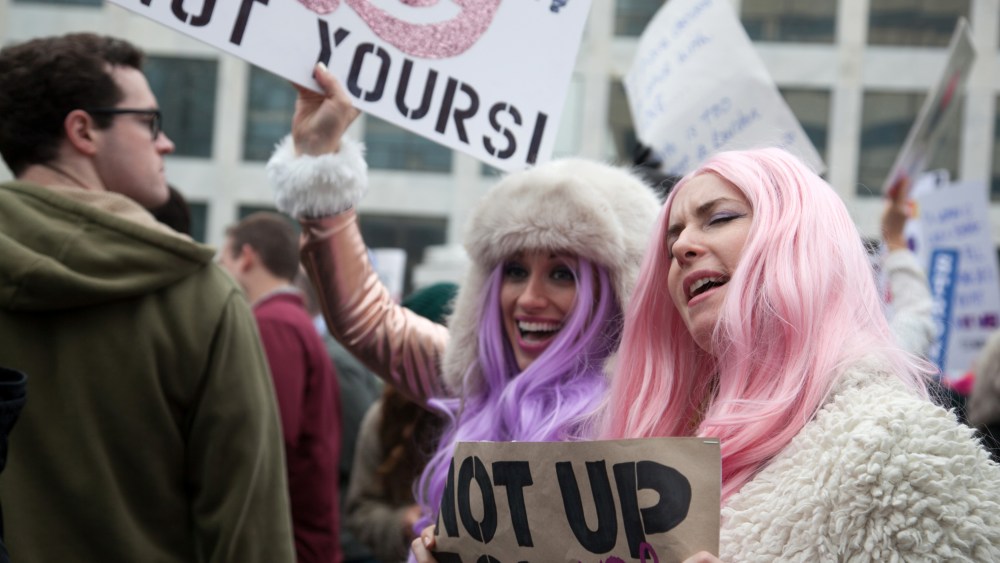 WASHINGTON — The Women’s March on Washington, seeking to raise awareness about women’s rights, civil rights and a host of other social issues including a not-so-tacit rebuke on the presidential election, broke more than a few barriers and could go down as the largest demonstration ever recorded in the nation’s capital.

The march, which reportedly drew an estimated 500,000 people, covered a breadth and scope of people and issues the likes of which this country has rarely seen.

By comparison the March on Washington for Jobs and Freedom on Aug. 28, 1963, where Dr. Martin Luther King Jr. delivered his historic “I Have a Dream” speech on the steps of the Lincoln Memorial, drew an estimated 250,000 people.

While the organizers took pains to stress the march on Saturday was not an anti-Trump protest, the words, signs, songs and voices of hundreds of thousands of people who thronged to Capitol Hill, the National Mall and the Washington Monument, belied that assertion.

The underlying and overlapping messages were an indictment of President Donald Trump, who was inaugurated the day before in nearly the same spot. But ultimately it was also much more than that, a happening that the organizers hope will foment into a movement.

The march eclipsed Trump’s more muted inauguration and swearing-in ceremony, not just in sheer size but in the power of the message that the organizers and protesters brought to the streets on Capitol Hill and in several cities around the country.

MORE ON THE WOMEN’S MARCH:

What Trump’s inauguration lacked in celebrity power, the Washington march more than made up for.

Scarlett Johansson, America Ferrera, Ashley Judd,  Michael Moore, Alicia Keys, Gloria Steinem and other high-profile activists  all spoke or performed on a center stage and  took part in a nearly four-hour program, not to mention the celebrities joining in the march, including Patricia Arquette, Maggie Gyllenhaal and countless others.

The fashion world was also well represented and many designers raised funds for the march in the days leading up to it.

Bob Bland, chief executive officer and founder of Manufacture New York, who is a cofounder and cochair of the march, said there were 600 sister marches worldwide with some 3 million people participating.

“We are breaking down the walls between each other today and standing united in solidarity for our rights and for the rights of the most marginalized among us,” Bland said. “Together we will show a new face of America, a spectrum of color consciousness and inclusion like never before.”

Bland said the march represented the beginning of a movement and called on the hundreds of thousands of people to fill out postcards and send them to elected local, state and federal officials outlining their concerns and issues.

She said the postcard is the first step in a total of 10 the organizers plan to take in Trump’s first 100 days in office.

Those words uttered by Latina activist and actress America Ferrera kicked off the Women’s March on Washington and captured the zeitgeist of the massive event.

“It’s been a heart-wrenching time to be both a woman and an immigrant in this country — our dignity, our character, our rights have all been under attack — a platform of hate and division assumed power yesterday,” Ferrera proclaimed. “We march today for the moral core of this nation against which our president is waging a war.

“But if we commit to what aligns us, if we stand together steadfast and determined, then we stand a chance at saving the soul of our country,” she added.

The sea of marchers swathed in pink “pussy” hats and emblazoned with slogans erupted. The streets around the capital were so clogged that people could not move in or out of any given area.

Madonna, who said she had been thinking about blowing up the White House since Trump’s victory, threw a few f-bombs into her remarks.

“Welcome to the revolution of love to the rebellion, to our refusal as women to accept this new age of tyranny; where not just women are in danger but all marginalized people; where being uniquely different right now might truly be considered a crime. It took this horrific moment of darkness to wake us the f—k up.”

Ashley Judd whipped the crowd around the main stage into a frenzy reciting a poem entitled “I am a Nasty Woman,” which was written by a 19-year-old young woman from Tennessee named Nina Donovan.

“I am a nasty woman,” Judd said, reading the opening line of the poem.

“I’m not as nasty as a man who looks like he bathes in Cheeto dust,” Judd said. “I am not as nasty as a Swastika painted on a pride flag. I didn’t know devils could be resurrected but I feel Hitler in these streets — a moustache traded for a toupee.”

She went on to say she is not as nasty as “turning rainbows into suicide notes. I am not as nasty as racism, fraud, conflict of interest, homophobia, sexual assault, transphobia, white supremacy, misogyny and white privilege.”

Johansson, a fiercely private person, voiced strong support for women’s health and reproductive rights, telling the crowds a personal story about visiting Planned Parenthood when she was 15 years old, which Congress has vowed to defund, primarily because of the abortion services it provides.

She called on the crowd to stand up for Planned Parenthood’s 2.5 million patients who receive vital services such as cancer screening and pregnancy planning.

And she voiced her opposition to Trump.

“President Trump, I did not vote for you,” Johannson said. In order to gain her support, Johansson said Trump would have to support her, as well as her sister, mother, best friends, men and women who were at the march on Saturday, “anxiously waiting here to see how your next move may drastically affect their lives.”

She said she feared under Trump the country would take a step backward, not forward.

“After the result of this November election, I felt as a woman, as an American citizen, a great weight bearing down on my shoulders — the feeling that the near future would present many obstacles, confrontation and division,” she said. “But once the heaviness began to subside I realized an opportunity presented itself to make real long-term change.”

Filmmaker Michael Moore gave a to-do list to the marchers, telling them to call their congressman or senator — and shouted out a local number — to join a group and retake the Democratic party by getting rid of the old guard and bringing in new blood. He said form “regions of resistance” across the country and run for office.

“OK. We got through Day One,” Moore said of Trump’s Inauguration. “We are in Day Two now of the Trump tragedy.”

I woke up this morning, picked up the Washington Post and the headline read ‘Trump Takes Power.’ I don’t think so,” Moore said. “Here’s the power. Here’s the majority of America right here. We are the majority. The new president vows to end American carnage. Mr. Trump, we are here to vow to end the Trump carnage.”

Making their way through the crowd at the rally was Mamie and Grace Gummer, Meryl Streep’s eldest two daughters. Almost two weeks after their mother made headlines for addressing Donald Trump in her Golden Globes speech, Mamie and Grace were in D.C. dressed in workout clothes, present because of “um, everything,” Grace said, before jumping up on a post to get an aerial photo.

The lead-up to the march indicated it would be the largest organized protest in some 50 years. Michal Lavask, who had traveled from Alabama with her “longtime friend” Lydia Louis, in from Virginia, said she hasn’t attended a march “since the Sixties,” but the Women’s March on Washington was a special occasion. After taking a moment to pass the tears that welled in her eyes, she explained she made the trip from the South “because I was heartbroken over what I saw happen to this country and the direction that it was going. And it was important that I do something positive, and not just wallow in my own sadness. And I wanted to take a step and start really doing something. I see this as a kickstart to going back and getting really engaged again, which I haven’t done in a while.”

“I went through a really deep grieving process, because it feels like there’s been a major death in my life,” Louis added. “It just feels so hopeful to be together with others. Seeing that I’m not alone and that we’re going to stand together to push back — it’s just this feeling of having stepped to an altered universe, and I’d just like to get back.”

“As an immigrant, a new American citizen, a mother of two daughters and a son, and as a woman, I marched today for all of us as a nation,” Rebecca Taylor said in an e-mail following the march. “Today was an amazing experience! It was very unifying and wonderful to see how this movement has so many different faces; young, old, black, white, male, female and together we are peaceful and we are strong.”

Several women marched with their young children, including Kelly, who, when asked why she felt it important to bring her daughter, turned to her child and asked her “Why are we marching — for who, for what?”

“Because we want to learn how to be kinder,” her seven-year-old, Gabby, replied, from her mother’s arms. “To all other people.”

Celebrities Heading to the Women’s March on Washington >>

S.W. Basics Stands Up for Women’s March on Washington >>