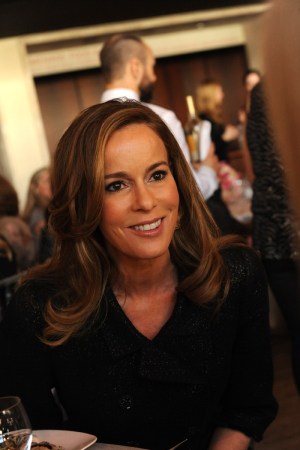 Tuesday afternoon found the David H. Koch Theater at Lincoln Center swarmed a few days early, as well-heeled women turned out in hordes for New York City Ballet’s annual luncheon days before the Fashion Week melee. “Lots of females here…and a few ladies, too,” one attendee smirked near the grand staircase that led to the promenade. She was right on one account: The audience was nine to one in favor of the fairer sex.

The luncheon was preceded by a brief program, which included a welcome from Peter Martins and the presentation of the Janice Levin award to Taylor Stanley, an NYCB Corps de Ballet member. “My parents loved me my whole life and they still love me,” Stanley stammered on stage, clutching his award. “Thank you.”

Jenifer Ringer, a principal dancer with the troupe, interviewed three of her fellow performers (Robert Fairchild, who plays Apollo and Romeo from “Romeo and Juliet,” Sterling Hyltin, who plays Juliet, and Sara Mearns, who played Odette/Odille in “Swan Lake”) on their biggest parts — the name of the program was “Iconic Roles.” Mearns discussed the emotional stress behind starring in Swan Lake, though was quick to explain it was less dramatic than the Darren Aronofsky version. “You don’t turn completely crazy,” Mearns said, “despite what the movies may have you believe.”

Sarah Jessica Parker, a longtime supporter and current board member of the New York City Ballet, was on hand for the festivities, chatting with some of the principal dancers before guests were seated. One was attempting to persuade her to don a tutu. “No way,” Parker laughed. “I’m here for the lunch, remember? No tutu for me today.”

“I was trained as a ballet dancer,” Parker later explained. “I spent a lot of my life dancing…and when Peter Martins asked me to be on the board, I really took the time to think about it, what it meant, what it would involve. I’d been involved ‘unofficially,’ but now that I am committed to it, I’ve tried to take it very seriously and be deserving of the role. I’ve always had a fondness for this particular company because of its relationship with Balanchine,” Parker said. “Today was just so beautiful. I’m always blown away.”

Benefit chairmen Donya Bommer and Darren Henault took to the podium midway through lunch to address revelers like Jill Kargman, Olivia Chantecaille, Nina Griscom and Julia Koch. “We raised $300,000 today,” Bommer said. “But remember, we spend $600,000 a year on pointe shoes. This is an expensive art form.”

Henault added: “This is what it’s all about, though. In the Seventies, we were all about Andy Warhol, but he had bad hair and he mumbled. In the Eighties, it was Damien Hirst — he pickled fish, OK? These dancers are artists. And they have great hair, and they don’t mumble. We need to support our artists.”