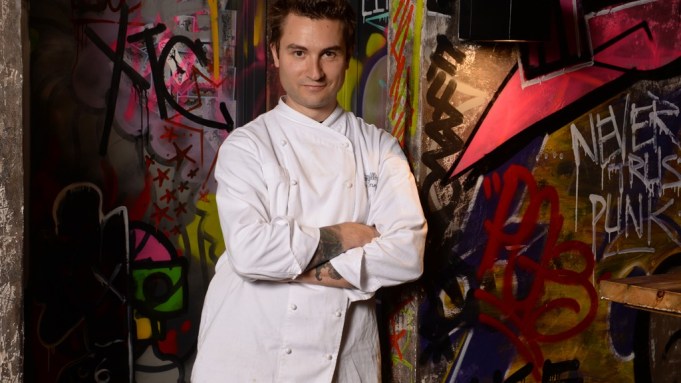 In the last few years, Alex Stupak has carved out a mini empire in the New York dining scene with his Empellón restaurants serving high-end Mexican cooking, Empellón Taqueria in the West Village and Empellón Cocina in the East Village. On Monday, just across from Tompkins Square Park, he’s opening his third iteration under the Empellón umbrella, Al Pastor, but though they all share a name, it’s a left turn from its predecessors.

Stupak is dispensing with reservationists, hosts, servers, extraneous items on the menu and fancy plating — the menu only consists of 14 food choices, which are all served on paper plates. Think of it as the Mexican Momofuku Ssäm Bar.

“It’s less about presentation and more about delivery,” he says. He was in Cocina demonstrating new dishes a week before the spot opened to the public. “We’re not playing the restaurant game. I think we’re in the ‘getting-your-taco-as-fast-as-humanly-possible’ business. You hear people say over and over again, ‘Well, tacos are just better on the street and they aren’t meant to be expensive.’ Maybe it’s not about the street. Maybe it’s about the physical nature of the space.”

His choice of venue drives home the point: in the Eighties, it was a punk dive bar called Alcatraz. Stupak tapped several artist friends to re-create graffiti on the inside to look weathered.

“At the end of the day, I wanted it to feel like a quirky dive bar that someone happened to inject a taqueria into,” he says.

The handsome Stupak, 34, got his start at WD-50, the soon-to-close innovative restaurant from Wylie Dufresne, and opened Taqueria four years ago, following it up with Cocina two years later. The concept for his new eatery came from one of his biannual pilgrimages to Mexico to study the state of the taco in its native home.

“At this point, in four-and-a-half years, I’ve served a metric ton of tacos,” he says. “We said, ‘OK, well if I take tacos seriously, what’s my favorite taco of all time? The answer is Taco al Pastor,” a traditional dish defined by pork cooked on a spit that is derived from Mexico’s Lebanese immigrants. “They’re really delicious. It’s a shining example in terms of its construction of everything that’s great about Mexican cuisine.”

Though the dish gets star billing here, Stupak isn’t worried diners will tire of his al Pastor, which is served in a palm-sized piece, packed with spit-roasted pork and topped with a slice of pineapple. Or, at least, not any more than people tired of the pork-belly buns that catapulted David Chang’s Momofuku to fame.

“You really have to conceptualize something that’s timeless,” he says. “I don’t think anyone could ever get sick of eating spit-roasted pork on a freshly made tortilla with some really great salsa for four bucks.”

Preparation:
Top with Sparkling Wine
Build all ingredients in a Highball Glass
Garnish with and Orange Peel