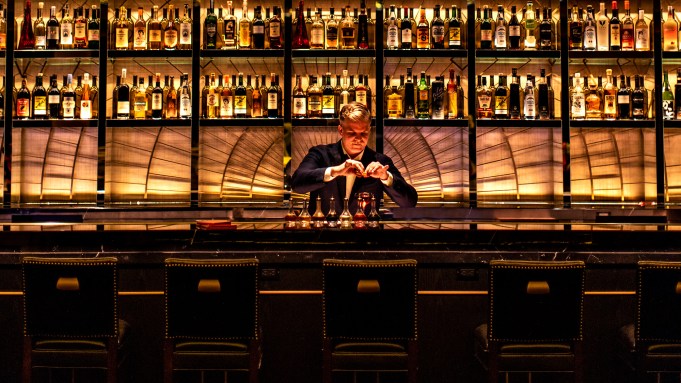 The NoMad has landed in Las Vegas — specifically, on the top four floors of the recently remodeled Park MGM.

It’s the boutique hotel’s third location — a Los Angeles outpost opened earlier this year — and one that taps into the same ethos of its original New York location through a partnership with Sydell Group and MGM Resorts.

“Jim Murren, who is the chairman and ceo of MGM, was a regular guest of ours at NoMad New York, and he kind of fell in love with the NoMad and really wanted us to bring NoMad to Las Vegas,” says Sydell Group’s Andrew Zobler.

“The thing that was really important for me was that the NoMad really be a full-on hotel experience, and so it has its own restaurant, its own bar, its own pool, its own entrance onto the street, its got its own casino; and there’s nothing else in Las Vegas that I can think of where that’s true,” says Zobler. “Even though it’s not really big, I think to have the full one experience of being in Vegas it’s very important to have a casino, because that gives you a real sense of place,” he adds, describing the hotel’s high-stakes casino as “entirely NoMad” in its aesthetic; the room is situated under a historic pentagonal Tiffany glass ceiling.

While naming the Cosmopolitan as a close competitor, Zobler notes that NoMad Las Vegas’ differentiating factor may be in its approach to its definition of a VIP guest.

“Las Vegas has a long history of defining their VIP guests as people who gamble with big stakes. And I think for the NoMad, the way we’ll define our VIPs is who we think is really interesting. And it’s a different approach — it doesn’t mean we won’t cater to people who like to game; of course we will, we’re in Vegas — but I think we’ll be much more interested in who’s doing great art, who’s writing interesting things, who’s creative, who’s trying to create a better planet,” he says. “I think that’s a fairly somewhat typical approach in the lifestyle space, but it’s not typical for Vegas,” he adds. “What I do hope is that it’s a home that doesn’t really exist for lots of people who already go to Vegas and don’t feel like they have a place that calls to them.”

The concept certainly appealed to acclaimed restaurateurs Will Guidara and Daniel Humm, who are continuing their run of the eponymous NoMad restaurant and bar by overseeing the food and beverage program at the new hotel. (The pair are also behind New York’s Eleven Madison Park, which clocked in at number four on S. Pellegrino’s 2018 World’s Best Restaurants List.)

“We’ve gotten offers to do something in Las Vegas so many times over the last 10 years, and its never felt right,” says Guidara. “And I think a big part of that is because the idea of having a restaurant in one of these giant buildings where you have to walk so far to get to the restaurant — the environment when you walk out of the doors is such a harsh contrast to whatever we would have created inside the restaurant. It’s one of those things where even some of the greatest restaurants here, no matter how big the bubble is that’s built around you over the course of the experience, no matter how beautiful the meal is, when you walk out, you’re in a floor filled with slot machines.”

“But because of NoMad, because it’s not just a restaurant but it’s the hotel, the gaming floor, the pool and all of that, the idea that you could get dropped off outside and walk right into our environment and we could really control that environment for the entirety of your experience…just felt like a really unique opportunity to do something special here,” Guidara continues. “One of the things that we’ve always been into is bringing a bit of theatricality to the dining experience,” he adds “At the end of the day the only thing we really really care about is the food is delicious and the service is gracious, but it’s fun for us that we can add really unique elements to the meal.”

They are bringing several of their signature dishes, such as the roast chicken — which will also be translated into a chicken and black truffle French dip — as well as tweaked versions of standard Las Vegas fare, including an 80-day aged steak and a lobster pot pie. While the bar will open with the hotel’s soft opening this weekend, the restaurant is set to open next month.

And why not throw Lady Gaga into the mix? Starting Dec. 28, the singer will be in residence at the Park Theater, adjacent to the NoMad.

“Before this started, I wasn’t necessarily the person who would pick up and go to Vegas, but since I started the project I’ve learned a lot more,” says Zobler. “If someone said to me ‘do you want to go see Lady Gaga’s show for a weekend?” I’d be like, ‘in a heartbeat.’ And this is the place where I’d want to stay at.”