From new boutiques to fresh eats, visitors to Paris during couture week have plenty of extracurricular pursuits calling between shows. 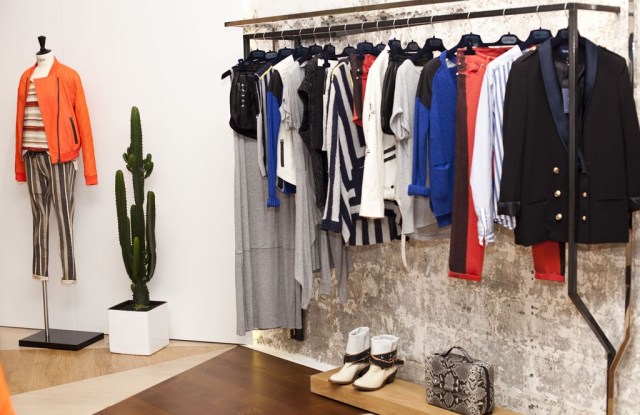 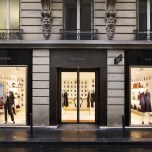 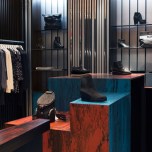 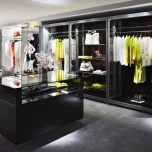 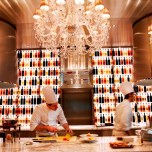 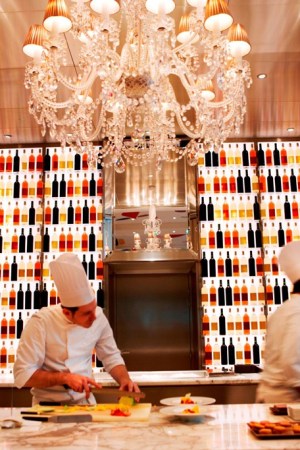 Inside the kitchen of La Cuisine.

7 TV Shows to Watch This December

From new boutiques to fresh eats, visitors to Paris during couture week have plenty of extracurricular pursuits calling between shows.

A slew of new stores awaits visitors to Paris this season. On the Right Bank, Tom Ford has opened his second boutique, on Rue Saint-Honoré at the corner of Rue Cambon. Unlike his first store, which was dedicated to men’s wear, the 5,800-square-foot emporium sells men’s and women’s ready-to-wear in addition to accessories, jewelry, eyewear, fragrances and made-to-measure pieces.

French contemporary brand April, May, known for its rock-chick-meets-Parisienne aesthetic, has opened its first store in the Marais. The brainchild of the label’s cofounder and designer, Diane Goldstein, the 800-square-foot space has taken its design cues from the area’s art galleries, with wooden floorboards contrasting with sections of raw concrete wall. Across the river, Rue de Grenelle boasts two boutiques dedicated to women’s wear, a stone’s throw from department store Le Bon Marché. Paul Smith has unveiled its fifth shop in the French capital, with distinctive features including walls lined with photographs by Irving Penn and Henry II antique furniture. A few steps down lies Surface to Air’s second Paris boutique. Like its previous stores in Paris, New York and São Paulo, it is designed by architect Federico Masotto, who has decked out display units with opulent red and blue marble.

The Royal Monceau-Raffles Paris hotel is expanding its culinary roster with guest chefs from all horizons. Through next month, celebrity chef Nobu Matsuhisa joins house chef Laurent André in the kitchens of La Cuisine for a dinner-only appearance featuring Nobu signatures such as tuna sashimi salad and blackened cod as well as South American-inspired dishes, such as Chilean bass with jalapeno sauce. In addition to an à la carte menu, there is a seven-course Omakase, or chef’s choice tasting menu (for 150 euros, or $199 at current exchange). Then on Feb. 12, guest chef Renato Piccolotto of the Hotel Cipriani in Venice will join chef Roberto Rispoli at the Royal Monceau-Raffles’ Italian restaurant Il Carpaccio for a four-day stint, featuring his signature risotto and taglierini. The chefs have also designed a collaborative tasting menu (for 135 euros, or $179). “We try to make it surprising for guests every time,” commented Omer Acar, general manager of the hotel. “Cultivating a dialogue between chefs is key to the creative process.”

Parisian foodies are getting a soft spot for la pascade, a rustic dish from France’s Aveyron region. It’s gaining popularity again after chef Alexandre Bordas opened an inn-style restaurant on Rue Daunou (between the opera and Place Vendôme) dedicated to that specialty of his native area.

The thick, yellow-to-brown crêpe, with a crisp and fluffy texture, is a vector for the chef’s creations, which also take inspiration from the dishes served in his two Michelin-starred restaurant in Honfleur, France, called SaQuaNa.

Like a nest, the pascade holds seafood such as cod with spinach, coriander and a coco emulsion.
The restaurant, which seats 44, has walnut tables on which stainless-steel tubes hold the cutlery, napkins and menu.

On offer are five savory and four sweet pascades, with prices ranging from 18 euros to 23 euros, or $24 to $30 at current exchange, for the savory ones and from 9 euros to 18 euros, or $12 to $24, for the sweet versions. Dessert lovers go for the “coffee shot” pascade, with coffee-flavored Italian ice cream, chocolate mousse and hazelnut croquants. The wine list is chosen by sommelier Sébastien Pradal, also an Aveyron native.

NEXT: Death by Chocolate >>

There is more to Ladurée than macarons. Nestled under the archways of Rue de Castiglione, off Place Vendôme, is a boutique dedicated to the pastry shop’s new brand, Les Marquis de Ladurée, which is entirely devoted to chocolate. Under Murano glass chandeliers, the marble counter, dotted with 18th century-style medallion portraits, holds an array of cocoa-flavored delights, from pastry (with recipes exclusive to the store) to pralines and chocolate bonbons. Of course there is the signature macaron, in a variety of chocolate flavors. Coming shortly are chocolate-making classes and tasting sessions in the store.

Atelier Cologne has just opened its first boutique in the City of Light. The 666-square-foot location in central Paris, tucked away just off the Rue Saint-Honoré in a space that used to be two stores — an art gallery and a postcard seller, is its second freestanding shop (after one in New York’s NoLIta neighborhood). Sylvie Ganter, a cofounder of the fragrance brand, explained Atelier Cologne is 100 percent French. “So it was about time we opened in Paris,” she said. As the space was being renovated this fall some original details were uncovered, such as a brick wall, pillars and decorative molding. Wood from Brazil lines the floor and much of the shop’s furniture is reconstituted from antique pieces. “All those things have so much soul and history that we were glad to bring them back to life in our own world with a different type of use,” added Ganter. On site along with the full range of Atelier Cologne products is an engraving atelier, where customers’ names or initials can be put on the scents’ leather caps and travel pouches. Most recently, Atelier Cologne opened in Harvey Nichols in Kuwait, and up next could be a presence in Dubai and Shanghai, according to Ganter.

Paris hotel Le Meurice recently renovated its spa with the help of designer Charles Jouffre. The bright space, which measures about 3,780 square feet, boasts three treatment rooms (one of which can accommodate two people simultaneously), a couple of rest lounges, space for manicures and makeup sessions, an area for pedicures, hammams, a sauna, fitness room (available to hotel guests and visitors with a monthly pass) and terrace. A fountain made of ice is a striking visual detail in the spa tinged in bronze, green and beige hues. Brands used here include Valmont, By Terry and OPI. Since its revamp, some offers have been added to the spa’s menu, including the Bulle Émotionnelle Treatment, a facial with a focus on the eye area that lasts for one hour and costs 150 euros, or $199.60 at current exchange. There’s also a new body-slimming treatment. Other possibilities for some rest and relaxation include the hour-long Hydration Ritual, which is 140 euros, or $186.30; the half-hour Leg Toning Treatment for 90 euros, or $119.75, and the hour-long Relaxing Massage with Essential Oils for 150 euros, or $199.60. With easy access from the spa or from 8 Rue de Castiglione is a 277-square-foot Valmont boutique.

Les Arts Décoratifs in Paris is hosting “Fashioning Fashion,” an exhibition tracing two centuries of fashion in Europe from the 18th century to the early 20th century. It showcases a major collection of European men’s, women’s and children’s garments and accessories, which was acquired in 2009 by the Los Angeles County Museum of Art (where the exhibit originated).

Curated by the Arts Décoratifs’ Véronique Belloir and Denis Bruna, the show takes a chronological approach, examining evolutions in tailoring techniques, technical development and fashion trends from the Age of Enlightenment to World War I.

The first floor is dedicated to the 18th century, while on the upper level visitors can gaze at 19th-century fashion, including luxurious dresses in plain weave silk and pantaloons in silk cut velvet.

There’s a section on the bustle, which replaced crinolines in around 1870, for instance. The bustle came in different shapes, supporting a sort of cushion called a “pouf,” which assumed the shape of a crayfish tail. But fashion changed fast, and in 1880 the bustle disappeared and was replaced by elongated silhouettes.
Also at Les Arts Décoratifs, in its nave, is the “Van Cleef & Arpels: The Art of High Jewelry” exhibit.

The “Michael Werner Collection” is a tribute to the second-largest donor ever to Paris’ Museum of Modern Art. Consisting of some 900 pieces set in atypical juxtapositions, the show reunites the works of 40 artists, ranging from postwar painters such as Sigmar Polke to more conceptual artists like Joseph Beuys.

The museum also showcases “Art At War, France 1938-1947, from Picasso to Dubuffet,” an exhibit that highlights more than 100 artists’ works on loan from around the world. The oeuvres reflect and help define how artistic creation carried on despite the war but how art was forever changed by it. Fast forward to today and its urban codes. Les Arts Décoratifs explores the ways graphic designers and DJs interacted to create record sleeves, flyers and videos in the Nineties in its show called “French Touch. Graphisme/Video/Electro.”

Another reaction to post-Modernism is on display at the Musée de la Poste, which is hosting “Beyond Street Art,” which brings indoors the graffiti and stencil creations of 11 artists from four nations.

Two modern art masters are the subject of Paris shows. An exhibit at the Centre Pompidou focused on Salvador Dalí is organized both chronologically and thematically, featuring pieces in different media. It finishes in a labyrinth-shaped room evocative of the artist’s brain.

The Pinacothèque presents “Van Gogh, Dreaming of Japan,” the first exhibit in decades devoted exclusively to the artist. The paintings on display — mostly landscapes — provide a rare opportunity to examine the Japanese influence on his treatment of works focused on his beloved South of France. An exhibition featuring Hiroshige is being held simultaneously in the museum’s second building. Though long overlooked in France, this master of ukiyo-e, or Japanese woodblock prints, was an obsession of Van Gogh.

The Grand Palais has extended its retrospective on Edward Hopper after it attracted more than a half-a-million visitors already. Here, the American painter’s career is investigated, from his formative years, which included a few trips to Paris, to the establishment of his emblematic realistic style. An entire room focuses on Hopper’s etchings.

Photography’s in focus at the Bourdelle museum, which has put on a show called “Dans l’atelier du photographe.” This charts the medium’s history since its founding in the middle of the 19th century and examines its basic techniques. The exhibit is divided into 14 sections, each devoted to a particular photographic process.

For those feeling blue from gray January days, the Fondation Cartier’s exhibit can bring on a smile. Exclusive to Europe is the retrospective of Chinese artist Yue Minjun, which documents cynic realism through the artist’s paintings of ecstatically laughing figures and ironic parodies of classic masters’ works. Also on display are about 100 of his drawings that have never before been shown publicly.

Something fishy is going on at the Gagosian Gallery. As an ode to his leitmotiv, Frank Gehry created a spectacular collection of lamps, varying in scale, all in fish form. The Canadian-American architect transformed a simple accident into an artistic creation: While working on another project, he shattered a piece of plastic laminate and gleaned inspiration from the shards, which reminded him of scales.