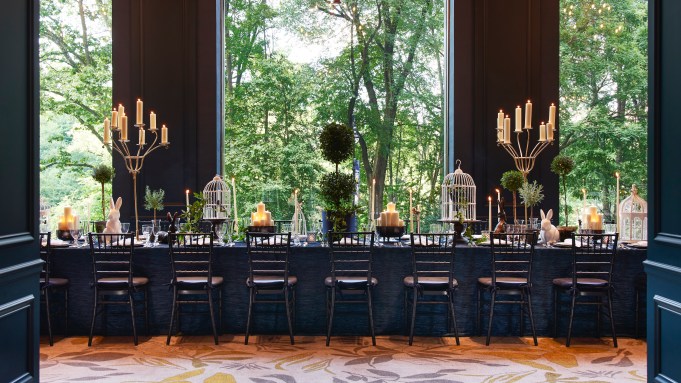 If you’ve walked along Central Park South but never heard of the Park Lane hotel, you’re in good company. But soon, thanks to an extensive facelift, the storied hotel’s owners hope that the name is as recognizable as those of its neighbors the Plaza and the Ritz, both only a block away.

“We didn’t come up with the tagline ‘something intriguing is happening’ for nothing,” says Park Lane managing director Prince Sanders. “We want people to start to wonder what has happened to this almost forgotten property.”

Originally developed in the ’60s by billionaire developer Harry Helmsley, the hotel was purchased by in 2013 by a swath of partners who planned to build a luxury tower in its place. After a scandal involving a foreign investment fund connected to fugitive financier Jho Low, and an outside bid to landmark the building, the skyscraper plan was abandoned in favor of a complete hotel redesign. The renovated hotel, which was developed by Witkoff and operate by Highgate, recently soft reopened, and will officially debut on Nov. 18.

The Park Lane is ready to welcome a whole new audience to its property. Although targeting the luxury traveler, the hotel is billing itself as an accessible alternative to traditional hotels on 59th Street like the Fairmont-managed Plaza and the Ritz-Carlton.

“It was very clear for all parties involved in this project that we would not find success if we put another traditional hotel on the park,” says Sanders. The team landed on the idea of creating a lifestyle hotel rooted in inclusivity, despite its proximity to “Billionaires’ Row.” “That concept started with creating an  environment where everyone felt welcomed. If you ever felt that when you walked in the door of one of the traditional hotels that you weren’t quite fancy enough, or maybe didn’t have enough money or know the right people, or felt intimidated in any way, this is a place where you could come in and feel welcomed.” (Billionaires, of course, are also welcome.)

The team enlisted design firm Yabu Pushelberg to reimagine the hotel’s 610 guest rooms and interiors. The rooms and suites feature custom murals by En Viu, inspired by Central Park, which is visible from oversize windows throughout the building.

For food and beverage, the hotel enlisted Scott Sartiano, the restaurateur behind downtown hotspots like 1 Oak, Up & Down and members club Zero Bond. With an eye towards the nightlife scene he’d created downtown, the hotel looked to create a similar atmosphere uptown. “If you’re going to create a property that’s unique and different in look, feel, and style, then you have to go with a food and beverage partner that can match that feeling,” says Sanders. “We knew he was the perfect match to bring some of that downtown to the Central Park area.

The hotel’s dining options include Harry’s New York Bar on the ground level and Rose Lane on the second floor, which also offers impressive spaces to host private events. The most dramatic space is the hotel’s rooftop cocktail bar located on the 47th floor, which opens to the public in November.

“When I first toured this property, I was mesmerized by the view,” says Sander of the rooftop, which until now was attached to a private residence since 1971. Sweeping views include the George Washington Bridge and rivers on both sides of Manhattan. “When we say that we are welcoming you into something new, we truly are for the first time ever inviting the public to come experience this view and this space like it’s never been seen before.”

Where to Eat in New York This Fall

From Fashion to Winemaking, the Italian Way