The Scene at London Fashion Week

In town for the shows? Here are some hot spots to check out. 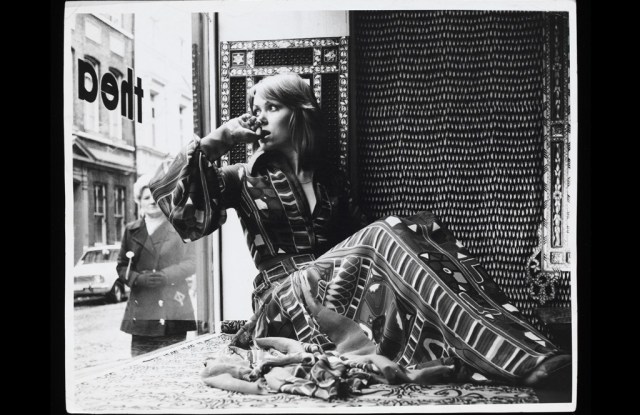 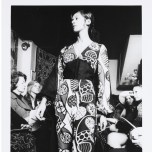 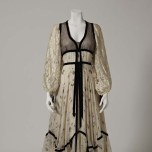 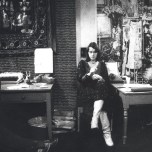 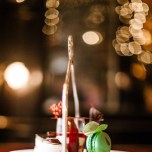 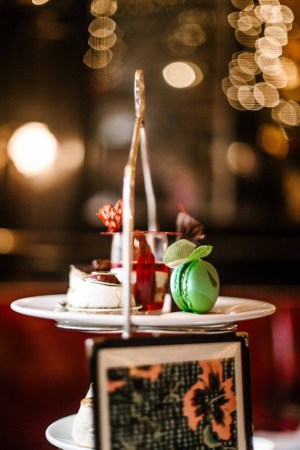 DESIGNS ON THE SEVENTIES

While Thea Porter might not be as much of a marquee name as her fellow Seventies designers Bill Gibb, Ossie Clark and Zandra Rhodes, the curators at London’s Fashion and Textile Museum are determined to cast a new light on Porter’s rich, bohemian designs.

The exhibition spotlights Jerusalem-born Porter’s eye for intense color and intricate detail, with designs like a silk Empire-line dress in a print depicting the Buddha, one high-necked design in a lilac peacock print, and black lace dresses embellished with delicate gold sequins, which she sold in a short-lived Paris store.

Porter’s London store eventually closed in 1981, with the museum noting that she didn’t capitalize on “the large orders, the magazine covers and the high-profile clients.”

And the museum’s curator, Dennis Nothdruft, who organized the show with guest curator Laura McLaws Helms and adviser Venetia Porter (Thea’s daughter), noted that as Porter’s designs weren’t “ever really mass-produced,” there’s a “rarity” to her work.

Toward the end of the show are designs by Matthew Williamson and Anna Sui, which the designers have said were inspired by Porter’s work.

“She’s collected by a lot of fashion designers, who look to her work as a perfect evocation of bohemian style,” Helms said. In addition, her work has a celebrity following, with Nothdruft noting that “it’s really quite cutthroat” when Porter’s designs come up at auction.

“There is this market of people in the know who are huge fans of hers,” said Helms, adding that Kate Moss wore a turquoise Thea Porter dress for the dinner the night before her wedding, while “the Olsen twins, Nicole Richie and Julia Roberts,” also collect her designs.

​And while Nothdruft acknowledged there’s a Seventies moment “in the air,” in designers’ spring collections, he said he and Helms had been planning the show for two years.

“It was one of those [exhibitions] that needed to be done,” Nothdruft said. “I think Thea Porter had a really sophisticated eye.”

Helms also pointed to Porter commissioning textile designers — among them a young Katharine Hamnett and Sandra Munro — to create unique fabrics for her designs. “She was a woman who was really engaged with the world and engaged with other people,” Helms said. “And I think that comes through in her clothes, it was really this collaborative effort.”

The exhibition runs through May 3.

NEXT: The Matthew Williamson Afternoon Tea >>

The city is going crazy for fashion teas, with Matthew Williamson, the Design Museum and The Campaign for Wool joining the party. Williamson has teamed with the pastry chefs at Balthazar London on a bespoke offer that’s inspired by his spring collection.

For those who need to wash their finger sandwiches down with something a little stronger, there’s always Williamson’s Chasing Rainbows cocktail, made with Pinky vodka, Lillet Blanc, yellow Chartreuse, crystallized rose petals and Brut Champagne.

W London and the Design Museum have teamed up on a W Fashion Power Tea with a menu named for the Women Fashion Power exhibition at the museum. The menu, created by the pastry chef Rachel Newman, offers a Lady Gaga-inspired marzipan marble cake; a savarin string-of-pearl cake meant to channel Coco Chanel; and a Vivienne Westwood candy floss treat with tartan print chocolate wrap. Food is presented on a tea stand in the shape of shoes.

The Campaign for Wool and the Chinese foodie paradise Yauatcha, have collaborated on a special “Year of the Sheep” menu — and decor — to celebrate Chinese New Year, which falls on Feb. 19. The special menu includes a caramelized sheep’s milk macaroon filled with dulce de leche, and a Chinese dessert made of sheep’s milk yogurt bavarois with lemon curd and lemon sable on a bed of lemon sponge and pandan buttercream.

The Michelin-starred teahouse and Campaign for Wool have also created a one-off Year of the Sheep window display and given the establishment a woolen makeover with custom tailored upholstery. Yauatcha will also act as a pop-up gallery, with sheep prints hanging on the walls of its Soho restaurant.

Barber & Parlour on Redchurch Street in East London combines two of life’s greatest pleasures: socializing and beauty treatments. The three-floor space is an offshoot of Shoreditch House and is open to nonmembers. It houses Cheeky Parlour, a beauty lounge that offers manicures and pedicures; Cheeky Hair, a salon run by the celebrity colorist Josh Wood that specializes in affordable cuts and color, and Neville Barber, for men’s haircuts, shaves and treatments. Between appointments, clients can unwind at the restaurant and cold-pressed juice bar, or catch a film in the basement cinema, which has been outfitted with plush velvet armchairs and cashmere blankets.

NEXT: The Ivy Market Grill >>

With the Ivy restaurant under renovation until May, regulars can get their fix at the Ivy Market Grill, a new, all-day café and restaurant. Chef Sean Burbidge offers a diverse range of classic comfort food: The early-morning offer includes avocado, tomato and sesame truffled eggs; buttermilk pancakes, and the Market Grill vegetarian breakfast. For lunch and dinner, choices include crispy duck salad, lobster cocktail, rack of lamb and whole lemon sole.

It opened in 2013, and Chiltern Firehouse, the former Marylebone fire station that’s been transformed into a hotel by America’s host-with-the-most André Balazs, is already a London legend. There are the monthlong waiting lists, the mysterious Ladder Shed bar that is officially reserved for hotel guests and the hotel’s loyal celebrity following — Naomi Campbell is said to have her own reservation hotline — as well as the clubby feel and a decor that evokes the Seventies in a “Three’s Company” sort of way, with the wicker chairs and macramé-clad hanging plants.

Securing a dinner reservation is something of an ordeal, as one and all are eager to try out Portuguese chef Nuno Mendes’ American menu — or just be seen eating there. That said, most anyone can get a taste of Chiltern by going for a drink at the restaurant bar. Walk in and ask one of the Emilia Wickstead-clad waitresses for the popular “Cinq à Sept” cocktail, a vodka, Chambord and pomegranate mix, and don’t forget to pay a visit to the now-famous smoking terrace, sneakily located through the mirrored doors of the bathrooms.

Guy Bourdin, a virtuoso who shunned the spotlight, an aesthete who embraced the grotesque, a fashion photographer who believed that product was always secondary to the image.

The show comes more than a decade after the Victoria and Albert Museum exhibited 34 prints by the maverick snapper and protégé of May Ray, who died in 1991. On display for the first time are photographs of Bourdin’s “Walking Legs,” a series of images for Charles Jourdan — created long before Photoshop — showing elegant disembodied legs strolling along various streets, train platforms, hotel rooms and gardens across Britain.

It also features Bourdin’s grainy, Super-8 films of models during shoots; his work-in-progress paintings that reveal an obsession with geometry and balance, and the myriad images he shot for French Vogue and Jourdan, two of his great champions.

“His photos have a timeless quality and modernity,” said Alistair O’Neill, who cocurated the show with Shelly Verthime. “His work is a notable part of visual culture — he wasn’t just a fashion photographer.”

The Saatchi Gallery’s current exhibition, “Post Pop: East Meets West,” explores how the Pop Art movement has held as much appeal for artists from countries such as China, the former Soviet Union and Taiwan as it did for creatives from the U.K. and the U.S., despite those regions’ “sometimes opposing ideologies,” the gallery said.

Cocurators Andrey Erofeev, Marco Livingstone and Tsong-Zung Chang delve into how artists in the former Soviet Union have employed Pop Art’s motifs to explore issues such as state control, conformity and ceremony in their work. In China, artists drew attention to the region’s “social dislocation,” and in the U.K. and the U.S,. Pop Art served as “a critique of commodity fetishism.”

The show spotlights 250 works by 110 artists from the U.S., U.K., China, Taiwan and the former Soviet Union, curated in themes that span advertising and consumerism to celebrity, mass media and religion.

Among the artists with works on show are Gary Hume, Gavin Turk, Julian Opie, Jean-Michel Basquiat, Richard Prince, Cindy Sherman and Jeff Koons from the West, along with works by Ai Weiwei, He An and Zeng Fanzhi from the East. The exhibition runs through March 3.

NEXT: Peru Comes to London >>

Coya, a Peruvian restaurant in London’s Mayfair, has recently revamped its Pisco Bar, which spotlights drinks crafted from pisco, a brandy that hails from Peru and Chile. The new menu includes Julep Peruano, a drink that mixes pisco, cherry liqueur, mint, whiskey, rosemary and ginger, and Mamariñha, which blends pisco with passion fruit, strawberry and lime. There are also cocktails made from barrel-aged pisco that are limited to one per person, thanks to the spirit’s super strength.

And for those who wish to replicate the drinks at home, the bar offers master classes in making its signature cocktails, against the backdrop of works by South American artists that decorate the low-lit, jewel-toned space.

There’s still time to catch “Women Fashion Power,” an exhibition that opened Oct. 29 at London’s Design Museum and looks at how women “have used fashion to define and enhance their position in the world,” according to the museum. Designed by Zaha Hadid and cocurated by journalist Colin McDowell and Donna Loveday, head of curatorialat the Design Museum, the exhibition showcases garments ranging from 19th-century corsets to Yves Saint Laurent’s Le Smoking suit to former British prime minister Margaret Thatcher’s blue Mansfield skirt suit.

“It’s about clothes and how women have used them to empower themselves, to intimidate people and just to make them feel sexy,” McDowell said. “It’s about how all intelligent women take what they need from fashion at any one particular moment and get their look. The most interesting and successful people wearing clothes today are people who have made their own look from what they are offered.”

The show, which runs through April 26, looks at clothes through the prism of what 25 powerful women wear, among them Joan Burstein, founder of Browns in London; designer Roksanda Ilincic; Anne Hidalgo, the mayor of Paris; musician Skin, and Shami Chakrabarti, director of British human rights organization Liberty.

The connection? Among his major works in London, Pennethorne designed one of the wings of Somerset House.

The café’s menu takes its cues from the different destinations on Pennethorne’s itinerary, with French, Italian and Spanish influences all in the mix, which head chef Richard Robinson has given a modern English twist. Among the dishes are open sandwiches of mozzarella, black olive and baby spinach on focaccia, and roast beef, blue cheese and grilled red onions on rye, with an evening menu that counts Iberico ham and mortadella among the sharing dishes.

Breakfast is also a highlight, with everything from doughnuts and banana bread to porridge and Bircher muesli.

Having cereal for breakfast has gone from mundane to trendy, thanks to Cereal Killer Café, the latest addition to Shoreditch’s raft of hip hangouts. Brothers Alan and Gary Keery’s concept of serving scores of different cereals has been a hit with locals, who often line up around the block to score a table in the bijou café.

Once inside, diners can choose from more than 120 different cereals — including hard-to-find brands from the U.S. and South Korea — along with 30 types of milk and 20 toppings. Eighties and Nineties memorabilia scattered about the café adds to the kitschy feel.