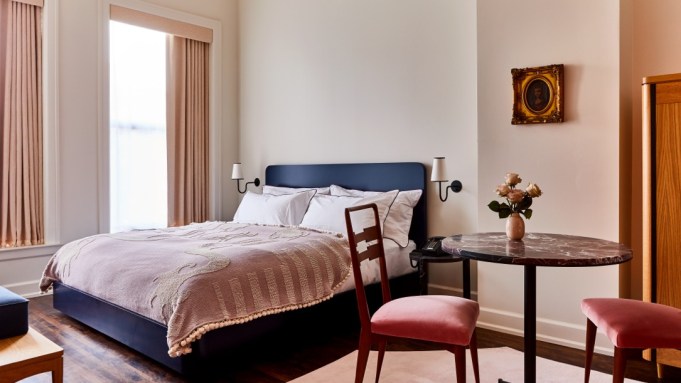 Will Detroit continue its trajectory toward more flush times? Developers are certainly betting on the city’s ongoing revitalization.

The Siren is the newest boutique hotel joining the city’s burgeoning downtown scene, and the second hotel venture of Brooklyn design firm ASH NYC, which opened The Dean in Providence, R.I. in 2014. While visiting Detroit several years ago, founding partner and chief executive officer Ari Heckman walked by a for-sale sign on a narrow 14-story building, the landmarked Wurlitzer Building. Built in the Twenties to house a musical instrument company, the building had been vacant and deteriorating since the Eighties. When Heckman came across the building, it had been shedding bricks for over a decade.

“Everyone in Detroit sort of assumed that the building was not salvageable, so this was sort of the last opportunity to be able to take the building and revitalize it,” says Heckman, who felt drawn to the tower despite its dilapidated state. “I think it was a little bit right place at the right time.”

The hotel’s name references the Greek mythological singing sea creatures, a nod to Detroit’s continuing revitalization. “The idea of calling people back to this city, this tall sort of slender mysterious building,” explains ASH partner and chief creative officer Will Cooper.

The team took cues from the golden age of hotels around the country, and specifically tapped into Detroit’s history of big, iconic hotels during the Forties. ASH also looked to the city’s surroundings — the midcentury design of a nearby Philip Johnson building, for example — and blended traditional and modern influences. A 1926 article from The Detroit Times, detailing the building’s architectural detailing, was a starting point.

“We wanted to capture a little of that vibe and magic, and be a place that’s a little bit mysterious, a little bit romantic — something that doesn’t feel like it was just newly opened, but had lived in the city for a long time,” Cooper explains. “There’s definitely a narrative of new versus old, and…we’re doing the development hopefully in the right way and being sensitive to that and celebrating the people that were there and have been there, or are from there. We’re highlighting and celebrating those people.”

The building’s narrowness worked well for The Siren’s concept, which incorporates a wide variety of room types; Heckman describes the hotel as “democratic.”

“Because there are small bunk bed rooms up to penthouse suites with dining rooms in them,” he explains. “The idea is to make the place accessible to a wide range of people. We’re sensitive to what we’re labeled, a luxury hotel, because there’s certainly luxurious, romantic, well thought-out elements to the hotel and it is beautiful, but it’s also not meant to be just an exclusive space.”

The hotel is well-positioned to cater to both corporate clients and leisure-seeking guests: It is located in the heart of Detroit’s growing entertainment district, nearby sports and music venues such as Comerica Park and Ford Field. In addition to rooms, the team carved out spaces to house and support small local businesses, including a tasting counter run by chef Garrett Lipar, a cocktail bar and café, as well as barber shop and flower shop.

“From a media perspective, Detroit over the past five years sort of went from this foreboding, object lesson place to being the hot new cool city, and written about in the New York Times every other day. It’s been pretty interesting to watch that from the ground,” says Heckman, who notes that ASH is already working on its third hotel, opening in New Orleans later this year. “It happened very fast, and with this narrative of the last 40 years, Detroit being this sort of abandoned place where you go to see ruin porn. Sort of flipping that narrative on its head and being like, well, actually, this is the story of the rebirth and rediscovery of this great American city.”