The party hotel brand is quadrupling in size and heading to various corners of the globe to open new properties.

HONG KONG — It’s been a grueling two weeks for Amar Lalvani. The chief executive officer of the The Standard Hotels started his trip from New York, flitting to Dubai then the Maldives, Bangkok, Singapore, and now Hong Kong, where he sits down for this interview during Art Basel. The day after, he’ll be heading to London, but not before he hosts a dinner with a flashy guest list at Potato Head that includes artist Rirkrit Tiravanija, ‘starchitect’ Ole Scheeren, gallery director Hans Ulrich Obrist, fashion influencer Tina Leung, and socialite Eugenie Niarchos.

At first it might seem odd that The Standard is throwing a dinner in Hong Kong, where it has neither a property nor necessarily much brand recognition. But this visit to Hong Kong is a scouting one, too, and it’s not just here that the company is looking.

The hotel brand is in aggressive expansion mode with designs to quadruple its footprint to 20 properties. This year marks the first time it will venture outside the U.S. when it debuts in London in June. The Maldives will be the next to open, notable for being the hotel brand’s first resort property. There will be “significant changes” as well to the older properties, including downtown Los Angeles and Miami.

Armed with the backing of Sansiri, the Thai property developer that in 2017 bought into the company and is The Standard’s biggest shareholder, Lalvani explained their strategy — including how to translate the group’s extremely social hotel experience across the globe, how the hotelier has continually picked neighborhoods before they turn cool, and also how the company plans to make rooms with no windows work.

WWD: What do you have lined up in the hotel openings pipeline?

Amar Lalvani: We have five existing Standards, and we have announced 15 new projects in about five years. It’s fast. I would say two-thirds are international outside the U.S., and three-quarters of those are in Asia.

We have four projects in Thailand: Bangkok, Phuket, Hua Hin and Pattaya. We have a great base and a team there and then Singapore. We don’t have anything confirmed in Singapore but I think Singapore is ready for something more fun, really ready.

Hong Kong is a huge priority for us. It’s a hub of activity. It’s a showcase for the world. To me, Hong Kong is amazing — culturally, culinarily.

WWD: Where have you been looking in Hong Kong?

A.L.: The challenge is building a hotel here given the land costs and the office market is so strong. Most developers build offices, not hotels. We’re looking at something in Central and Kowloon. We’re trying to figure out the dynamics. [In Kowloon, the site is] not right on the water, it’s set back a couple blocks. I think it’s going through an interesting phase. There’s [the openings of] Eaton and obviously, the Rosewood and [the renovation of the] Intercontinental.

We like doing unexpected things like that. Meatpacking [in New York City] was very unexpected for people. We were very, very early in downtown L.A. Kings Cross in London — we started working on that project five years ago. I used to tell people and they would kind of roll their eyes or say, “It’s a trashy area, it’s a train station area.”

But Camden has so much culture, so much history. It has a really interesting history of left-wing socialist government, so many things happened in London. St. Pancras was getting renovated. The Eurostar was moving there. Google was building its headquarters. Central Saint Martins is there. If you had your eye on the history and the future, you could tell.

Kings Cross is the geographic center of London, it’s not east and not west, so you can pull people from everywhere. It’s just never had the heart of the neighborhood. What I want to happen: Five years ago people couldn’t imagine The Standard is going to Kings Cross. Two years from now, they’ll say, “Of course they did. It was obvious.” 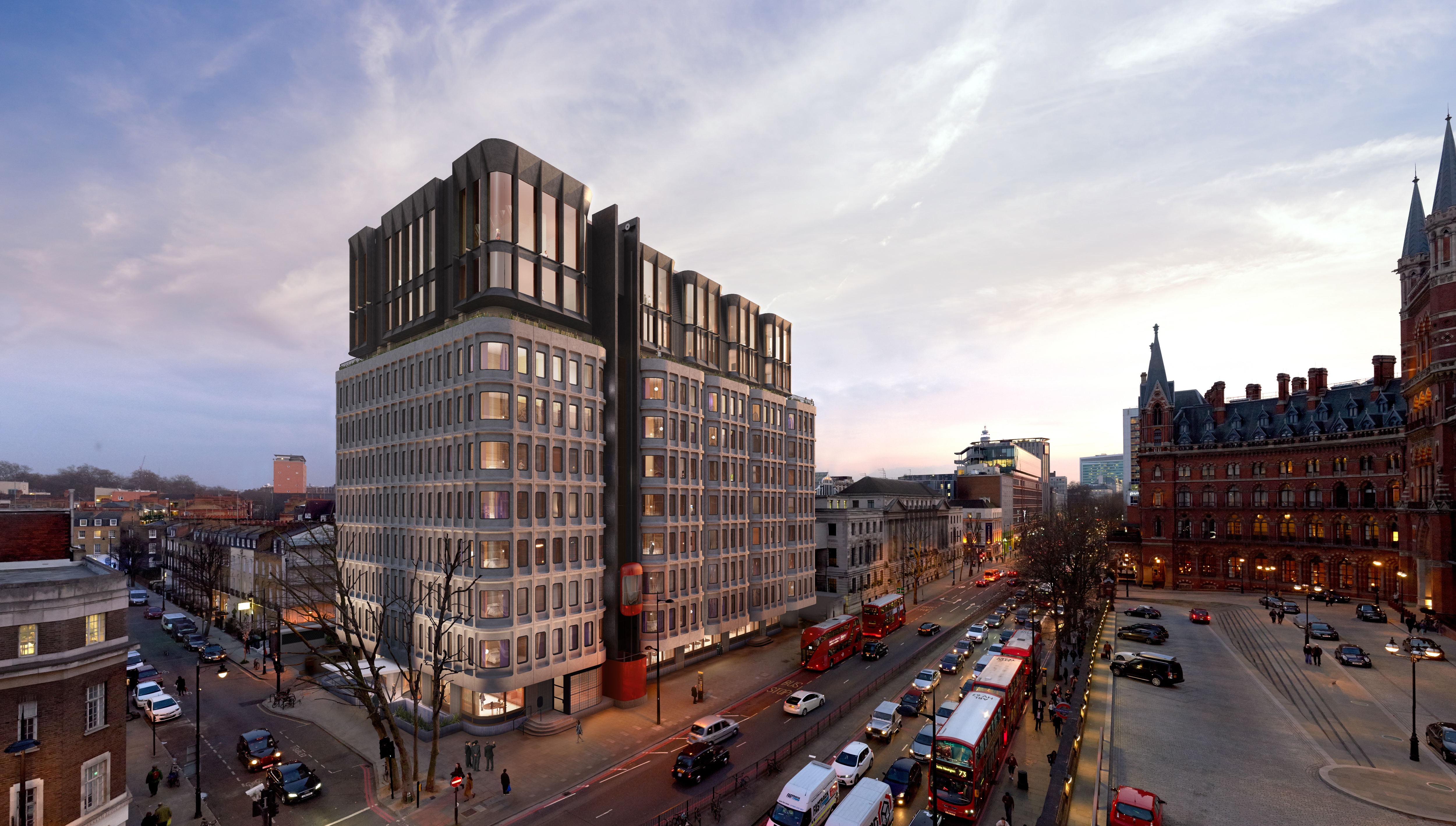 WWD: What more can you tell us about the London location?

A.L.: Everybody else who looked at that building said it should be torn down because it was ugly. We think it’s great. It looks like a Standard already, 1974 Brutalist architecture. It used to be the Camden town hall building.

The funny thing is we look at the most beautiful building, St. Pancras, and their guests have to look at us. But as a guest, whether you like it or not, if you’re having a great experience inside, that’s what matters.

We put rooms inside with no windows. Now, it sounds terrible at first but if you imagine, you work for LVMH. You’re going to Paris that night, you miss your train and you’re going to leave first thing in the morning. All you want to do is have a drink and dinner and go to sleep. You can pay half-price and still stay at The Standard. Or you’re a musician that works at night and need to sleep during the day. Or you can’t afford to stay at a 600-square-foot terrace room.

We’re not prescriptive about being a luxury brand. They’re actually great rooms. It’s a mix of liking Brutalist architecture and creatively using the building. We were able to take the building that nobody could make work, but we made it work.

WWD: Why provide such a mix of high and low to your guests?

A.L.: I just went to the Rosewood [Hong Kong]. It’s beautiful, but if you build all of your rooms that beautiful — 50 or 60 square meters — only a certain clientele can stay there. It will be full of bankers and people with a lot of money, not that there’s anything wrong with that, but you don’t have a mix of people. We like to have a mix of people, we like the young people, the artists, we like the other people, too. You don’t get that mix that makes it more socially interesting.

The Standard does that really well, high and low. We have everything from rooms with no windows to rooms with bathrooms on the outdoor terraces.

WWD: Where else are you going?

A.L.: In Europe, we are working on four key projects: London, Paris, Milan, Lisbon. Paris and Milan are kind of expected. Lisbon is interesting and somewhere I’ve fallen in love with. We have a lot of growth in Asia and are still focused on North America, but less so. We’re doing a new project in Chicago, and another one I’m very excited about in Mexico City.

WWD: Are you fund-raising?

A.L.: We will raise more funds. Sansiri has a good balance sheet but I think I’d like, in the next 12 months, to bring in some more capital.

WWD: Do you feel that hospitality standards are quite globalized, or is there a different way of doing things in Asia?

A.L.: I think the service here is very different. The service tends to be very good but very formal. It tends to be very respectful — to an extreme, probably. The interaction you have with the staff that you have is not personable. It’ll be interesting to translate that to what we do. We hire people for their talent, their personality, and not teaching but allowing people to express their personality. I think it’s something we do that doesn’t happen in Asian hospitality today.

Last time I stayed in Bangkok, I stayed at the Park Hyatt. It’s beautiful. There’s a lovely bar downstairs, a small, whiskey library bar. We were talking to a female bartender, and she was clearly very talented. We were asking her questions, and she was very reserved but she finally opened up. When she did, she told us more about gin than we’d ever heard.

I think that was the first time she’d ever shared that with guests and we had to draw it out of her because she was almost uncomfortable to have that type of conversation. The Standard is the opposite. If someone has that much knowledge, we want it to be shared with our guests because that was one of the better moments of our trip.

WWD: What do you think are the biggest changes facing your industry at the moment?

A.L.: The biggest disruptor is clearly alternative accommodation — Airbnb. I think, for a while, that hotel companies buried their heads in the sand and said it’s different. Yeah, of course it’s different. At a minimum, it’s more supply in the market. That’s something to be cognizant of. Occupancy is still high; that hasn’t really moved. But days when the city is full, hotel rates used to spike up. Now they don’t because [Airbnb absorbs] the overflow.

I’ll tell you where the problem is going to come for the hotel business. Not my generation but maybe your generation or the next generation. Their default is Airbnb. Our default is a hotel but maybe we’ll stay at Airbnb. People in our office, the younger people, maybe they will stay in a hotel but they usually check Airbnb first. When that generation has the spending power, hotels will have a problem.

So what do we do about it? I think we’re in a good situation because we do things that they don’t do. Content, community, spaces, bringing people together, live music, cuisine. You can’t do that at Airbnb, so we become the extreme alternative to an Airbnb. But we’re not naive to think they’re not a competitor.

I worry more for the marginal hotels that aren’t offering anything special.

WWD: Is there a type of traveler that’s not for you?

A.L.: The traveler that is looking for the best deal. There’s a lot of value that we provide but if you don’t see value in the lifestyle, then don’t stay with us. An Expedia customer or a Booking or Agoda customer — we’re going to charge you more for what you’re getting because we believe the experience is valuable.

WWD: It sounds like you want the guest to stay a lot within the hotel. Does that mean you are looking to rely on repeat visitors?

A.L.: The one metric that I focus on the most is repeat guests. It’s about 35 percent [for us right now], which is a lot, but I focus on pushing that. We don’t have a loyalty program with points and stuff. We’re not really big enough to make it valuable. But I think it’s a cheap form of loyalty, it’s like buying you off. You come back because that bartender is the best or the concierge can hook you up or give you the best recommendations.

Related: The Motley, Multidisciplinary Gang at the Standard East Village >>