The Story Behind Lady Gaga’s Most Outrageous VMAs Mask

San Francisco-based mask designer Lance Victor Moore was tapped by Gaga's team to create two pieces, including the much discussed horn mask, for the 2020 VMAs.

Sunday night’s MTV Video Music Awards were an unprecedented take on the live awards show and red-carpet format — and no one dominated like Lady Gaga. Delivering look after look, Gaga was never seen without a mask, driving home messaging around the importance of wearing masks in the fight against the COVID-19 pandemic — in a fashionable way, of course.

Her most talked-about mask sported horns and was paired with a green flowing Christopher John Rogers gown. The man behind the mask is Lance Victor Moore.

Raised on Long Island, Moore has lived in San Francisco for 15 years, where he makes dresses and accessories for “some of the Ladies Who Lunch here in the city,” naming Vanessa Getty as a client. He’s only been a designer for the past four or so years.

“I kind of fell into it. I’ve always sewed and tinkered and things, but I went to school for painting,” he says over the phone Monday morning after a short night’s sleep.

He was contacted by the studio of Gaga’s stylist, Nicola Formichetti, regarding her upcoming VMAs performance, with a special interest because he was a longtime mask-maker, long before the pandemic. 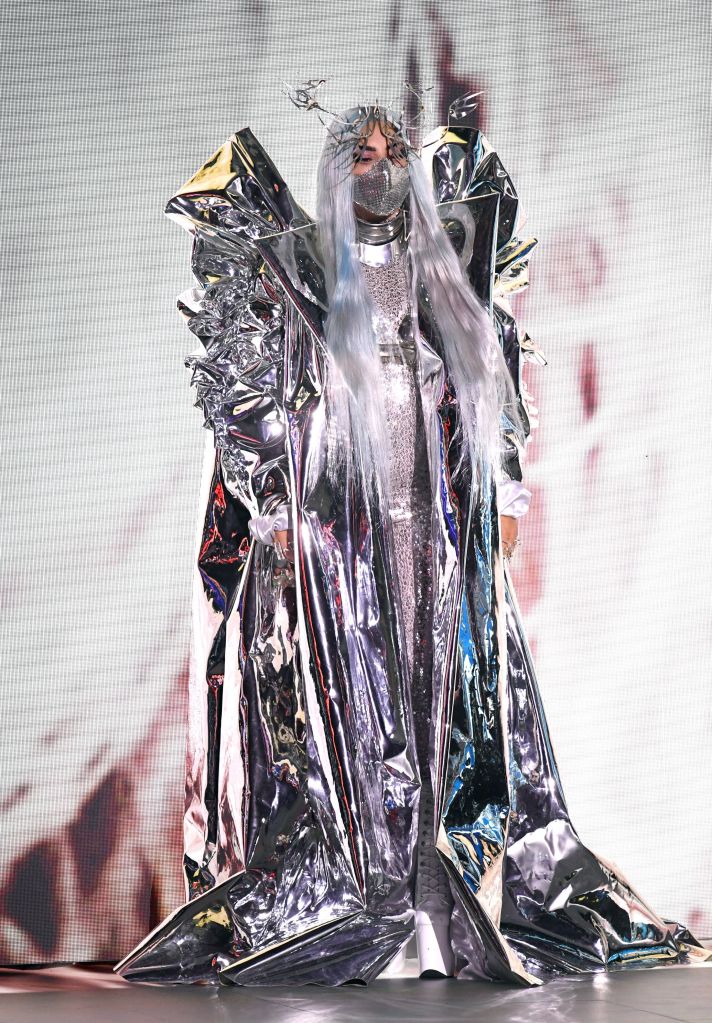 Formichetti’s team wanted to know what he was working on at the moment; they replied with some things they liked and he got to work creating options.

“I’ve never worked so hard in my life. I stayed up for three nights to make sure they had options,” he says.

Gaga ended up wearing two of his creations on Sunday: the horned mask, and a second, which he designed as a facial mask but which Gaga wore as a headpiece, paired with a Candice Cuoco jacket.

“I was shocked by it — I was told, ‘hey you should watch the VMAs, something might show up,’” Moore says. “The first mask that came up I was blown away, and then with the second one I almost fell over.”

Moore has seen a huge boom in sales during the coronavirus pandemic; as someone who already was in the mask-making business, he was uniquely set up to launch into fashion-forward COVID-19 masks.

“When COVID-19 hit I was like, ‘well, I have all these patterns and I’ve been making this style of mask for years now because it’s a base that I would use to build things on,’” he says. “So I just retrofitted my own designs that I’d already done and fitted it with a lining with cotton in it and a secondary pocket to add a filter. I don’t have one left, they were each a one-of-a-kind and all sold.”

The horned mask idea came to him once he acquired the horns, and he decided they were perfect for a “really cool, insane COVID-19-style mask.” The silver mask-turned-headpiece had a Galactica aspect to it that he says was “probably a little Lady Gaga-inspired before I even knew she’d be interested in it.”

“Lady Gaga was someone who I admired before all this happened,” he says. “If you’d asked me six months ago who I’d want to see my work on, it would’ve been Lady Gaga.”