The Swiss artist is showing a larger-than-life wax candle representing the actor and his parents at the Gagosian gallery in Paris.

KEEP THE FIRE BURNING: No one at the Gagosian gallery in Paris seemed fazed by the fact that Leonardo DiCaprio was visibly burning.

The Hollywood actor was chosen by Swiss artist Urs Fischer as the subject of his latest candle portrait, titled “Leo (George & Irmelin,”) in which he is depicted simultaneously hugging his mother, Irmelin Indenbirken, and gazing toward his father, George DiCaprio.

The three-figure composition could have been mistaken for a slightly larger-than-life statue were it not for the thick flame burning from the top of Leonardo DiCaprio’s head, trickling ominous black wax along its pink and white body.

“It lasts as long as you want,” shrugged Fischer during the preview of his exhibition at Gagosian on Monday, which coincides with Paris art fair FIAC and also features screen prints by the artist as well as “Smalls,” a selection of paintings by New York artist Spencer Sweeney. “You could make it last about eight months if you burn it very slowly.”

The plan is for the wax candle, which is snuffed out every evening at closing time, to gradually melt over the course of the exhibition, which runs until Dec. 20, symbolizing a meditation on the passing of time.

It’s not the first time Fischer has created a wax candle based on a member of his entourage. In 2016, he created a wax replica of artist Julian Schnabel, followed by another one of art patron and collector Dasha Zhukova in 2018.

“Leo asked me to do this project,” said Fischer, who met with DiCaprio and his parents in his New York studio to create the piece. “We installed multiple cameras to get them from every angle, and mixed different techniques to get to this result.” 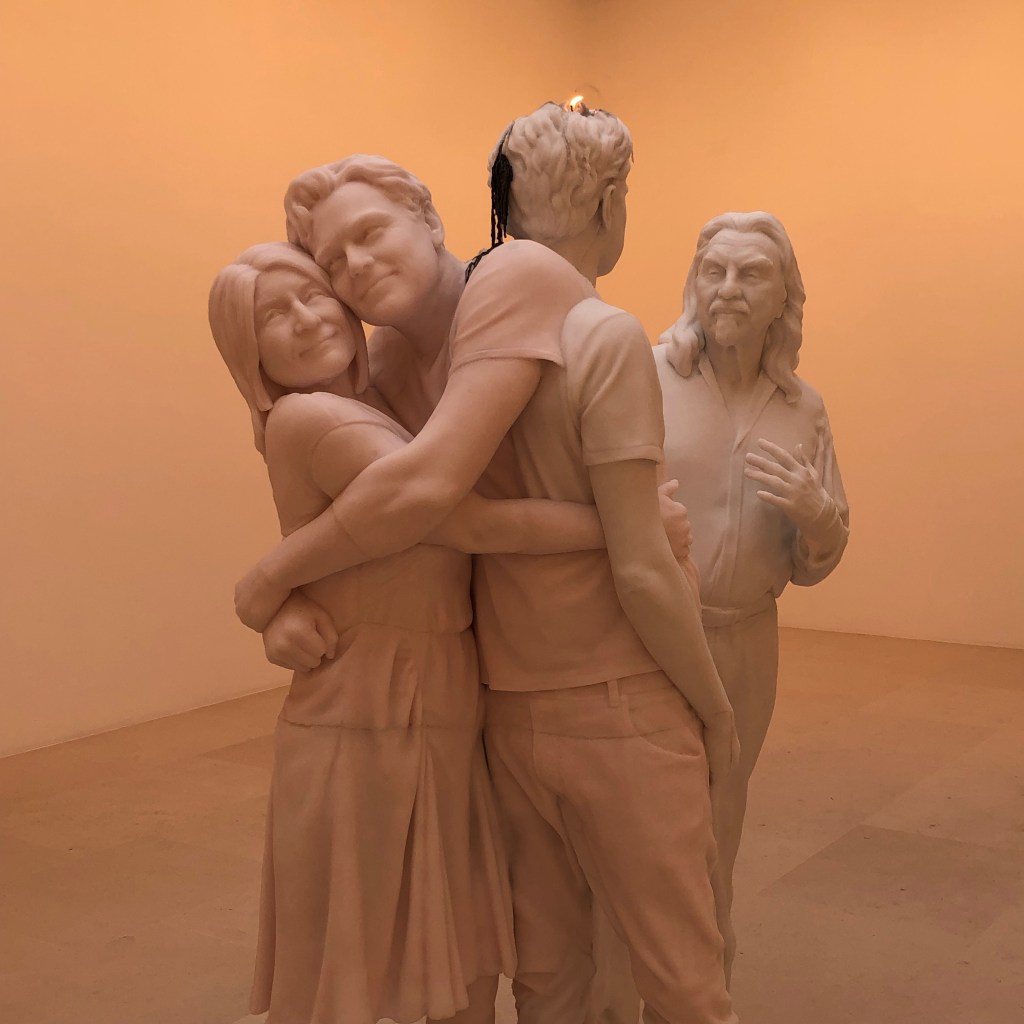 A view of the wax portrait on the day of the opening at Gagosian.  Fleur Burlet

The replica, which is filled with black wax, is strangely life-like: Hands, facial expressions and creases on clothing are particularly haunting. The wax figure of DiCaprio is split in two: The side of him that hugs his mother is done in light pink wax, while the other, looking over to his father, stays pristinely white. At the time of press, the back of DiCaprio’s white head was only slightly melted, leaking streams of black wax.

“It was a bit complicated to read before I changed the color,” said the artist, gesturing to Leo’s two pairs of legs, each pointing in different directions. “It caked together and got a bit lumpy. As soon as you introduce a bit of differentiation, it helps you understand.”

It’s useless to try to find any particular meaning in the characters’ postures, according to Fischer.

“It’s just how they were,” he said, gesturing to the two Leos, one warmly embracing his mother, who he is well known for being close to, the other seeming quite distant from his father. “I just looked at what is and put it together. I didn’t make it up. Everything you do in life is always an interpretation, but this is based on real moments.”