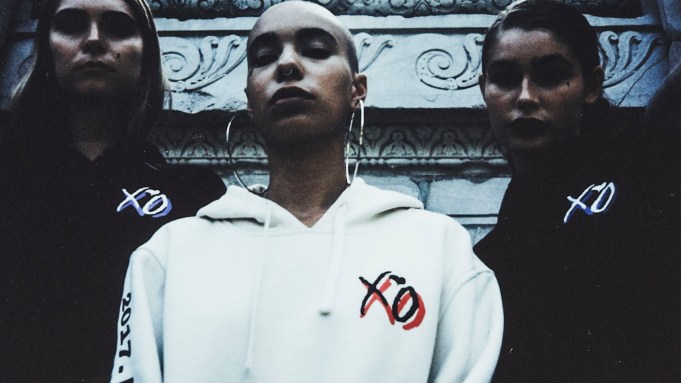 Just when The Weeknd fans were readying for his Puma XO Parallel launch, the singer has thrown another release their way. Today, he dropped another merchandise collection tied to his 2017 Starboy World Tour.

The new 14-piece set, aptly titled #003, marks The Weeknd’s third merch installment so far. Styles are geared more toward the fall and winter seasons and include a range of T-shirts, hoodies and a denim sherpa jacket decorated with the singer’s signature XO on the back — all in white, black and red hues.

The Weeknd has been busy with merch collections all year. In May, he put out a Starboy 2017 limited capsule collection that included T-shirts with “If It Ain’t XO Then It Gotta Go” printed on the front, hats that read “Party Monster,” bombers and sleeveless denim jackets with patches on the fronts and backs. The offerings were exclusively sold in pop-up shops in eight cities. The week prior, he dropped an XO artist capsule collection, for which he collaborated with graffiti artist Futura 2000. He also served as a guest stylist for H&M’s Spring Icons campaign in February.

Last week, it was revealed that The Weeknd would be performing at this year’s MTV Video Music Awards. Joining him as performers are Miley Cyrus, Kendrick Lamar, Ed Sheeran, Fifth Harmony, Lorde, Thirty Seconds to Mars, Shawn Mendes and Katy Perry, who will also be the host. The network revealed that it will be awarding its highest honor, the Video Vanguard Award, to singer Pink.

The Weeknd’s #003 merch is available on his web site. Click through the gallery above to see the look book.

The Weeknd, Miley Cyrus to Perform at the 2017 MTV VMAs