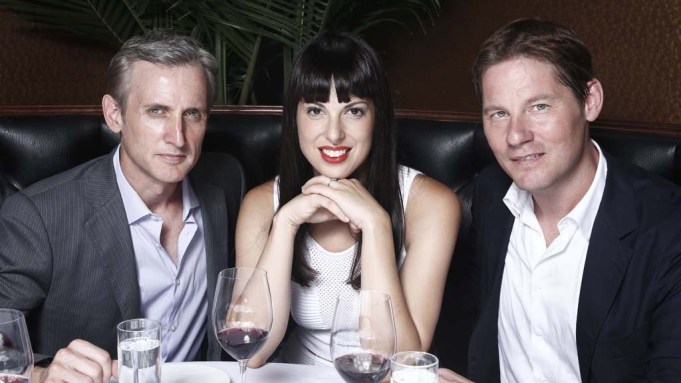 The notion of media mogul as restaurateur is kind of like celebrity-turned-designer — it’s not new and often not taken very seriously.

But Dan Abrams and Dave Zinczenko are throwing caution to the wind, despite an initial try. The duo had invested in The Lion, a once scene-y hot spot in 2010, but are no longer involved, although they still have some financial interest in the restaurant. With lofty hopes still intact to start their own restaurant, Abrams and Zinczenko looked for a third, like-minded, but more restaurant-savvy partner. They found her in Christine Cole, the general manager of BondSt, to run their boîte, which would serve farm-to-table food and carry a hefty and respectable wine list.

The trio scouted a location in TriBeCa and settled on a somewhat industrial-looking, 10,000-square-foot bi-level space on West Broadway between White and Franklin streets with high ceilings, charming fixtures and skylights. Picking a name was easy: White Street, perhaps the least obvious but most poetic of the options.

For the chef, they signed on Floyd Cardoz, known for New York restaurants Tabla and North End Grill, and recognized by most Americans from his win on Bravo’s “Top Chef Masters.” He created a new American menu that incorporates organic ingredients and nods to varied flavor profiles from Asian to Southern.

Abrams and Zinczenko are hoping this team will be a recipe for success, despite their busy schedules. Zinczenko, who is president and chief executive officer of Galvanized LLC, also serves as ABC News’ nutrition and wellness editor, and is a consultant for Bonnier Corp.’s books business, American Media Inc. and Random House. Abrams, who is coanchor of “Nightline,” and serves as ABC News’ chief legal affairs anchor, is also the owner of eight blogs, including Mediaite and Styleite.

With such full plates (pun intended) — and media-heavy ones at that — it’s not surprising that White Street could be seen as a pet project or a hobby, the likes of which other editors — the most prominent being Vanity Fair’s Graydon Carter — seem to dabble in.

But Abrams bristled at the comparison.

“Some media types get into restaurants and think that they’re the ones who really matter,” he said. “That sort of vanity isn’t fair to the real stars — the chefs.”

From a booth in White Street’s 5,000-square-foot dining room a few days before the official opening on Tuesday, Abrams and Zinczenko emphasized their devotion to the restaurant as Cole listened.

Their vision included a top-of-the-line wine list chosen by noted sommelier Natalie Tapken, as well as a cellar and an area in the restaurant dedicated to wines. At White Street, that area is at the front of the restaurant, and it takes the form of a large glass-encased walk-in storage room. For his part, Zinczenko really only had one demand — there would need to be a pizza oven for flatbreads.

Abrams winced at the price tag for that, but Zinczenko insisted and Cardoz agreed.

The editor acknowledged that his health-focused media gig ignited a passion for food, which led to his desire to open a restaurant. And that’s where the more-experienced Cole comes in.

“A great restaurant is about the food and the atmosphere. But even if those two things are right, the place won’t flourish if the staff is not happy,” Cole said. “There are a lot of miserable managers and staff who are overworked.”

“Yes,” Zinczenko said with a smile. “The parallels are there.”