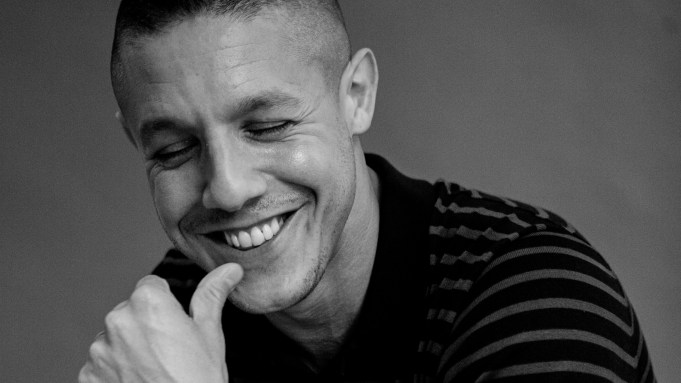 Not even actors can resist the temptation to binge-watch an entire series.

“My wife and I just banged out ‘Stranger Things’ in [what] felt like four days, and we don’t usually have the time to do that, but we’re so obsessed with the show,” actor Theo Rossi enthused of the breakout Netflix series, while posing for portraits one recent morning in a Midtown photo studio. Rossi has recently joined the Netflix family himself with today’s release of 13-episode series “Luke Cage.” While a TV series used to mean a full season of captive viewers, the Netflix model of releasing a series all at once tends to condense the experience.

“From my last show to now, we’ve become a binge-watch society, so everything has changed. We’re watching this almost like a chapter in a book — it’s like you can’t watch one or two [episodes], you have to watch all 13,” he continued. “When I watch shows now on Netflix, I don’t know if a character was on two episodes or 20, I just know that they were in the story. It’s very different — I think it’s changed the game tremendously.”

Rossi plays Shades — a “super shady” character — in the Marvel-based franchise. In the original comic book, Shades’ signature is a visor; the TV version modernized this prop as a pair of black sunglasses. “He’s the ultimate chess player, he knows what he’s doing five steps ahead,” Rossi detailed of his character. “He uses humans as pawns in a way — he’s got this giant plan and he’s always moving forward. To play someone like him is extremely different, because he’s an extremely cerebral character.”

The show, set in Harlem and filmed in Brooklyn, marks a sort of homecoming for Rossi, who recently returned to his home borough of Staten Island, N.Y., from Los Angeles. “I felt like I was on loan to L.A., I always knew I would come back,” he said. “I moved back and got the show like five minutes later, so it worked out pretty perfect,” he said. The actor had no intention of pursuing acting — adrift after college, he followed a friend’s lead and began taking classes at The Lee Strasberg Theatre & Film Institute near Union Square, initially viewing it as a good way to meet girls. “I got hooked, and I’m one of those people if I’m going to do something then I’m going to do it.” Rossi moved to L.A., where he started at the bottom and slowly worked his way up — extra work on “Sex and the City” and a Nickelodeon show earned him his SAG card. He continued to rack up bit credits in various shows before costarring on “Malcolm in the Middle” and landing a pivotal role on “Sons of Anarchy.” (Fans liked his character so much that he became a regular on the series.)

Being back in New York has continued to open new doors for Rossi: during the past edition of New York Fashion Week: Men’s, Rossi was enlisted to walk for Grungy Gentleman, opening and closing the show. “I think for me getting involved in the fashion industry was kind of like a natural progression,” he said. “It was extremely nerve-wracking, but at the same time, like, if you asked me before it, I would have said ‘What’s so hard, these guys walking in a show?’ Now, I’m like you have to know what’s going on, how you’re walking, how you’re standing…I have mad respect for the people who are doing that.” He’s also been busy promoting his water bottle company, Ounce Water, which riffs on the concept of a 40 oz. beer; the idea was born while working on his first studio film.

“They say that ideas may be developed on the West Coast, but they’re enacted on the East Coast,” Rossi said. “People work here and I’ve always been intrigued by that attitude of, like, ‘Let’s go and let’s do it.’ I’ve yet to see that anywhere else. We may complain, but we’re going to do it.”