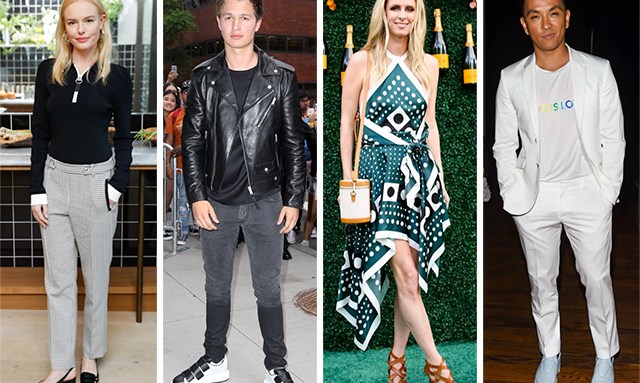 There are many markers of summer: Memorial Day weekend, when Range Rovers were packed and Jitneys were booked for the first weekend out east; the Summer Solstice, when sidewalk seating was suddenly acceptable and it was time, at last, to make the switch to iced lattes, and now, Fourth of July weekend, which for many is the official entryway into vacation time. So where are we jetting off to this year, darlings?

Nicky Hilton: “I’m going to go and see my in-laws, my husband’s family, in London for a bit. And then I’ll be back here I think, going to Southampton. Maybe I’ll go visit my family out in L.A. I’m just kind of over traveling too much.”

Paul Andrew: “In August, my partner Siddhartha and I are going to Greece, to Patmos, for a couple of weeks, where we go every year. It’s such a wonderful retreat. It’s very complicated to get there from here, and that’s part of the joy, because so many less people are going to that island instead of other Greek islands. There’s no Wi-Fi in the house that we rent, the phone doesn’t work — it’s so liberating.”

Gilles Mendel: “I’m going to Spain….Every summer for three months my parents would take me to a small place called Aigua Blava — it’s a little town on the north shore of Barcelona.”

Ansel Elgort: “I’m going to be on tour in July. I’m going to be in New Zealand, Australia, Malaysia, Brazil, Mexico. And then in August I’ll be in the Hamptons.”

Prabal Gurung: “I was just in Florence, and then I’m going to Tokyo, Norway, Berlin and India — all for work!”

Kate Bosworth: “Michael [Polish, her husband] and I are hoping to go to Montana. We have property there. For the last two years, I’ve worked on a TV show over the summer and it was great, but I’m really pleased to be able to go to Montana and have a real summer.”

G-Eazy: “I leave for Europe [this week]. I’m touring for a few weeks over there and then I do Asia and then I come back and I release my album. Yeah, ‘The Beautiful and Damned’ will be out this fall.”

Rachel Antonoff: “Summer’s always such a crazy time leading up to — we’re in spring development now. I feel like my traveling window is closing quickly. But I’m happy to just stick around.”

They Are…Guilt-Listening to Harry Styles