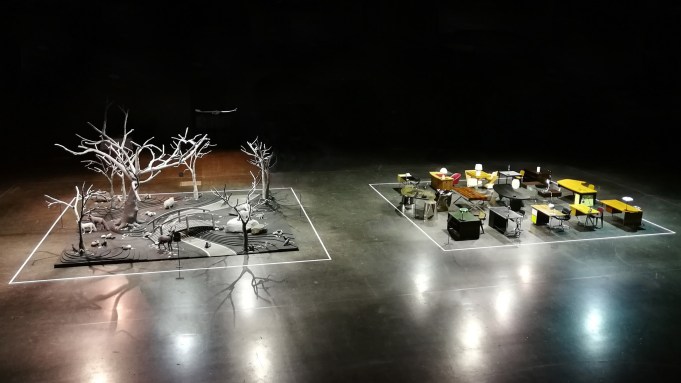 MILAN — Design Miami/Basel has asked Thom Browne to create an installation for its 2017 Design at Large platform. This is the fourth edition of the large-scale presentation and the first time a fashion designer has been charged to conceive it.

For the event held on Monday, Browne assembled 15 vintage desks, including statement pieces from Jean Prouvé and Ron Arad. The American designer, known for his grandiose and theatrical productions, re-created the set from his fall 2014 men’s runway show held in Paris: a Japanese-inspired garden. The desks were surrounded by trees, a little bridge, and animals made with fabrics. Browne also used desks as props for his show held in January 2009 at Pitti Uomo in Florence. At the time, 40 models typed at identical work stations, but in Basel, in a choreographed performance conceived for Design at Large, 15 young art students from Lausanne, Switzerland, all wearing Thom Browne, sat at the desks with paper and pencil to create their own works.

“I love doing my shows, but it’s nice to do something outside fashion,” said Browne, who enjoyed seeing the installation “come out of storage, live again and be seen by a different audience. It’s inspiring.” Browne said the desks at Basel were “among the most beautiful, created by the most important designers,” but they became “even more interesting because of their use, moving away from their utilitarian idea.” He emphasized how the artists, wearing his signature looks against the set, elevated everything to art. The performance also questioned the role of desks in today’s changing work environment.

Rodman Primack, creative director of Design Miami, said the Design at Large platform, curated in the past by the likes of Martina Mondadori, Dennis Freedman and André Balazs, requires a creative mind that has “a different perspective.” He elaborated, saying that “architecture and design are visible in the Thom Browne brand’s identity,” and praised the designer’s “rigorous language and discipline.” He enthused about the set. “It’s really incredible. It’s the first thing you see when you enter the fair, so it has to be really strong.” Primack started talking with Browne about the project a year ago. “His sets are so inspiring, beautiful objects and we discussed how to develop them and connect them with Design Miami. It all came about in a very natural way.” He highlighted Browne’s fascination with desks and how every store has one. “Ideas develop at a desk into reality and art,” he mused.

The installation will be shown at Design Miami/Basel, opening June 13 and closing June 18.

The New York-based designer, who was awarded the CFDA men’s wear designer award in 2006, 2013 and 2016, began his business with five suits and a small by-appointment-only shop in 2001, introducing his first men’s ready-to-wear collection in 2003, followed by a women’s division in 2011. His unusual suit proportions — cropped and tapered pants and shorts with shrunken jackets — put Browne on the map, and he has become known as one of the most directional designers in American fashion in both categories. The company has been expanding in Europe, with the opening of the brand’s first Milan store in April, as part of a new strategy following Sandbridge Capital’s acquisition of a majority stake in Thom Browne in May last year from Japan’s Stripe International.