Three Owls Market: One Part Bodega, One Part Restaurant, All for the Neighborhood

Picture this: you’re standing on Washington Street in New York City’s Meatpacking District, facing the Whitney Museum of American Art. There’s brunch spot du jour Bubby’s on the corner, and high-end clothing store Intermix on the other side. Keep walking down Washington, past the Hanro and Christian Louboutin shops. Leave the tourists and designer boutiques on Gansevoort. One block south, on Horatio Street, lies a small piece of the city’s forgotten vestiges — a real neighborhood, with longtime residents who care about their homes enough to attend community board meetings and check up on businesses entering the area. This is Suzanne Lehrer Dumaine’s dream spot, she says, for her new market-restaurant concept, Three Owls Market, which opens today.

“It’s at the intersection of so many things,” she explains one week prior, while her team prepares for the grand opening. “We are right next to tourist central, with the High Line and the Whitney. But I’ve met many of the people who work around here, and they have nowhere to eat for lunch. Besides sit-down restaurants, there’s nothing really filling that need.” 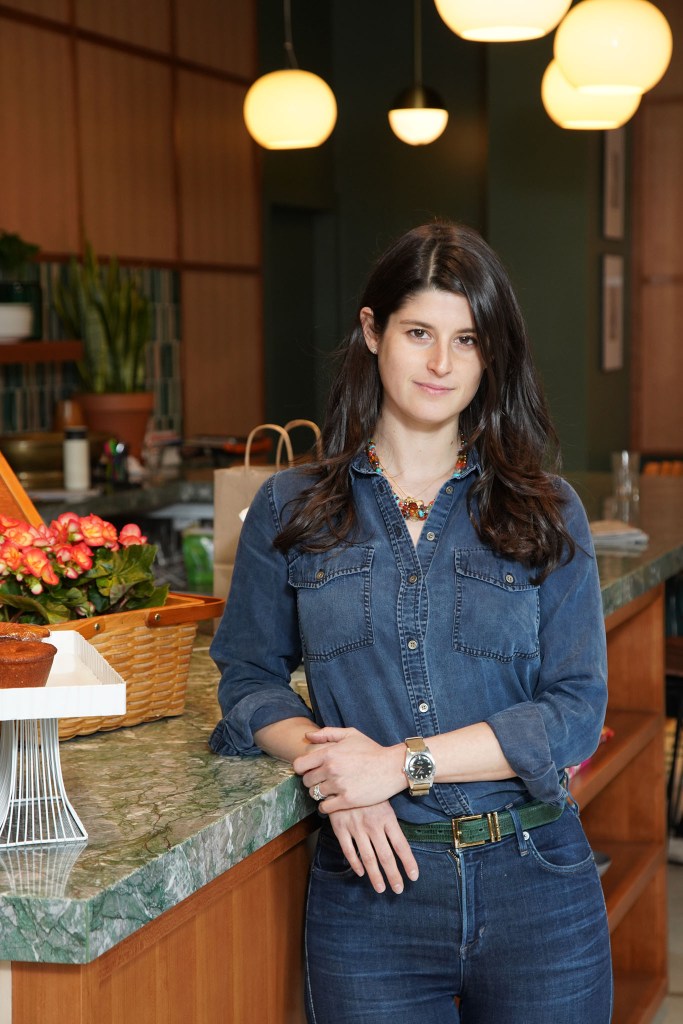 Lehrer Dumaine seeks to close the gap with Three Owls Market, which is one part bodega, one part prepared-foods all-day cafe and one part bar. The Mamaroneck, N.Y., native who lives close by, (“I’ve got it down to an eight-and-a-half-minute walk,” she says) hopes to serve the neighborhood with New York City bodega staples like Domino sugar, Heinz ketchup and toilet paper — and also feed and imbibe them, with a full menu of hot sandwiches, prepared vegetable dishes and rotisserie chicken, as well as craft beers and wine for happy hour.

To staff her full kitchen, Lehrer Dumaine brought in head chef Greer Lou, who previously worked as a private chef for Jessica Seinfeld at her Hamptons home, and is a veteran of Alice Waters’ Rome Sustainable Food Project. 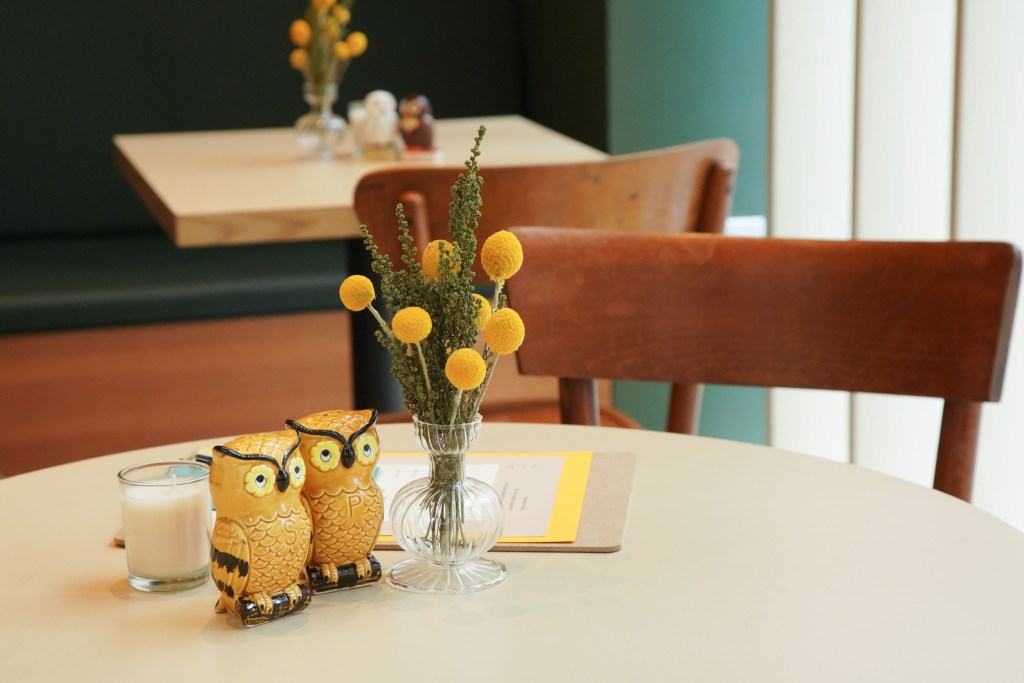 Lehrer Dumaine has been working on Three Owls since 2017. The landlord for the property informed her the previous tenant — the Nonno Gourmet deli and bodega run by a man named Charlie — wanted to hang up his hat. Lehrer Dumaine said yes, and started on renovations and acquiring a liquor license; a process she says allowed her to become closer with the community.

“The liquor license process required me to meet with the neighborhood associations around here,” she explains. “That was really eye-opening to me because I’d never been involved with city politics before — just seeing how influential the people who live in a neighborhood can be, determining what goes where. I had to give all these signatures from people in buildings right around here. I was asking for help from doormen, like, ‘Please leave this sheet out.’ 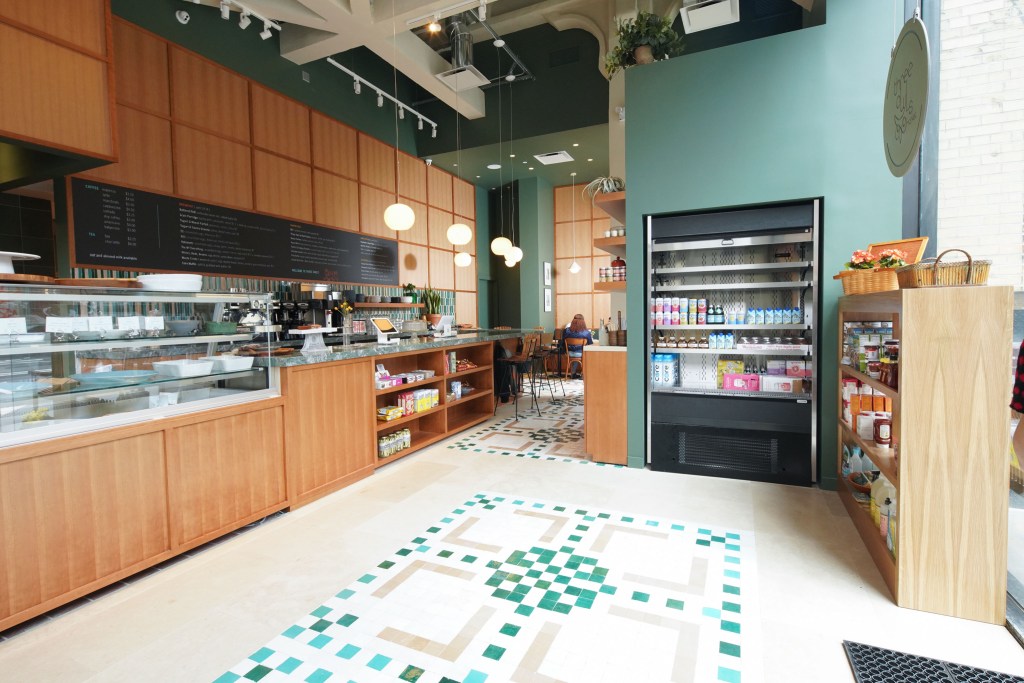 Being on the construction site for months also brought around neighborhood residents curious about what was going on.

“People were fascinated with what was happening in this space, and I think it was because there’s nothing else around here,” Lehrer Dumaine says. “Throughout the whole construction process, people have stopped by asking, ‘What is this? What is it going to be?’ There are some people who, now, when they walk in, it’s the fourth time I’ve seen them.”

Prior to pursuing Three Owls Market, Lehrer Dumaine worked at meal kit delivery service Plated, where she was the culinary director. Throughout her career, she’s had a focus on home cooking, but as she puts it, it was always “in this tech way.”

“I wanted to be closer to the customers,” she explains. “The best part about Plated was we were teaching people how to cook. But I wanted to talk to the customers myself, be close to the food and have my four walls. When I started to think about what’s next, it was brick-and-mortar or nothing. I just kind of had to go for it.”

Terror Jr., Once Rumored to Have Kylie Jenner as Lead Singer, Emerges With the Truth