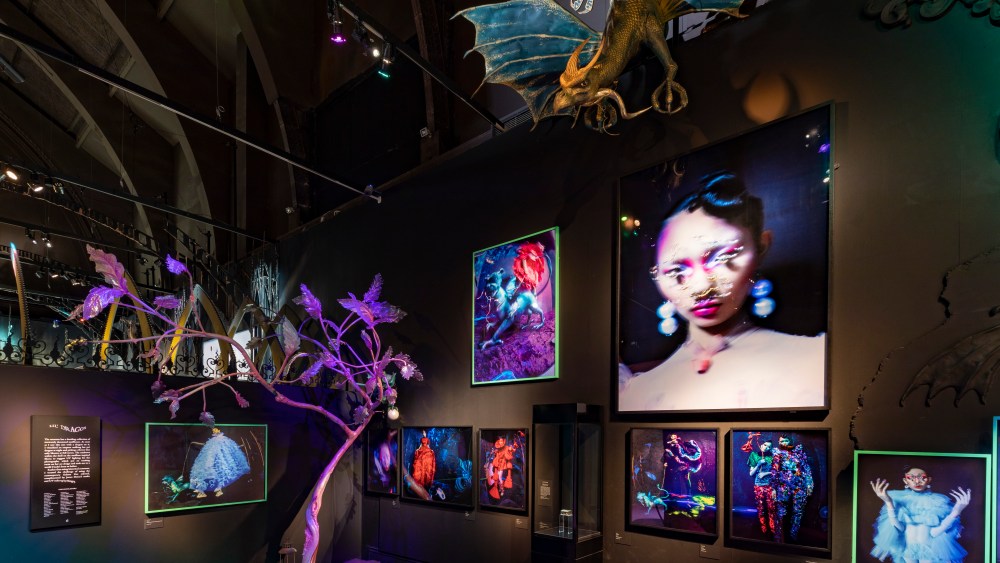 LONDON — Retrospectives? They’re so yesterday, and they’re certainly not for Tim Walker.

Instead, the British photographer created an entirely new body of work for his latest exhibition at the Victoria and Albert Museum, called “Wonderful Things.” It will run from Sept. 21 to March 8 and features a series of 10 new photographic projects directly inspired by the museum’s vast archive, which spans 5,000 years.

From illustrations and tapestries to a child’s casket, Walker spent a year on exploration and research, meeting with curators and conservators as well as visiting the museum’s underground passages. He also wrote the text accompanying the displays, a special request made by the curator of photographs, Susanna Brown.

“I really wanted for Tim to write that text himself so when you step into the gallery he immediately engages with you and he talks to you as if he’s having a conversation and then takes you on this fantastic, spectacular journey through his imagination,” Brown says.

Walker adds during a walk-through of the show: “Honoring [the V&A] in a genuine and meaningful way was something that I thought would be very hard to do, almost an impossible task, but being here and seeing it come to life, I feel really calm and I feel that I honored it.”

To find and shoot these “wonderful things” Walker worked closely with Brown and longtime collaborator and set designer Shona Heath. Coincidentally, Brown’s first acquisition for the museum was a collection of Walker’s photographs.

“We’ve known each other for a long time and like how a lot of good ideas are born. We went to have a cup of tea in the museum café and Tim started talking about his ambition to do another exhibition and it became apparent that neither of us wanted to do a show that was a typical retrospective,” Brown says.

As the idea started coming to fruition, Walker presented Brown with a list of departments and collections he wanted to engage with. From there, Brown asked her staff to bring out 10 favorite objects the museum looks after which have exciting stories behind them. They were the ones that Walker was drawn to.

“Often the thing that interested Tim more than just the aesthetic nature of an object was the provenance, the stories and the history. I think he is always captivated by stories because he is a storyteller in his photographs,” Brown says, referencing a teenage girl’s embroidered jewelry box from 1675.

To Walker, the box symbolized a treasure chest and he related it to modern-day life where a girl of the same age would use her phone to store secrets. This inspired him to photograph James Spencer — a London club scene regular who felt that he had to suppress his true self in his hometown. Much like this story, each one of the 10 projects or worlds has a narrative built around it.

Upon entry, there are two rooms of photographs that look back over the last 25 years of Walker’s work arranged by personal themes, such as “Into the Garden,” as the photographer spent a lot of time in his family home’s garden. “Off With Their Heads” is about fairy tales that have inspired Walker, and “Handshake” details the delicate relationship of portraiture work.

“The Chapel of Nudes” showcases Walker’s photographs of nude portraits, a subject that he has only started exploring in the last few years, inspired by artists Francis Bacon and Hieronymus Bosch.

From there, a darkened walkway leads visitors into Walker’s wonderful worlds. The first world envisaged by Walker was inspired by a stained glass from the 1520s and his photographs mimicked the look of a cracked window.

“You can see sometimes it is very obvious the picture it was inspired by,” says Heath, who built the sets around Walker’s inspirations. “We’d sit down to get the initial blood flowing. He is very communicative and what is nice is we both have a slightly different emotional response and on the day of the shoot, it will merge and becoming something different. It’s really magical to watch him shoot.”

While magical, the show was not without its creative and technical challenges. The series “Pen and Ink” was inspired by illustrator Aubrey Beardsley and “Cloud Nine” by a watercolor painting titled “Krishna and Indra.”

For Heath, who had the pleasure of looking at the largest collection of Beardsley drawings, she wanted to make the set look both 2-D and 3-D. “When I was given the task, I thought, ‘How do I make this into a 3-D world?’ I was really keen for them not to become very flat, so I drew with physical things with wire, beads or ropes. We used cutouts and distance and in the end they looked flattened so you could feel like they were illustrations again,” she says.

With “Cloud Nine,” Heath took on the challenge of printing on aluminum to re-create the vivid colors found in the watercolor painting. Other sets required her to create miniature landscapes of the English countryside and flowers from synthetic fabrics and foam. Heath says she had seven people dedicated to crafting them for two weeks. And for the first time, the two worked with luminescent materials and lighting to create glow in the dark imagery.

“That was quite a challenge and really exciting. We both really enjoyed it. It was quite difficult to get the lighting right, but the outcome is really beautiful,” Heath says.

In one of the last worlds, Walker paid tribute to the conservation department at the museum. During one of his visits, he watched an Alexander McQueen dress being preserved, and he created a shoot inspired by the wrapping up and unveiling of the gown.

To accompany his series, Walker produced two films, one inspired by paper dolls from the V&A’s Museum of Childhood, narrated by actress Gwendoline Christie and another, a modern-day re-creation of the “Steadfast Tin Soldier” by Hans Christian Andersen. Walker’s version centers around a tin soldier and a knight falling in love.

The photographer also got his team to film behind-the-scenes footage on a Super 8 film camera. “We have interspersed the new photo shoots with some of Tim’s very soft, flickering Super 8 films, they are very short but they give a different dimension to the still photograph and add another layer to things,” Brown says.

“It’s very different to our usual approach at the V&A to photography shows, it’s quite unlike any other that I have worked on and for me, it is a great joy to work with a living photographer. I am beyond happy with the outcome and I think our visitors will find it incredibly touching and it is partly to do with the heart and soul that he pours into everything he does,” she adds.