NEW YORK — Cropped black-and-white photographs of musclebound men fill the yellowing pages of a time-worn scrapbook. A body builder, showcasing his chiseled physique in little more than a strategically placed gathering of cloth, is pasted alongside another bare-chested model in partially unzipped black leather pants and boots.

Touko Laaksonen, widely known by his pseudonym Tom of Finland, used these real-life examples of the male form — many of which he photographed himself — as inspiration for his oeuvre of hyper-masculine homoerotic drawings. Largely marginalized during his lifetime, the Finnish-born Laaksonen is now widely regarded as a trailblazer of modern gay culture.

For the Spanish-born Prada, Tom of Finland’s sexually charged illustrations of the virile and strapping male form have long served as an unlikely muse. Prada, who identifies as lesbian, was raised in her family-owned hair salon surrounded by images of male beauty. “I grew up as a kind of gay boy,” she says. “The first kiss I gave was a male mannequin. I’m a difficult combination of things.”

Coming of age in the Eighties, Prada steeped herself in the era’s pop culture, with her first exposure to Tom of Finland from an Andy Warhol article in Interview Magazine. “It’s not pornography, it’s so sensual and for me it’s less about sex and more about fantasy,” she adds. “It’s beyond gender. It’s about liberation.”

Given her deep personal connection to Laaksonen’s work, Prada gladly accepted the opportunity to partner with the Tom of Finland Foundation on a limited-edition book of her own pencil sketches using the late artist’s original scrapbook as inspiration. “It’s important to do this through the vision of a woman,” notes Prada. “You have to see women here [in my art] as well — it’s about the shape [of the bodies].” 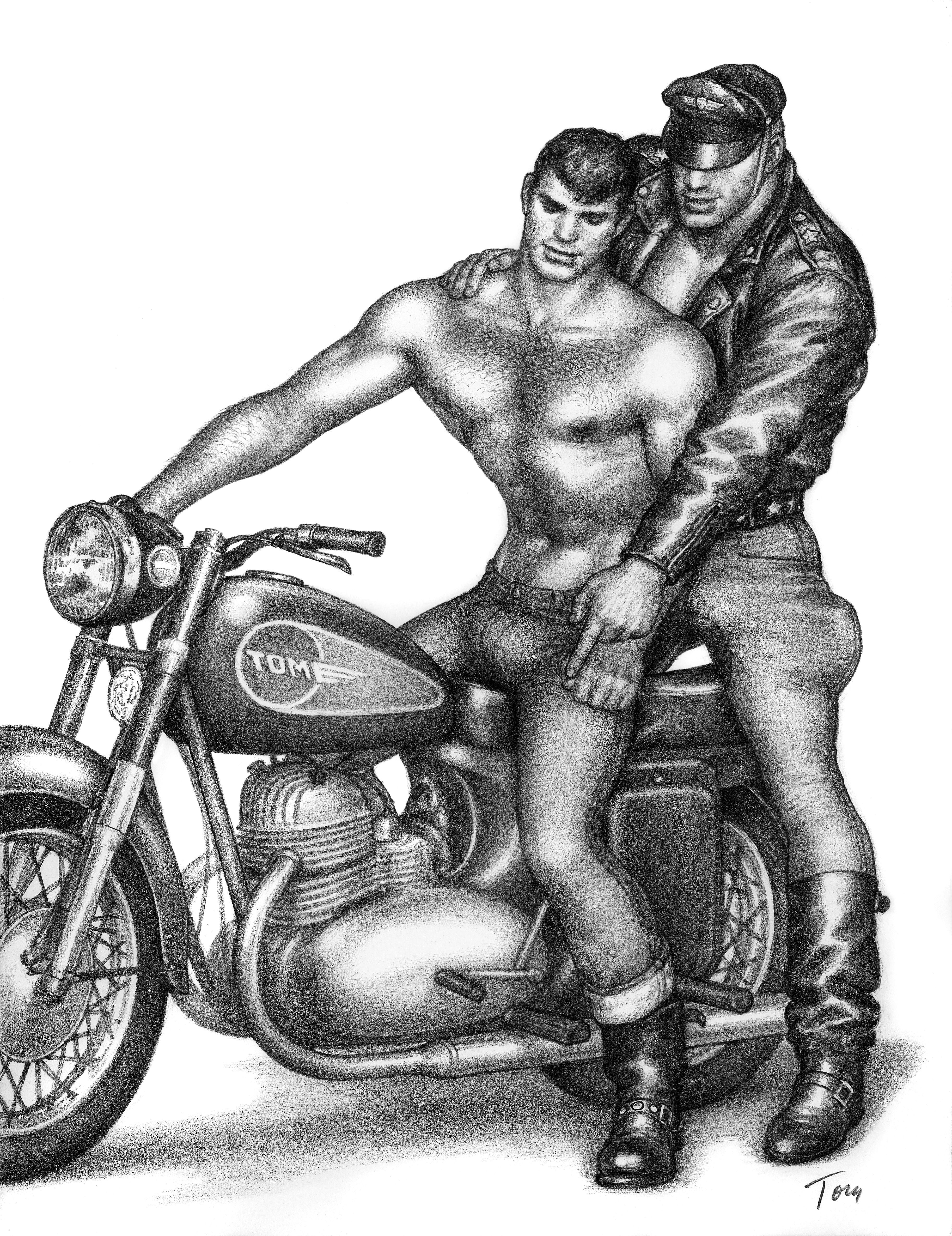 Drawing by Tom of Finland

“With that ethos in mind we constantly work to nurture contemporary artists and their interpretation of Tom,” he adds. “Universally [with Tom’s art] there’s this really positive message of respect, tolerance and sexual freedom.”

In recent years, a broader acceptance of homosexuality and gay culture has allowed the work of Tom of Finland and others to reach an audience that Laaksonen himself would have never imagined. Andreasson points to teenagers in Finland “walking around with Tom of Finland tote bags” or middle-aged women “buying Tom of Finland sheets at their local mall.” The brand’s popularity was cemented in mainstream European culture by the 2014 release of Finnish stamps bearing Laaksonen’s homoerotic drawings. “To have Finland — his native country — carry [the work of] Tom is a hugely instrumental part of marketing [the art] in the broader picture,” adds Andreasson.

It’s this level of acceptance that Laaksonen, who served in the Finnish army during WWII, never fully experienced during his lifetime. Now recognized by New York’s Museum of Modern Art and Los Angeles’ Museum of Contemporary Art — most significantly with a 2013 exhibition alongside the work of photographer Bob Mizer — the artist, who once worked as an ad illustrator, spent the bulk of his formative years in the shadows.

A biopic titled “Tom of Finland,” released earlier this year by Kino Lorber, shows the titular character a victim of the violent police raids on underground gay bars in Europe during the late Forties and Fifties. It was first through his pencil sketches, depicting masculine archetypes of bikers, cops and military officers that Laaksonen was fully able to express himself.