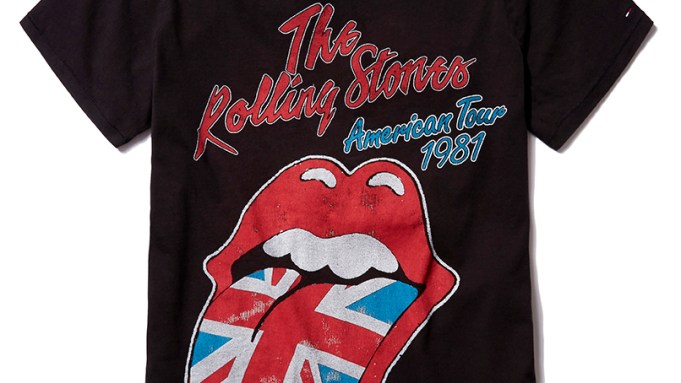 Tommy Hilfiger will be the official apparel sponsor of “Exhibitionism” an international moving exhibition that will be unveiled at the Saatchi Gallery in London on April 5. The brand has also designed a limited-edition capsule in conjunction with the partnership. The lineup of graphic T-shirts and outerwear, laden with the band’s iconic tongue-y mouth, will launch on tommy.com. The collection features five unisex Ts as well as men’s and women’s jackets, including leather jackets with hand-painted Rolling Stones imagery emblazoned on the back; distressed and bleached jackets with vintage Stones artwork; satin bombers with embroidered tongue logos; and utility jackets with patches.

“Exhibitionism” is a retrospective of sorts, a comprehensive compendium of the band’s musical heritage. It features more than 500 rare and original Rolling Stones’ artifacts, ranging from never-before-seen dressing room paraphernalia to instruments, iconic costumes, personal diaries and artwork, rare audio recordings and video footage. It’s divided into nine galleries at the Saatchi Gallery, where it will be on display until Sept. 4 when it will head out on a global tour over the next four years.