TriBeCa Film Festival 2016: ‘The Devil and the Deep Blue Sea’

Jessica Biel starred in and helped produce the film. 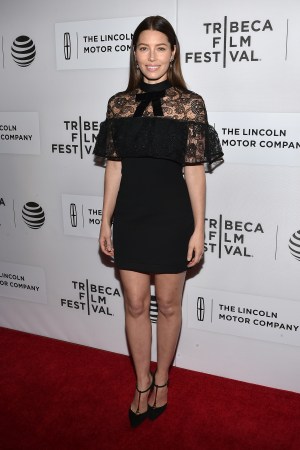 Justin Timberlake has another film credit on his IMDb page — but not for acting. The musician and actor composed the music for “The Devil and the Deep Blue Sea,” which had its worldwide premiere at the TriBeCa Film Festival on Thursday evening. While he declined speaking to most press, the new father did stop for an interview with two TriBeCa Kids Access student reporters. His wife Jessica Biel is featured in and helped to produce the film.

“[Timberlake] asked, ‘Hey who’s doing your music? I’d be into doing it,'” remarked director Bill Purple from the carpet. “So we took his offer, as you can imagine. This is his first score.” The film was truly a family affair — Purple’s wife, Michelle, also runs a production company with Biel. “The best part of [Biel] is she’s super honest,” the director continued. “She’s not afraid to give her opinion. If she doesn’t like something or thinks something is wrong, you’ll know it.”

Biel and Timberlake were joined on the carpet by castmates Maisie Williams, Jason Sudeikis, Bryan Batt and Jayson Warner Smith. The movie, which was shot on location in New Orleans, tells the story of Henry — portrayed by Sudeikis — who loses his wife — played by Biel — in a car accident. In his healing process he befriends Millie, a runaway teen played by Williams, and helps her built a raft to sail across the Atlantic.

“She’s been alone for so long that she’s never had anyone come up to her and be like ‘Oh hey you’re doing good, hang in there,'” Williams remarked about her character in the film. “It’s not until she meets Henry and he is happy to admit that he’s upset and that he’s hurting that she realizes it’s OK to carry that weight.”