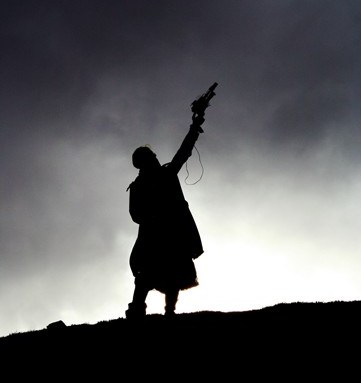 As fringe groups go, some are pretty easy to recognize, even for an outsider. Head-to-toe black, massive crosses and heavy eyeliner? Goth. Rainbow-hued Mohawks and safety pins as jewelry? Punk. Grillz, ultralow jeans and a major pair of kicks? Hip-hop. But steampunk is a whole new kind of retro rebellion, and its complicated rules make it difficult for mainstream to co-opt its look. Which suits its followers just fine.

“Steampunk is Victorian science fiction,” says Diana Vick, vice chair of Steamcon, a steampunk convention that bowed in October in Seattle and attracted more than 1,300 attendees. “But I’m considered a purist in my crowd. The author who coined the term, K.W. Jeter, calls steampunk ‘altered science fiction based on the Victorian era.’ I also coined a phrase: ‘steampunk needs historical accuracy like a dirigible needs a goldfish.’ Steampunk is a very accepting community, and a lot of it is about the story. I just try to encourage people to realize that steampunk is not the catchall phrase that people want it to be.”

Incorporating equal parts grit, romance and fantastical technology, steampunk has risen in recent years from a tiny subculture to a self-contained commercial enterprise, complete with its own fashion, conventions and bands. Furthermore, bucking the trend of most subculture developments, steampunk fashion developed before steampunk music.

So what defines steampunk style? “In order for an outfit to be steampunk, and not just a Victorian homage, it has to contain both antique aspects and at least one non sequitur,” says Libby Bulloff, fashion reporter for The Steampunk Workshop, an online guide to all things steampunk. “For example, a bustle skirt done up in leather or Neoprene is steampunk.

“The fact that we’re in a recession and people just don’t have a lot of additional income for clothing has contributed to the hunger for fashion that can be cobbled together,” adds Bulloff, who also works as a photographer chronicling the steampunk scene. “Being fashionably behind the times is also way more fun.”

Because of the DIY element, many steampunks are finding themselves drawn to Web sites such as Etsy.com, where crafty designers are meeting the needs of this growing community. “Before I started working at Etsy, I had never heard of steampunk,” says Alison Feldmann, style editor for the blog at Etsy.com. “Then I saw things come up that were unlike the other stuff I was familiar with, and I started to learn more about what steampunk was. Now it’s totally hitting pop culture. It’s in television shows and movies like the Sherlock Holmes film. It’s not just a fringe thing anymore.”

While the music came later, it did come, sort of. “Whether or not there is a steampunk music yet is one of the most debated subjects in steampunk,” says Jordan Block, who runs Sepiachord, a steampunk-centric music Web site. “My theory is, if there’s music that can be recommended to steampunks, it should exhibit traits similar to the visual aspects of the steampunk aesthetics. In essence, steampunk music should take pre-modern elements, be they instrumentation, song style or staging and costume configuration, and twist that with a postmodern mind-set.”

One of the genre’s most popular bands right now is Abney Park, whose latest release, Aether Shanties, dropped in December. “Abney Park has embraced steampunk in every way a band can embrace it, from our sound to our clothing to our instruments to our studio, and even to the locations we play, such as Victorian steamships and Victorian power plants,” says Captain Robert, front man for the band, who headlined the Steamcon convention. “And we’ve nearly made a career solely from playing steampunk conventions.”

Over the past year, steampunks have been moving from fringe festivals to the edges of mainstream, and conventions aren’t the only places to spot the bits and bobs that make up the look. “I see men everywhere incorporating classic men’s fashion elements that are purely for the fun of fashion,” says Block. “Nice hats, vests and waistcoats, and classically cut shirts. These are men who clearly have no connection to the steampunk underground. I was at a bar a few weeks back and I saw two men using pocket watches. Pocket watches. At a hipster bar.”

And even a purist such as Vick has found elements of her look in mainstream stores. “I find a lot of great things in places like Forever 21,” says Vick. “ Military jackets, shirts with lace, little tiny top hats, tons of buckles, cameos.”

So, has steampunk hit the mainstream yet? “Steampunk hasn’t quite reached the point where everyone knows what it is,” says Feldmann. “This is an interesting time to observe steampunk. It’s growing, and it could definitely challenge Goth as a subculture.”

The better question might be whether people in the steampunk community care anything about mainstream acceptance. “My rule is that until The Simpsons or South Park makes fun of something, it hasn’t peaked,” says Block. “Thanks to the interconnectivity of the Net, [steampunk can] maintain a happy level of being underground without ever getting huge, and without ever becoming mainstream. Steampunks are becoming their own media, their own fashion icons, their own culture builders.”