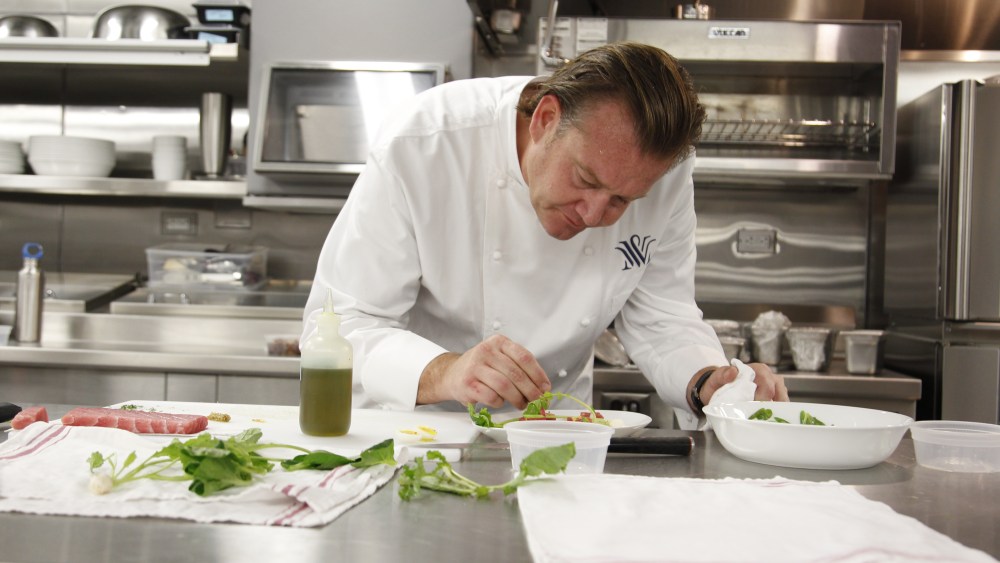 On Wednesday, the Midtown dining scene in Manhattan gets a brand-new eatery with the opening of Vaucluse, the brasserie concept from Michael White and Ahmass Fakahany.

The spacious French restaurant, named for a region in Provence, is the culinary duo’s 18th opening after Marea, Ai Fiori and Osteria Morini, among others.

“It’s been a restaurant space since 1927,” Fakahany says of the historic venue at Park Avenue and 63rd street. “There’s a little bit of romanticism to it.”

The opening marks the latest restaurant to appear in an area of north Midtown previously lacking in buzz, a shift led by Ralph Lauren’s Polo Bar, which opened earlier this year.

“This part of Midtown has not had its due. If you look at the menu and prices, you see we want to create the new Park Avenue. We want to break that thing that you have uptown where you walk in and a veal chop is $60-plus,” Fakahany says.

Fakahany, who was born in Cairo and grew up in Switzerland and England, has always had a soft spot for hospitality.

“I wanted to go to hotel management but you had to speak four European languages so that didn’t happen. And my father was just totally delighted that this madness had stopped,” he recalls. “So I went into business, first business school and eventually Merrill Lynch until I became president, but this seed never died. And you shouldn’t be in this business without a passion, and a huge amount of paranoia as well.”

In 2007, he partnered with White, who grew up in Wisconsin and made his name at Chicago’s famed Spiaggia, for their first venture, Due Terre in New Jersey. Two years after, the opening of Marea near Columbus Circle would be the beginning of their mini-empire, the Altamarea Group, which also includes Nicoletta in New York and Chop Shop in London.

“I think people increasingly want less innovation with their food and more want something they recognize,” White says. “Something that tastes just as they hoped it would.”

Vaucluse is a modern brasserie, “elevated, so it’s not a bistro — but brasserie means it is accessible, it’s approachable,” Fakahany says. The interior has been overhauled from the past occupant, the seasonally rotating Park Avenue Summer, and seats 186 guests, including two private dining rooms. It is the first time the business partners passed on design duties to someone else, the boutique design firm Meyer Davis.

“There isn’t this kind of comfy, approachable food on the Upper East Side. The waitstaff here are not wearing jackets,” Fakahany says.

As for the menu, White rooted it in traditional French fare. “The overall balance of the menu is what I’m most proud of,” the chef says. “It’s a restaurant you can come to often. This neighborhood is very residential, and this is going to be a neighborhood restaurant. We wanted to create a menu that invokes the French feeling with a little bit of New York at the same time, because we don’t want to get mired in this very focused French restaurant.”

Fakahany too appreciates the diversity in selection.

“I like that we have a section dedicated to composed vegetables dishes. I feel sometimes I want to eat this way and so I avoid a French place, because I don’t want a baguette and cheese, so I like very much that we did that section,” he says.

Still, there are some French classics he can’t live without, like the beef bourguignon: “It’s just very soft,” he says.