MILAN — After building up a successful career in the world of tech start-ups, sovereign funds and insurance companies, a decade ago Swedish-Norwegian entrepreneur Alex Vik and his wife Carrie created Vik Retreats, an innovative, luxury hospitality concept where art and design deeply influence the five-star staying experience.

The Viks kicked off their project in the Uruguayan beach town of José Ignacio, where they operate three high-end yet highly intimate properties, called Estancia Vik, Playa Vik and Bahia Vik.

On the heels of their success in Uruguay, in 2014 they moved their attention to Chile, inaugurating the Viña Vik winery and the Vik Chile Hotel in the Millahue Valley, about two hours from Santiago. Vik Retreats is currently putting the finishing touches on the 19 glass-walled bungalows of the new Puro Vik project, which will also host an event space and a wellness center.

At the same time, Vik Retreats crossed the Atlantic Ocean to make its foray in the city hotel business with a luxury property in the heart of Milan, which was inaugurated last September.

“Alex and I really wanted to do a city hotel. We focused on places where we spent time over the years and in the past 25 years we actually traveled a lot to Milan,” said Carrie Vik, who, though constantly traveling, resides with her husband in Monte Carlo, a three-hour drive from Milan.

The power couple actually learnt about the opportunity to take over the former Townhouse Galleria hotel located inside Milan’s prestigious Galleria Vittorio Emanuele II luxury shopping arcade from a friend in Monte Carlo. 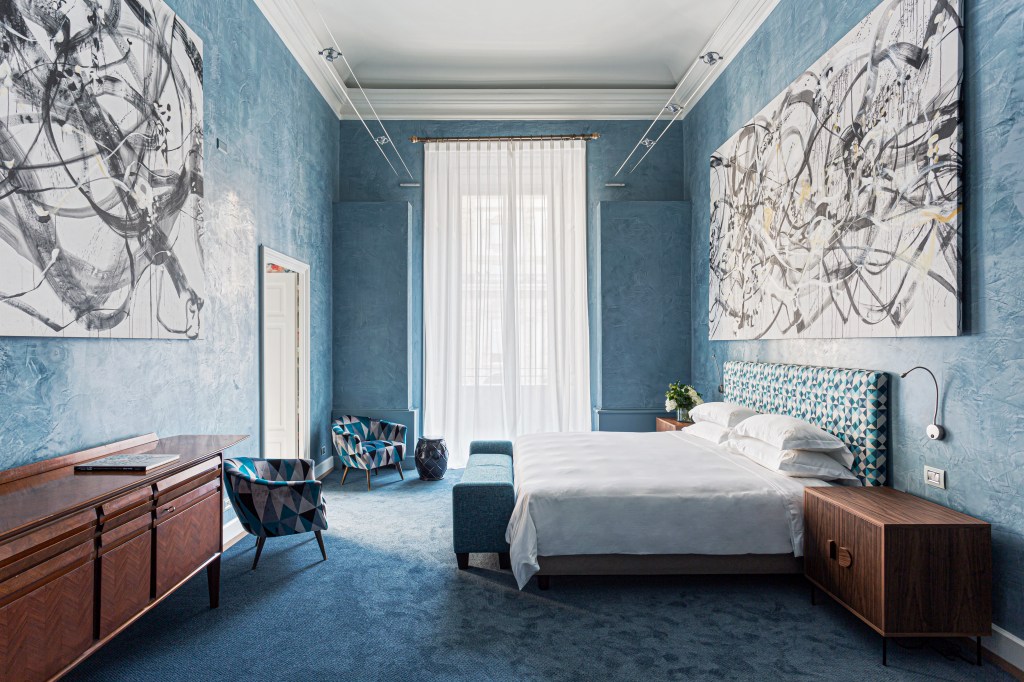 One of the rooms of the Galleria Vik Milano house with artworks by Viky B.  Courtesy Photo

“We immediately went to Milan to check it out and we found it very fascinating. So we decided to pursue the opportunity,” explained Carrie Vik, praising the new uplifting energy vibrating in Milan over the past few years. “Milan is the center of the design world, so we thought that Milan deserved a project like this,” she added.

According to media reports here, Vik Retreats would have acquired the concession from Townhouse for a sum of 18 million euros.

While respecting the strict limits and rules imposed by the Superintendence for Architectural and Urban Landscaping, the building, which is part of the city’s public property, was completely refurbished inside by Carrie and Alex, in collaboration with Uruguayan architect Marcelo Daglio.

In particular, the new Galleria Vik Milan features 89 rooms of different sizes — including suites with double height ceilings and multiple arch windows overlooking the Galleria Vittorio Emanuele II and the La Scala Theater — and all featuring unique layouts and decor. 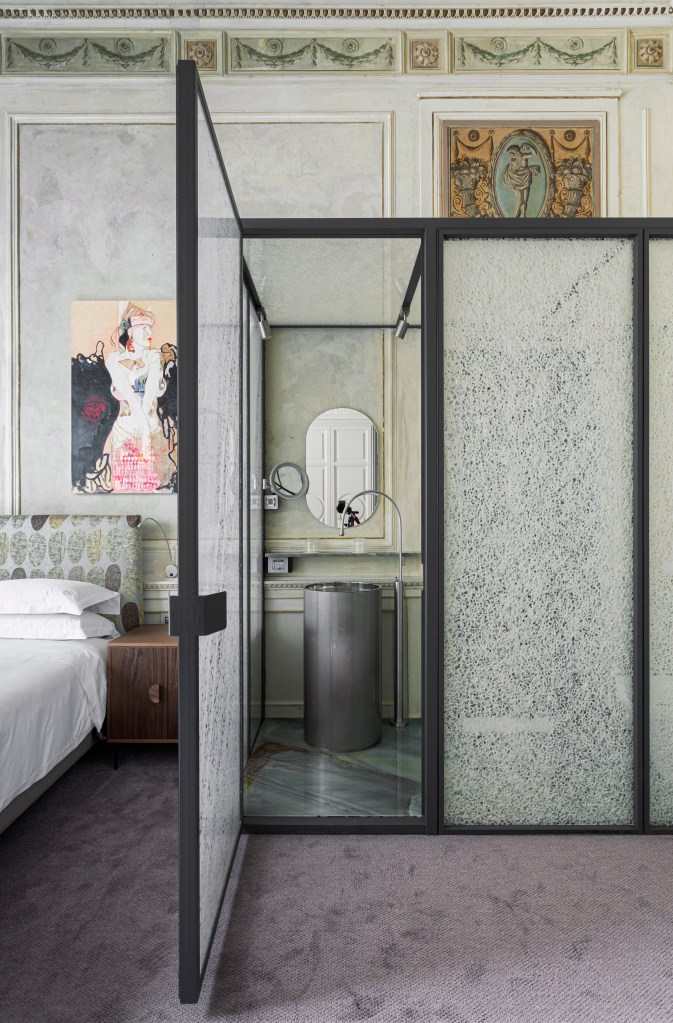 “For me, what makes this hotel different and unique is design and art. There are lots of beautiful hotels in Milan and all over the world. I think that what we do is a bit different…the individuality of each room, the art aspect,” Carrie Vik commented. “A lot of hotels have art inside, but we actually collaborate with artists. They bring such creativity and enthusiasm to each room. They really add a lot to the hotel experience.”

Paintings, murals and sculptures are disseminated across the hotel — in the rooms, in the hallways, in the lobby, which is decorated with an official reproduction of Auguste Rodin’s “The Thinker” bronze sculpture, along with a mural by Italian artist Alex Folla, who painted eight mythological characters holding the globe — making the hotel an actual art gallery.

Along a very unique mix of contemporary, modern, vintage and antiques furniture pieces, personally scouted by Carrie Vik around the world, the five floors of the hotel are preciously decorated with artworks from 90 Italian and international artists, including Mario Schifano, Elena Trallini, Liu Bolin, Felipe Cardeña, Tomoko Nagao, Vicky Barranguet and Rita Fischer to cite only a few. 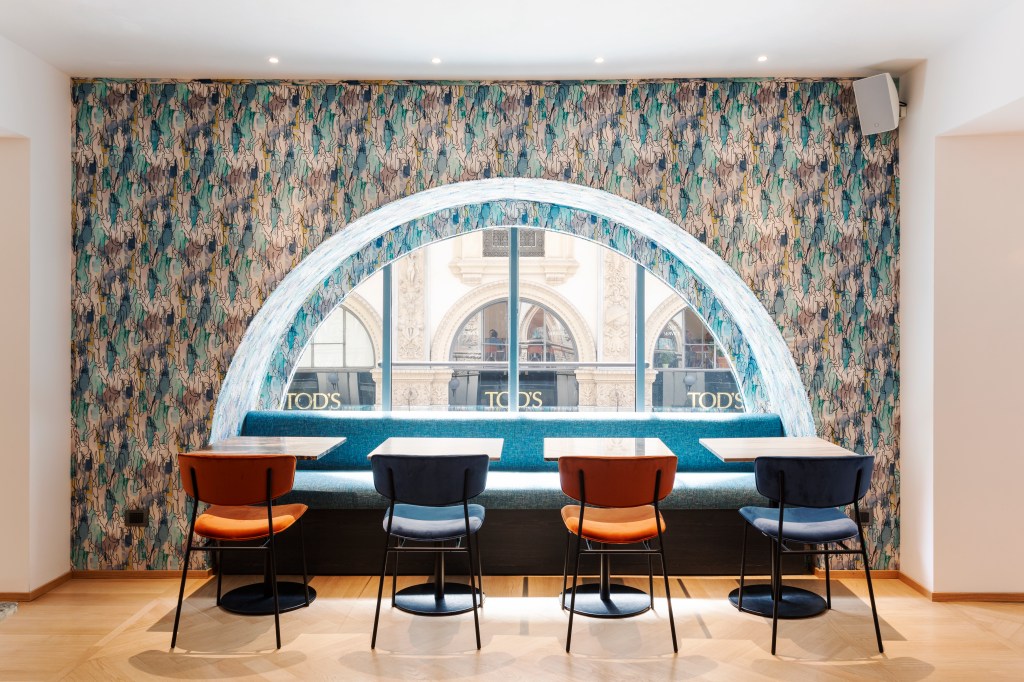 The creative extravaganza continues on the 2,691-square-foot space of the Vikissimo restaurant located on the second floor of Galleria Vik Milano. Each art piece showcased inside the venue, which is open from breakfast to late night, is on sale. Featuring a unique view of the center of the Galleria Vittorio Emanuele II, the restaurant offers a menu by Uruguayan executive chef German Bentancur who combined South American flavors with Italian cuisine. Along with a special selection of cocktails, the Vikissimo bar, located in the same area, serves the Vik wines produced in Chile and listed in 2018 by Wine Spectator among the 100 best wines in the world.

Asked about the idea of further expand the company’s city hospitality business, Carrie Vik said that “this one in Milan is the first test, but we are definitely evaluating other opportunities. The goal is to continue offering unique experiences and best hotel services. We are not a group, we are personally involved in every aspect. Vik Retreats will never be just a chain.”