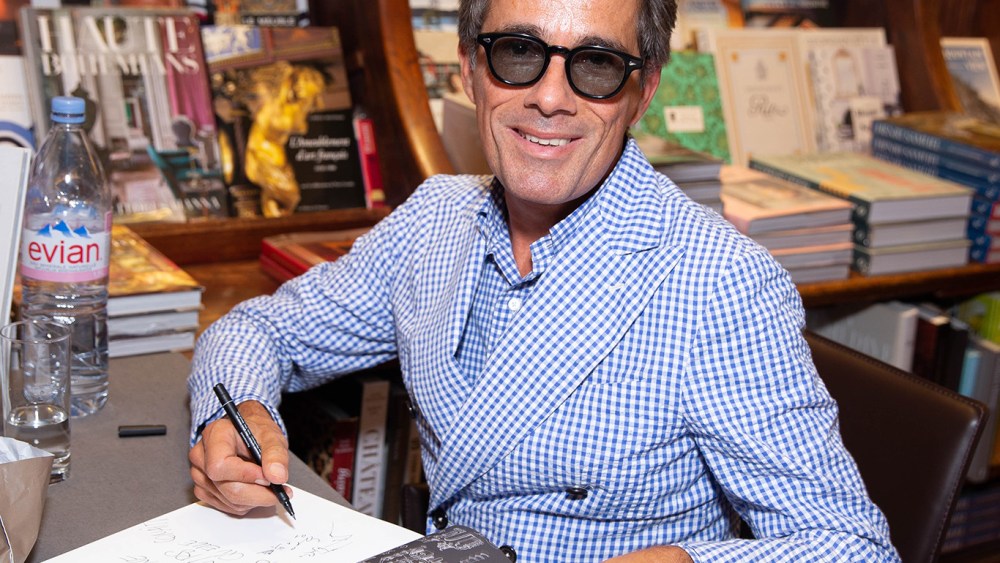 DIVINE DECOR — Interior designer and decorator Vincent Darré has put together his first book, a retrospective of his past projects.

By Rizzoli, “Intérieurs Surréalistes,” “Surrealist Interiors” in English, looks back to some of the decorator’s most exciting projects, explaining their context and inspirations. A colorful dining room, complete with a rug by Fernand Léger, was created in homage to Gogo Cacciapuoti, Elsa Schiaparelli’s daughter.

“All my work stems from memories and people that I meet,” Darré said at his book signing on Sept. 26 at the Librairie Galignani on the Rue de Rivoli. “In this book, you will find all my friends, such as architect Andrée Putman and illustrator Pierre Le-Tan, who then introduced me to the work of Christian Bérand and Jean-Michel Frank.”

Designed to resemble a diary, the book is peppered with drawings and collages. Sitting at a wooden desk at the back of the bookshop, Darré lavishly decorated each edition with an illustrated dedication. The crowd was a mix of old friends, such as Catherine Baba, Vanessa Seward and Arielle Dombasle, as well as Instagram acquaintances.

“As I am quite an eccentric in this line of work, I sometimes doubt myself,” the decorator said. “I start thinking that I might be crazy. But then I get a message from someone on Instagram who tells me how much he likes my work, and I believe in myself again. I wanted to thank them by inviting them tonight.”

Jewelry designer Elie Top chose to collaborate with Darré on the decoration of his jewelry salon, which opened on the Rue Saint Honoré three years ago and is featured in the book. “It’s a mix of my taste and his, with references to the Wiener Werkstätte, engraved glass and vintage chairs found at flea markets,” Top said.

For Inès de la Fressange, Darré is “the French Cecil Beaton.” She remembered the decorator at home painting the shutters vivid colors and marveled at his ability to “enchant any space he’s in.”

De la Fressange is releasing a new book on Parisian apartments with Flammarion in October, inspired by the mix-and-match approach spotted within the younger generations of Parisians. “I realized people were mixing vintage and contemporary furniture, a Formica table found on eBay and an 18th-century mirror picked up at a flea market,” she said. “It’s like with clothes: When you change a bedspread or a lamp, it has the same effect as when a woman changes her shoes and earrings.”

Designer Martine Sitbon, who was queuing to get her book signed with husband Marc Ascoli, said she favored spaces that had a real history. “I like where I live and where I work to have a real soul,” she said, adding she only very rarely allowed herself to add decorative touches to the existing architecture, such as a colored wall. It’s especially important when it comes to shops: “For a brand, a shop is the first way to communicate with the public, before a fashion show or an advertising campaign. It has to show personality.”

At home, accessories designer Yazbukey likes to play around with random objects to create stories. “I buy plastic animals and set up scenes, and constantly change them,” she said. “I feel like they have their own life. I’m quite superstitious.”