Her new book explores the topic as seductive cultural force that extends far beyond the more expected areas of fashion and film. 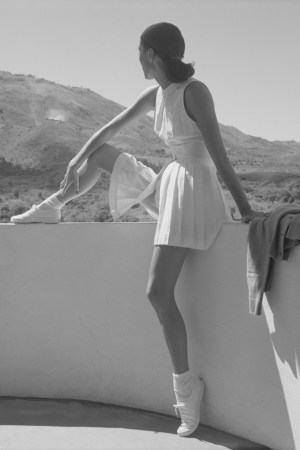 For the cover of her new book “The Power of Glamour: Longing and the Art of Visual Persuasion,” Virginia Postrel went with a 1947 Toni Frissell photo of a woman wearing tennis whites overlooking the hills of Haiti.

The 229 pages that follow explore the topic as seductive cultural force that extends far beyond the more expected areas of fashion and film. With 100 images and an in-depth reasoning, the Bloomberg View columnist explains how the elusive lure of glamour affects our aspirations and everyday choices. “Glamour takes many different forms and has much more influence than we realize,” said Postrel. “The book gives people what I call ‘intellectual infrastructure.’ There are three essential elements in glamour — the promise of escape and transformation; grace, and mystery.

Here, Postrel talks about the concept and her new book.

WWD: Are people receptive to the book’s premise?
Virginia Postrel: I’ve been working on this book for a long time. I got the contract in 2007, then I got cancer — I’ve been officially cured since 2008 — but over that time I have had lots of conversations about glamour. People are really interested and they are especially interested in the idea that they are not susceptible to glamour. Men are always like, “Oh, glamour — that’s for my wife.” But then you start talking about the glamour of technology or the glamour of battle, which was one of the earliest terms of glamour. Or the glamour of the space program. Why do you have all these billionaires building their own space programs? When they were kids, going to the moon was the superglamorous thing to do. Now they want to make it come true. People who are interested in fashion or film, the traditional thing we think about love, the idea of kind of delving deeper.

WWD: Where did the term originate?
V.P.: The term glamour starts out as a Scottish word that literally means a magic spell. You cast a glamour on someone and they see something that wasn’t there. In the late 18th and early 19th centuries, it goes from Scottish to English and is particularly popularized by Sir Walter Scott, who again uses it in this literal magic sense. Over the course of the 19th century, it becomes more metaphorical. By the second half of the 19th century, you’re starting to see this phrase “the glamour of battle,” and it is a positive phrase. After World War I, “the glamour of battle” is a term that is still used, but the idea is we want to destroy that glamour so that people won’t want to go to war anymore. So in the Twenties pacifism is glamorous. In the 20th century, British aviators between the two world wars were actually called glamour boys. It’s a double-edged thing: They are on the cutting edge of technology; they’re brave; their outfits are kind of glamorous, but at the same time it’s kind a of a dig by the ground troops. “Oh, they’re the glamour boys, we’re the guys doing the real work.” What’s interesting about air travel today if you just see a plane taking off, it still has that feeling of escape and “Where are you going?”

WWD: What do you think is glamorous?
V.P.: I don’t consider being a writer glamorous because you never find your own life glamorous. I do have a kind of glamorous retreat fantasy, if I can go to the very glamorous place away from my life and just write. When I was finishing the manuscript, I did do it, but it wasn’t glamorous at all. I had a very limited budget, so I rented a cabin in the desert very far out in Southern California past 29 Pines in an area where there is nothing but sand and Marines where you go into town to go to Denny’s. It was not glamorous at all, but the glamorous version is that you go to Florence. And I actually have done that a little bit in Florence.

I certainly see fashions on the runway that I find glamorous. They are usually things I can never wear because I have the wrong body type or because I just have no occasion to [wear them]. There is a section in the book about the way the proliferation of these big cities changed glamour. The city has this kind of glamour as a destination — as in, I want to move to the city and be a writer or an artist. L.A. is the same way in that it has a kind of glamour that kind of pulls people in. But that’s not what it’s like to live there on a day-to-day basis. There are lots of tourists who come to New York and take home souvenirs that are not souvenirs of their trips. They’re souvenirs of the idea that inspired the trip in the first place — a photo of Audrey Hepburn from “Breakfast at Tiffany’s” or Marilyn Monroe on the subway grate.

WWD: As time has become such a commodity in people’s lives, how has that affected the meaning of glamour?
V.P.: In 1950, if you wanted the iconic image of female indulgence, it would be a woman in a mink. Today it’s a hot stone massage. It’s a totally different kind of glamour. First of all, it’s probably women buying them for themselves and not being given them by men. There’s a whole collection of desires that go with it — escaping from your life to the tranquility…the spa tub, the hot stone massage, the Louis Vuitton ad of Angelina Jolie sitting in a battered rowboat in a Cambodian swamp. She would have been just as beautiful if you had shown that picture to someone in 1960, but it would not have been glamorous. Today that represents tranquility, nature and the kinds of things that people kind of yearn for — the things that are different from their everyday lives, away from the hustle and bustle and the buzz of cell phones. It’s a different kind of glamour, but it’s the same thing. People want different kinds of lives and different things.

WWD: Did your illness change the course of the book?
V.P.: I’m not sure that cancer actually changes you. You are who you are. It certainly delayed the start of serious research, and that might have affected my thinking process in some unknown way. It probably deepened it because when you’re rushing to put things on paper or pixels you may not think as deeply.
When you’re sick, it’s nice to contemplate beautiful things. It seems like a very long time ago.