Exhibited in the museum space of the Shanghai K11 Art Mall, “Get a Life” celebrates not only Westwood’s creative chops but also her activism, particularly her environmental advocacy. 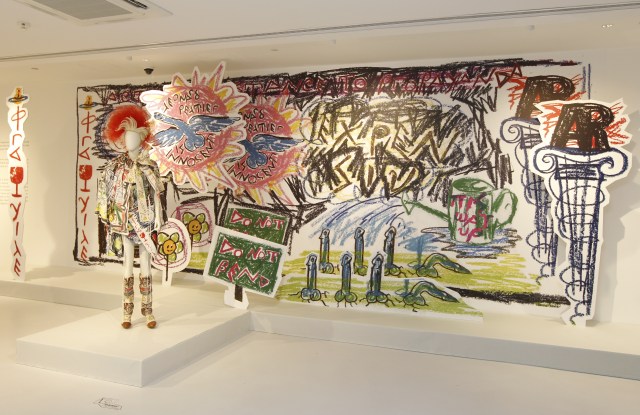 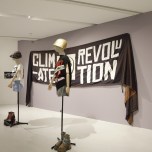 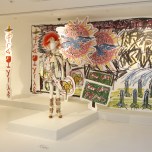 SHANGHAI–A new exhibition of fashion and art from British fashion icon Vivienne Westwood, entitled “Get a Life”, opened to the public here Tuesday.

Exhibited in the museum space of the Shanghai K11 Art Mall, “Get a Life” celebrates not only Westwood’s creative chops but also her activism, particularly her environmental advocacy.

Visitors first step into a room painted the maroon of a Buddhist monk’s robe to see lightboxes featuring photographer Juergen Teller’s campaign for Vivienne Westwood Gold Label fall 2017 collection, which was largely inspired by the adornments of Buddhist monks and nuns.

A dark room with big screen projects a BBC documentary about Westwood first screened in 2004. Further along, visitors can also see archival campaigns Westwood has undertaken with organizations such as the UN and Greenpeace on issues surrounding climate change and oceanic preservation.

Interspersed throughout are graphic drawings from Westwood, as well as clothes from the archives inspired by Westwood’s activism, and travels to threatened environs, including villages in South America.

“It’s all tied together,” said Alex Krenn, Vivienne Westwood designer and curator of “Get a Life”, speaking of the ways in which Westwood’s worldview and her “Gaia-focused philosophy” lead her activism, which leads her fashion, which circles back into her philosophy and activism again.

“This is the must important thing I hope we can bring out, these connections, these messages are so important,” he added.

The six-rooms of the “Get a Life” exhibit are running alongside and concurrently with a sister exhibition of six contemporary Chinese artists, including Wu Junyong, Yu Honglei and Nathan Zhou.

This exhibition of Chinese art is called “Monument of the Peach Blossom Valley”, which is also the name of a famous Chinese poem about a utopia untouched by humans. Designed by curator Song Zhenxi, the exhibition aims to present as a conversation between Chinese artists working across different artistic disciplines who embrace traditional Chinese cultural ideas about mother nature.