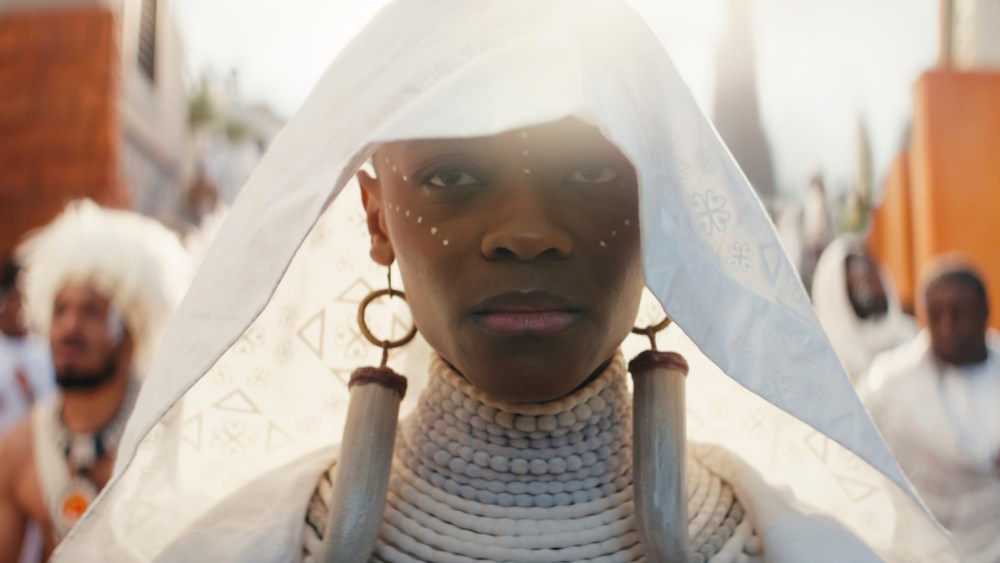 Watching the previews at the theater over the weekend, the next few months’ of superhero movies and fantasy films just seem to blur together.

Except for one: “Black Panther: Wakanda Forever.”

The sequel, which has been earning rave reviews and racking up record box receipts, is two hours and 40 minutes of pure, unforgettable eye candy, thanks to the aesthetic genius of director Ryan Coogler and Oscar-winning costume designer Ruth E. Carter.

The female-led story grapples with the death of the Black Panther and star Chadwick Boseman, the rise of queen Ramonda (Angela Bassett) and princess Shuri (Letitia Wright), and the threat from a new enemy Namor (the hunky Mexican actor Tenoch Huerta Mejía) from the underwater world of Talokan.

“It was about elevating,” said Carter of the project, which was four times the size of the original in terms of costumes, and involved working with African and Mesoamerican historians, sneaker giant Adidas, luxury designers Iris van Herpen, Mugler, Hervé Léger and more.

The film begins with a touching and beautiful life celebration for the Black Panther and Boseman, where everyone is dressed in ceremonial white.

“We had the warrior falls in BP1 where everyone wore traditional garb from their tribe. And since this was the procession for the funeral of Chad, we wanted to have the same traditional and Wakandan aesthetics but with everyone celebrating his life in pure white,” said Carter, who created jewelry, beading and printed fabrics inspired by the Maasai, Ndebele and other African tribes, in all white, hand-dyeing and painting hundreds of pieces. The grass skirts of the dancers, she improvised, by unraveling rope and creating raffia-like strands.

“The dresses show the power and vulnerability of women,” said Carter of the looks, topped off with stunning floral crowns. “They hold his casket up with showing a bare arm.” It’s powerful.

When the queen Ramonda (Bassett) visits the United Nations with a stern message for the global council, she stands out from all the usual business attire in a red-carpet worthy strapless gown anchored by a filigree gold collar, crown and arm bands. “I felt like how better than to show the strength of the queen who is now taking the throne, but to bear her arms, too?” said Carter, explaining that the dress was chosen by Coogler, who got a kick out of her glamorous entrance.

Another female force, princess Shuri (Wright) cultivates her power in the tech lab wearing more casual, but no less stylish clothing. Carter used an Hervé Léger jumpsuit in the first film that didn’t get much screen time, so she returned to the brand again to work on a chic, twist-front gray ribbed knit set for the leader-in-waiting, and another burgundy set with metal lacings and fastenings on the sleeves worn by the story’s science prodigy Riri, or Ironheart (Dominique Thorne), who has invented a machine that can detect the all-important resource vibranium.

When Shuri and Okoye (Danai Gurira) travel to the U.S. to find Riri, they try to blend in. Shuri wears a blue tracksuit, custom made by Carter and Adidas, with a swing back detail on the jacket that catches air like a cape when she speeds off on a motorcycle.

Carter worked with Adidas’ S.E.E.D. program of female and BIPOC designers [Black, Indigenous and people of color] on several custom looks for the film, as well as footwear, including high-top sneakers with negative soles. Versions of some of the pieces are part of the Adidas and Marvel Studios’ Wakanda Forever Collection.

The film also veers into high fashion, when Okoye wears a black Mugler power-shoulder jacket with cutouts, with a custom Adidas bodysuit printed with Wakanda symbols. Look closely and you will spot Gurira’s own pair of Louis Vuitton sunglasses in one scene. “She was looking fabulous, so why not?” Carter said of including the glasses she was wearing on set to stay incognito while filming on the Boston streets.

To develop costumes for the underwater world of Talokan, Carter tapped Iris van Herpen “who does such a good job of bringing inspiration from the ocean into her couture line,” she said of the Dutch designer, who in 2011 created a breakthrough collection titled “Crystallization,” with one of the first 3D-printed dresses, inspired by a splash of water.

Van Herpen made the beaded gown Shuri wears when she first visits Namor’s home. “It’s a sheer white dress with this high neck and all these clay beads. It’s beautiful but it’s nontraditional for Iris,” said Carter, explaining that the designer also made a ceremonial dress for Namora (Mabel Cadena) with Mayan mosaic and silk organza leaves, but that it was too delicate to be submerged and had to be remade for filming underwater.

The Talokanil were influenced by the Aztec and Mayan civilizations, mixed with an underwater Atlantis-like world, using as fish bones and jade, kelp and feathers as costume materials.

“It was a huge undertaking. We introduced nine new superheroes and their military factions. We built three worlds and we revisited Wakanda and redid it so that it could have its own water element. Ramonda had four new crowns,” said Carter, adding that Marvel will put four of the “Wakanda Forever” costumes into her traveling exhibition, “Ruth E. Carter: Afrofuturism in Costume Design, at the Museum of Pop Culture in Seattle now, and due to travel to Chicago next. “There’s so much detail that you cannot see on camera,” she said.

Next up, the designer is working on Marvel’s “Blade” with Mahershala Ali.

“I like to bring in fashion in as much as I can because it is also storytelling to me…and the ability to have these craftspeople that do amazing shapes and couture, I love that,” she said of her process, adding that she recently had a zoom call with Rick Owens, who ultimately turned down her idea of collaborating. “You know, you win some and you lose some.”