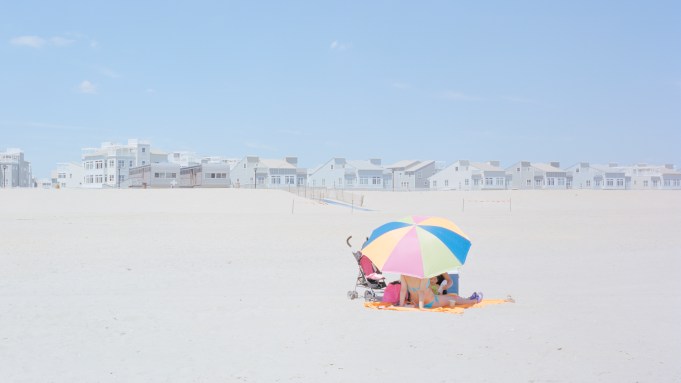 While popular New York beaches fill up with activity on the weekends, the beaches of photographer Ward Roberts’ “Flotsam” series paint a different scenario. Taken between 2014 and 2017 in the aftermath of Hurricane Sandy, his photographs capture near-empty stretches of Far Rockaway. Pastel-tinged and set against clear, sunny blue skies, the softness of the images is juxtaposed by urban relics looming in the background — high-rises, cranes, construction — creating a sense of unease against the idyllic setting. The New York-based photographer is releasing the photographs in the form of a salmon-pink canvas photo book, out late this month and printed in a first edition of 850. While Berlin-based creative Kai von Rabenau penned an introduction to the book, the individual photos are presented without any text, adding to the evocative nature of the series.

Below, an excerpt from the book’s introduction by Kai von Rabenau:

1. We all know this: Repeat a word or a phrase often enough, listen to it over and over in your head, and it will soon start losing its meaning, turning unfamiliar, comic even, and, eventually, downright surreal. Ward Roberts’ series Flotsam grows on you in a similar fashion.

2. At first sight, the images seem innocent enough: a lonely figure on a vast expanse of beach, nondescript suburbia in the distance, infinite blue skies. A picture-perfect moment, carefully composed, in beautiful sun-washed colors. Sweltering heat, a sheltered moment of peace and quiet, the ocean behind you.

It is all so clear.

3. But look closely, carefully enough, and minute details, moments, incongruities emerge. Nuances, really, but with so little to hold onto, they gain weight: A bright green house amidst a row of identical white-picket-fence homes. A parachute hanging silently in the sky. Seagulls waiting in the distance like vultures. Construction tubes that look like grotesque giant cigarettes. Questions drift to the surface, shadows of associations and words more complicated. What felt strangely familiar at first now becomes slightly unsettling.

4. “Papa, papa, there is a cowboy in the sky!” My young daughter yelling at me on our bicycle. “What?” “In the sky, a cowboy!” “In the clouds?” “YES! In the clouds!” There are hardly any clouds in Roberts’ images. Just a wash of blue sky, so deep and impenetrable against the white sand it appears flat, unreal, oppressive almost.

5. The lonely figure, a classic, exhausted motif. Here, sunbathing, exposed, their isolation in this near-perfect setting takes on a curious air of sadness: There must be something wrong with an urban beach in the bright midday sun without any people. There is no sound within these images.

6. Looking closer still; the lonely figure, sunbathing, shed of most clothes, which always makes for a ridiculous moment. Identities fading with the distance, blissfully equal under the sun. It could be you or me. Apparently unaware of our surroundings, of life around us, or of our picture being taken, for that matter. There, and yet not there.

7. It is what we dream of, so many times, and yet, dreams come true at a price. In one image, the shadow of an aeroplane glides across the sand, looming, threatening somehow. The motionless sun reveler entirely oblivious, it seems. There is a cowboy in the sky. But at some point, we would rather not know, would rather close our eyes, as long as someone else is paying the bill, as long as our own lonely little lives are secure.

8. On a side note: these images, so perfectly composed, so immaculately framed — these are not stolen moments, they are slow, carefully arranged compositions. Someone took time and dedication to take these pictures. They have the intention and intensity of paintings. It is hard to tell: Are they staged? Are they ‘real’? But then again, part of the appeal lies in not knowing.

Excerpt from the introduction text by Kai Von Rabenau of Flotsam by Ward Roberts (Atelier éditions). Copyright © 2017 and reprinted by permission.