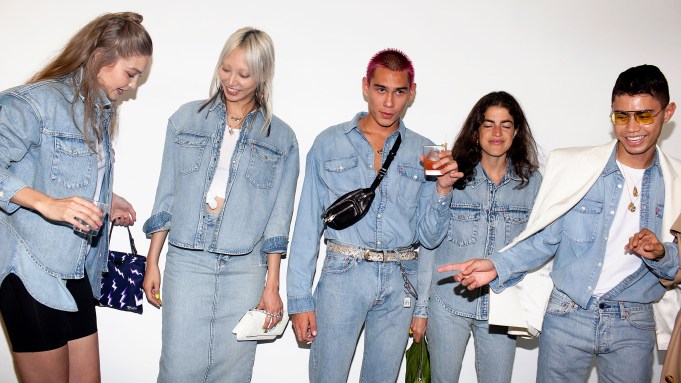 Wardrobe.NYC wants to keep things simple. The direct-to-consumer luxury brand, founded by Christine Centenera and Josh Goot in December 2017, offers up four- and eight-piece capsule launches of basics — tailored, sport and street — and now with their fourth capsule launch they’ve opened up a spot for denim, also through a new collaboration with Levi’s.

On Wednesday night, the brand toasted the launch at its SoHo boutique with guests including Gigi Hadid, Leandra Medine, Evan Mock, Georgia Fowler, Phoebe Tonkin and more, who came dressed in the basic wares.

“Look, we got really lucky; Christine had an existing relationship with Levi’s,” said Goot, sipping an aloe cocktail accented by chamomile flowers. “We went and spoke to them, and they loved what we were doing at the same time, and we were able to work together.”

Luck and connections can certainly play a role in success, but the duo also focuses on honing in on a very specific concept and keeping everything else pared down. In their boutique, the clothes are displayed in a bare-bones space devoid of signage; there’s little to distract from the actual product. Before the end of the year, the pair hopes to add another collection or two to the mix.

“It’s been pretty wild, and now what the business is trying to do is simplify and elevate: those are the two words that I’m really holding onto right now,” adds Goot. “And that’s not just in design, but every element of the business, from user experience to the logistics, human resources, structure.”

Centenera, donning a beige trench over her denim jacket, nodded. “Keep it simple,” said the stylist. “Things don’t need to be complicated. There’s so much going on in everyone’s lives.”

But there’s always time to stop by for a quick congratulatory drink.