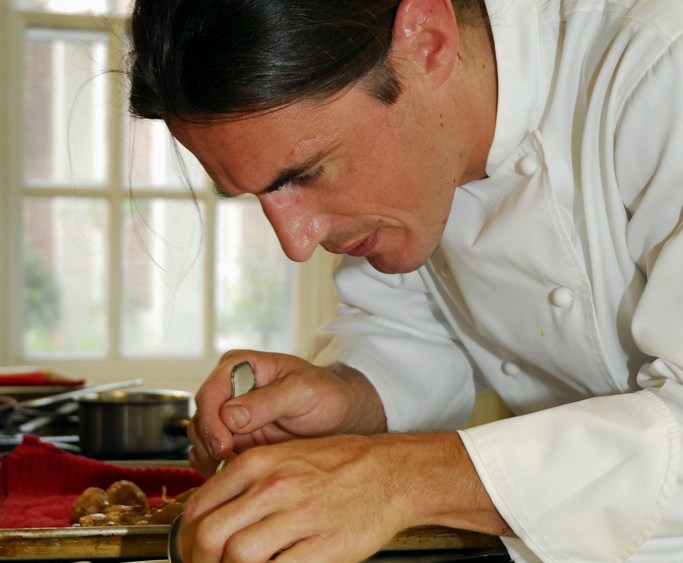 WASHINGTON — Savvy Washington ambassadors are smart to snag sharp, young White House and congressional aides for a party when they’re still green enough to feel grateful. What better time than last week, with everyone off to London for the Olympics or out on the campaign trail chasing after Barack Obama and Mitt Romney?

Among the smartest is British Ambassador Sir Peter Westmacott and his wife, Lady Susan, who hosted their own Olympics party Friday with help from NBC Universal, which has been broadcasting the Games since 1988.

The party also gave the ambassador a chance to show off his own rising star: his chef, Craig Harnden.

“With so many people away in London, it’s a party for rising stars in Washington across the board — culture, local sports, the younger set,” says the 37-year-old Harnden.

Harnden knows how to look after demanding bosses — from ambassadors to hotel chefs to business magnates. The day he arrived at the embassy 18 months ago, succeeding the chef of 20 years, he went right to work, helping to prepare the morning reception to celebrate the wedding of Prince William and Catherine Middleton. Fifteen years earlier, at the age of 21, he joined the team at Homewood Park hotel in Bath, England. “Gary Jones turned the kitchen around and we got a Michelin star in 10 months,” recalls Harnden. Five years ago, when he heard Virgin group business magnate Richard Branson was looking for a new chef for his Necker Island retreat, he turned to Jones, one of Branson’s first resident chefs, to help him get it.

“I wanted the Necker job,’’ Harnden says. “It’s a private island, a resort with accommodations for 30 guests and a staff of 60, including a water sports team and spa girls. I loved it.’’

It is also Branson’s family home. “He doesn’t think about food,” admits Harnden. “For him, food is fuel. He likes simple family foods — shepherd’s pie, fish and chips, steak and mash. But if anything is wrong, he knows about it.”

By the time the embassy job opened up, Harnden had added a three-month stint at the restaurant mecca French Laundry in Yountville, Calif., with chef Thomas Keller to his résumé, along with two weeks in Manhattan working with molecular gastronomy chef Wylie Dufresne of the wd-50 restaurant.

Like Keller and Dufresne, Harnden is a stickler for the tiniest detail. He has most recently been up to his elbows in sugar, having spent two weeks in June and 10 attempts mastering the art of pastillage to make a five-foot high replica of the Queen’s crown resting on a satin pillow for the party at the embassy to celebrate her Diamond Jubilee. “I finally got it,” he says, adding, “Two days before the event.”

Clearly it’s a London cake year: for Friday’s party, Harnden created an Olympian cake set on a rectangular base before a London cityscape that was made entirely of spun sugar.

Asked his biggest challenge cooking for Westmacott, who spent five years in Paris before arriving in Washington in January, Harnden says simply, “To keep him interested.

“I wasn’t aware English cooking had a bad reputation until I came to the U.S.,” says Harnden, who loves to experiment. Not all of them work out, though. One creation — a lobster corn dog canopy based on the classic Scotch egg involved fresh lobster meat with a quail egg in middle. “It was a lot of work, and it never appeared back on the menu,” he says.

For a reception for 100, Harnden typically serves meat, fish and vegetarian hors d’oeuvres. And these aren’t made in the morning and kept chilled and then microwaved right before being served on silver platters. They are all made up fresh in the kitchen as they are served. “We want to stand out from the rest of the embassies,” Harnden says proudly. So for his beef and Yorkshire pudding canapé, he explains, “the beef has to be perfectly cooked and the Yorkshire pudding perfectly crispy.”

His favorite kitchen gadgets include a Pacojet titanium blade machine for making ice cream, a dehydrator for perfect crystalized ginger slices and a water bath for caramelizing fruit. But for all his up-to-the-minute expertise, his signature dish is his steamed sponge cake or, as the English call it, sponge pudding.

“I started when I was five with my grandfather’s big, black leather bound Good Housekeepers cookbook making Bakewell tart and lemon meringue pie,” says Harnden, who grew up in Bristol. “My mum never told me anything I made was bad. About the worst she ever called anything was ‘edible.’”

When he’s not cooking for the ambassador or his guests, Harnden invites embassy staff into his kitchen for classes using fresh spices and vegetables from the embassy’s garden. For his last class he made three kinds of pasta — linguine, ravioli and agnolotti that he likes to stuff with a puree of sweet corn, an American specialty.

Whoever he’s cooking for, Harden knows the rules. “Whether you’re at a resort in the British Virgin Islands where guests are paying exorbitant amounts or here at the embassy, there is no second best,” he says. “You get it right or you go home.”