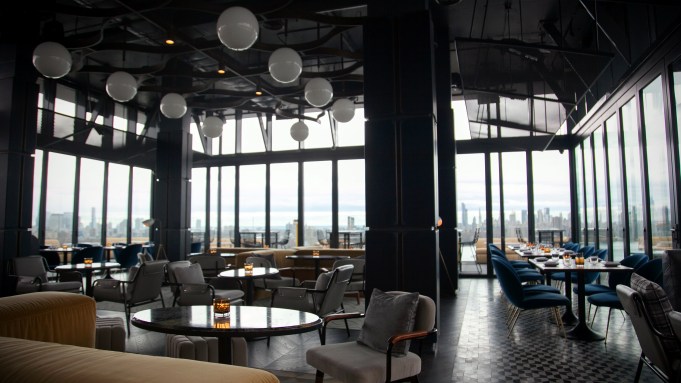 “When we used to walk from the L [train] to come over here, there were zero people. No hip restaurants,” Andrew Carmellini says, sitting inside Westlight, the 22nd-floor bar he and his NoHo Hospitality partners Luke Ostrom and Josh Pickard are opening in Williamsburg on Sept. 9. The venture into the neighborhood marks their first departure from Manhattan, and, as any longtime Brooklyn resident knows, the scene has undergone quite the dramatic change. “It went from pre-hipster to hipster, and it’s gone,” Carmellini says. In Ostrom’s words, “it’s post-hipster now.”

The group was largely drawn to the location, which is inside the newly opened William Vale Hotel, due to the sweeping view. “It was a big part of what got us really excited about doing a venue on this level, because you’re kind of, no matter what, just blown away by the view instantaneously,” Ostrom says. “Nighttime is incredible.”

The trio, who are behind some of Manhattan’s most sought-after spots like Locanda Verde, Little Park, Lafayette and The Dutch, plan to stick to their signature approach to hospitality for Westlight. “We have to shake some good drinks and cook some good food, and give some good hospitality,” Carmellini says. “Just let people enjoy the environment.”

While the approach to food and drink remains consistent with their Manhattan properties, they plan to introduce more cultural, community-oriented programming in the bar. “We’ve incorporated a cultural programming element to this property and the director of cultural programming is going to be spearheading with us to try to put together, besides food and beverage events,” Ostrom says. That will include things like yoga classes on their 23rd-floor open outdoor space, as well as author readings, artists’ installations, movie nights, dance performances and concerts.

“[It’s] not about making money,” Carmellini says. “This is more about benefitting the community culture.”

The drinks, “very adult kind of beverages,” Carmellini says, are crafted by Anne Robinson, and will be paired with “New York street food — big flavors, lots of variety” in the form of things like shrimp dumplings. All food and drink, it’s assumed, are designed to pair well with the vast views of Manhattan’s skyline.

Says Ostrom, “the staff probably gets distracted by the view.”