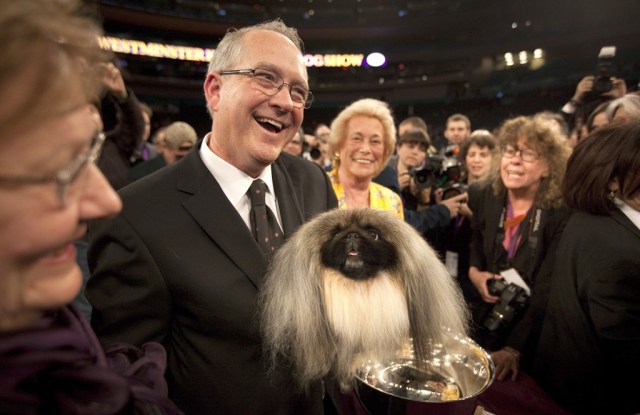 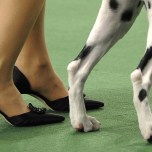 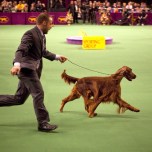 Beams of light cut through the shadows at Madison Square Garden in Manhattan Tuesday night, as seven Best in Show contenders trotted out individually onstage.

For the contestants, everything had led up to this moment — and there would be only one winner. It was indeed the final round of judgment at the 136th annual Westminster Kennel Club Dog Show, and Pekingese Palacegarden Malachy, a gray ball of fluff, would walk away as top dog.

The saying in the Olympics is that no one remembers who won silver or bronze, and the same seems true in the dog world. So who were the runners-up? Here’s a recap:

• Emily, a sleek Irish setter with a lustrous auburn mane that reportedly gave birth to 15 pups in May. How’s that for a working mom?

• Ian, a determined and athletic dalmatian.

But it was Palacegarden Malachy who was most feared — by the dogs and their handlers. While all the other dogs strode energetically into the center ring, Malachy toddled to his podium, looking more like a mini Cousin Itt from “The Addams Family” before his hormones kicked in than the front-runner. But don’t let looks deceive you. Backstage, handlers of larger, more statuesque dogs acknowledged that the “Peke’s the one to beat.”

One owner summed up why: “You have to have the personality to be a star, and he’s a star.”

Judge Cindy Vogels, who was sequestered for two days prior to the competition, seemed to know this innately, too. As she studied the dog, little Malachy looked up at her with his large, dark eyes that sparkled like crushed gems.

It was over. Not only was the judge smitten, but so, too, was the crowd. Malachy was crowned victor and was propped up on the podium, posing with his perfectly coiffed mane. He definitely had a twinkle in his eye.

But now that the Westminster show is done and dusted, the losing dogs won’t have much time to go home and lick their wounds.

Just as the fashion world will take their collections to the runways of London, Milan and Paris, the dogs will hit up the next big competitions taking place in the decidedly less glamorous cities of Greenville, S.C., and Denver. Then again, some of them might just go home and lick their wounds — literally.