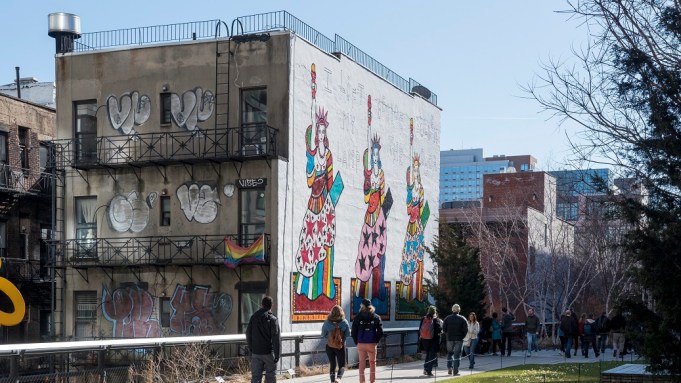 Although it’s away from most of the fashion week fray, the Nordstrom men’s store is worth a visit. This 47,000-square-foot, three-level space is the Seattle-based retailer’s first full-price flagship in Manhattan. Buyers have made sure the merchandise satisfies a New York City consumer and it’s heavily skewed toward designer and contemporary items from newer brands, including Jack Erwin, Cole Haan NYCH, and Strong Suit by Ilaria Urbinati. Luxury brands including Balenciaga, Calvin Klein, Dior, Valentino, Christian Louboutin and Comme des Garçons, all of which have distinct shops, are also present. For views of Columbus Circle, have a bite at the store’s clubhouse/restaurant concept.

Founded by Santino LoConte, Reign is one of the newer men’s wear boutiques in Manhattan. The 1,600-square-foot store in the Meatpacking District is stocked with brands including R13, Stone Island, Kappa, Alexander Wang, Martine Rose, Rick Owens and Juun.J, which isn’t being sold at any other retailer in New York. On the footwear side, LoConte has selected Suicoke, Casbia, New Balance, Hender Scheme and Puma Select for the space. The shop is minimal, with a 12-foot circular skylight and a courtyard. LoConte recently launched a Deadstock program that will reissue popular sneakers and sell them at original retail prices.

Nearby is Sneakersnstuff, the specialty sneaker chain that has opened its first New York location. Designed by Jenny Askenfors of Bofink Design Studio, the store is filled with some of the newest releases from Nike, Adidas, Reebok and Puma, along with a small collection of apparel from designers including Alexander Wang, Champion and Stussy. The shop also features a bar in the basement.

Stationed inside the lobby of the Swiss Institute’s new Annabelle Selldorf-designed building in the East Village is Printed Matter, a nonprofit that sells artists’ books, ’zines and posters. This is its first satellite location for Printed Matter, which operates two popular book fairs in New York and Los Angeles and has had a store in Chelsea for the past four decades. While there, peruse an exhibit or head to the rooftop garden. Note that the store and museum are closed on Mondays and Tuesdays.

Ruben Aronov, a former barber at Freemans Sporting Club, has opened his own barbershop called Matter of Instinct, or Moi, which means “me” in French and “mine” in Russian. Aronov, who is Russian and moved to the U.S. as a child, helped manage and start F.S.C. Barber, and wanted to create an environment that’s less performative and more welcoming. That resulted in a more spacious shop that’s decorated with original Belmont chairs from the Fifties and features stations made from 200-year-old reclaimed spruce and pine. The retail area in the front of the shop carries grooming products from brands including Malin and Goetz, Baxter of California, Marvis toothpaste and Mr. Natty.

Gitano, the Tulum hotspot, has set up a seasonal restaurant in New York at Hudson Square. Founder and principal owner of Grupo Gitano, James Gardner, wanted to re-create the lush landscapes of Tulum in SoHo, so the 23,000-square-foot lot is filled with palm trees and plants. Chef Yvan Lemoine serves Mexican dishes ranging from ceviche and grilled avocado to slow-roasted pork belly and grilled rib eye. The space also features an urban farm, boutique, cafe and an area for meditation. The seasonal restaurant will be open through October before it moves to another destination.

Rosemary’s, an Italian restaurant that opened in the West Village five years ago that touts a rooftop garden, has expanded and introduced a pizzeria. Helmed by chef Wade Moises, Rosemary’s Pizza serves 11-inch Neapolitan pies that are a canvas for local ingredients sourced from Rosemary’s Farm in the Hudson Valley and its aforementioned rooftop garden.

Mah-Ze-Dahr Bakery, which was founded by Umber Ahmad and is backed by Tom Colicchio, isn’t new, but last summer it debuted distinct soft-serve ice cream flavors and they’ve brought them back this season. They are currently serving a strawberry and mascarpone flavor that comes in a cup or can be served in homemade waffle cones with toppings such as vanilla meringue drops, dark chocolate brownie bites and candied hazelnuts.

Broken Shaker at the Freehand Hotel

For 360-views of the city and James Beard Award-nominated drinks, try the Broken Shaker, which is situated on the 18th floor of the recently opened Freehand Hotel in Flatiron. Co-owners Gabriel Orta and Elad Zvi, who operate Broken Shaker bars in Miami, Chicago and Los Angeles, wanted to create a fun and accessible atmosphere — there’s no bottle service — and quirky drinks include their signature Cocoa Puff Old Fashioned that’s made from cereal-infused bourbon and rye stirred with Demerara and chocolate bitters. Chef Jimmy Lebron’s menu features an array of dishes imbued with Caribbean and Middle Eastern flavors.

Images from Malick Sidibé, the late photographer known for his black and white images of Mali youth during the Fifties, Sixties and Seventies, are on view at the Jack Shainman Gallery.

Each season the Highline, the elevated park that runs along the west side of Manhattan, commissions new art. Currently on display is Agora, a group exhibition that examines art’s impact on public spaces and features works from artists including Maria Thereza Alves, Andrea Bowers and Naufus Ramirez-Figueroa. British sculptor Phyllida Barlow has created a piece titled “prop,” which is on view near the 16th Street entrance. Dorothy Iannone, a Berlin-based artist, has created a mural near the 22nd Street entrance that features three vibrant Statues of Liberty. Titled “I Lift My Lamp Beside the Golden Door,” which is the final line from Emma Lazarus’ poem “The New Colossus,” the mural speaks to the promise of immigrating to Liberty Island and finding freedom.

From Gansevoort Street in the Meatpacking District to West 34th Street, between 10th and 11th Avenues