What’s New in L.A.: Restaurants, Hotels, Shops and Spas to Check Out During Oscars, Frieze

Bob Melet has moved his Melet Mercantile vintage emporium to Los Angeles, along with a full-scale events and production shop.

Whether you are traveling to Los Angeles for the Tom Ford runway show, Oscars weekend, the Frieze art fair or just because, there is a lot of newness to see and experience. Here, broken up by neighborhood, are some suggestions for how to spend your time.

The new Kelly Wearstler-designed Proper Hotel (700 Wilshire Boulevard, Santa Monica) is a stylish must-see. The L.A. interior designer transformed a Twenties Spanish Colonial Revival office building into the 271-room hotel, which has a uniquely minimalist, earthy and textured look that makes one want to stay awhile, perhaps to enjoy a mezcal tasting at the rooftop bar? There are beach cruisers available on-site for touring the neighborhood. 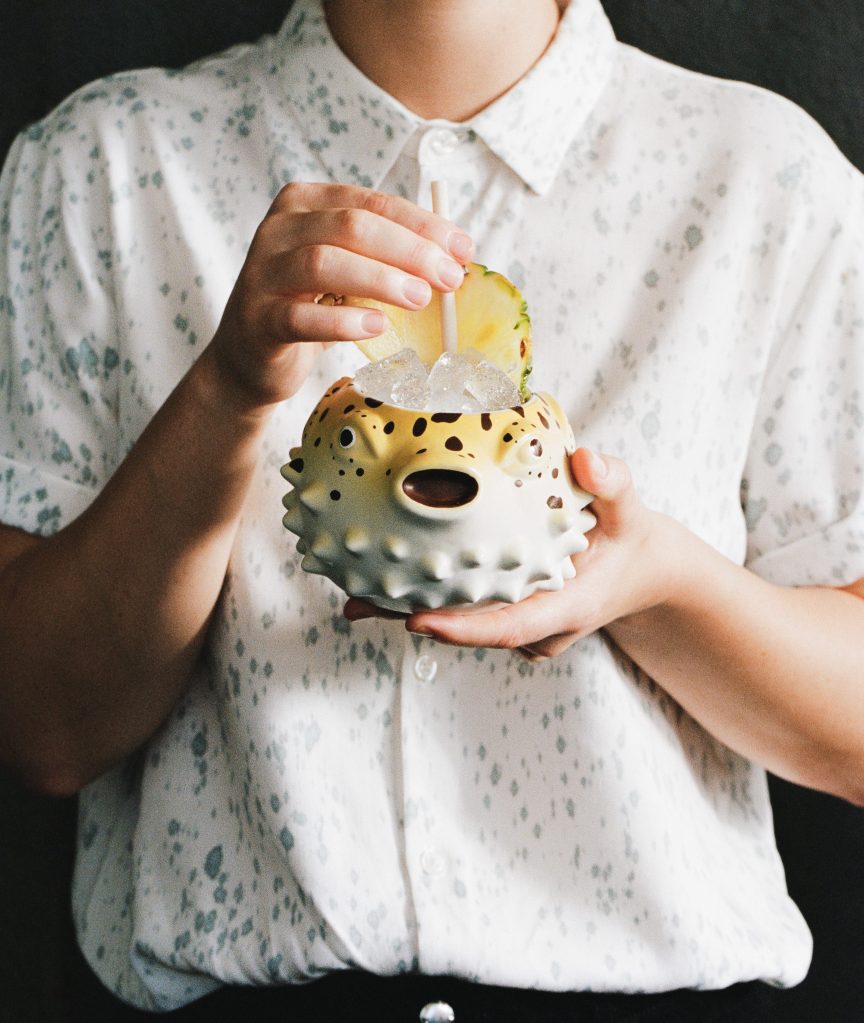 The hotel’s restaurant is the buzzy Onda, which opened in October. It’s a collaboration between Jessica Koslow, chef of Eastside ricotta toast hot spot Sqirl, and Mexico City chef Gabriela Cámara of Contramar. On the menu? “Mexican based on what’s in season with Sqirl-y touches,” said Koslow, who has a way with fermentation, which she’s incorporated into the guacamole with fermented jalapeños. The Fish Hiding in Kelp features kelp harvested from Santa Barbara and sardines from Malibu, done fritto misto style in an ode to Camara’s Italian roots, but the Koji-marinated Satsuma Sweet Potato with salsa macha, house-made crema and heirloom corn tortillas is the one that’s hard to get out of one’s head. On the cocktail (or maybe dessert?) menu, the Mole + Butter, served in a ceramic puffer fish sourced from the now-shuttered tiki haunt Trader Vic’s, with 54-ingredient mole, Barbados rum, cacao and morenita sherry, is a tasty sip. Reservations recommended, but there’s also a bar that’s seated first-come, first-serve. Onda will start serving breakfast next week, including a crispy rice salad with adobo.

Closer to the water, with expansive views of the Pacific Ocean, Oceana (849 Ocean Avenue, Santa Monica) is fresh off an eight-month renovation by interior designer Anna Busta. The 70-suite seaside retreat feels like a fully staffed beach house, with a private restaurant serving fare sourced from the local farmer’s market, Loro Piana bedding, Frette linens and Bottega Veneta amenities. (It’s great for a weekend, but would also be a good spot for a brand looking to take over a whole hotel). Each room has its own entry nook swing, and bookcases full of reading material to take to the beach.

Since opening late last year, Ian Schrager’s The West Hollywood Edition (9040 Sunset Boulevard, West Hollywood) has been a magnet for bold-facers including Demi Moore, Janelle Monáe, RuPaul, Jeremy Scott, Rick Owens and more. Seeing Chaka Khan perform in the subterranean club inspired designer Scott Studenberg to plan his fall 2020 Baja East fashion show in the venue. Don’t miss Sterling Ruby’s “The Scale” mobile in the lobby, and Ardor restaurant, where chef John Fraser serves vegetable-forward cuisine, including yummy carrot bolognese. The Roof, with views of the city, is a scene the likes of which L.A. hasn’t seen since Schrager’s Sky Bar opened at the Mondrian. In other words, there will be a line. Take refuge in the spa, where there’s a CBD facial with California-based Mowellens products. 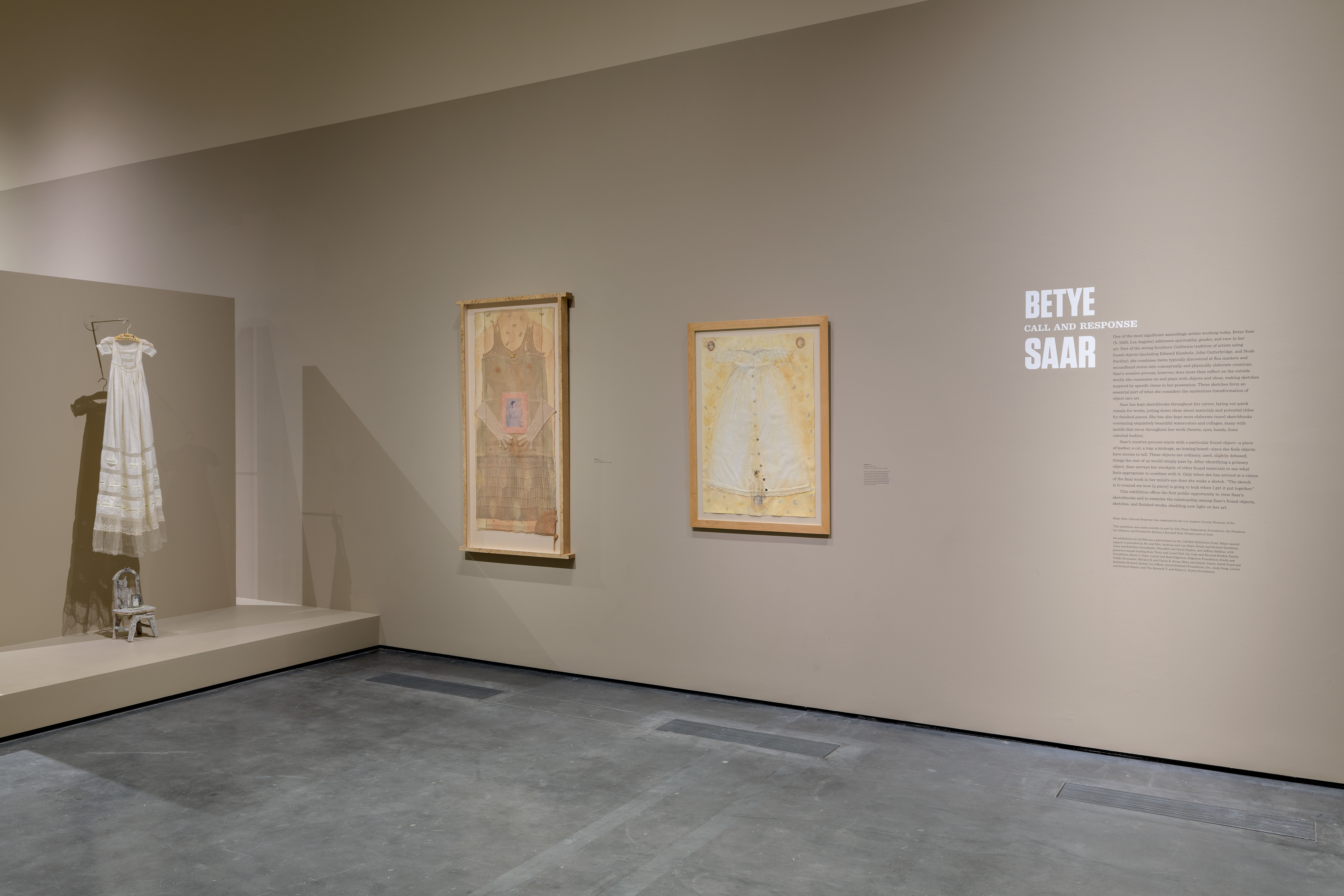 For an art fix, the Los Angeles County Museum of Art’s “Betye Saar: Call and Response” (until April 5 at 5905 Wilshire Boulevard, Los Angeles) is a wonderful companion to last year’s Museum of Modern Art show, focusing on the last 25 years of work by the 93-year-old L.A. artist, who was honored at last year’s Gucci-sponsored LACMA Art + Film gala. The exhibition is small but mighty, the first to feature Saar’s charming sketchbooks alongside her intimate yet powerful mixed-media assemblage works, some of which incorporate clothing, touching on themes of racism, mysticism and her own personal history.

Fashion hubs Barneys New York in Beverly Hills and Opening Ceremony on La Cienega may be on their way out, but The Webster (8500 Beverly Boulevard, Los Angeles) is just moving in with its seventh location. Located at the Beverly Center, with a street-level entrance facing San Vicente Boulevard, the 11,000-square-foot pink concrete building was designed by acclaimed British architect Sir David Adjaye, whose projects include the Smithsonian’s National Museum of African-American History and Culture in Washington, D.C., and homes for Juergen Teller, Ewan McGregor and the late Alexander McQueen. This marks Adjaye’s first project in California and he will appear at a Frieze-related event in the store on Feb. 12. Inside is an edgy mix of designers for men and women, including Bottega Veneta, Anita Ko, Co, Dior, Khaite, Loewe, Gucci, Versace, Rhude, Rodarte and more.

For a workout, head to Aarmy (8599 Santa Monica Boulevard, West Hollywood), the fitness pop-up from brand guru Trey Laird and celeb-loved trainers Angela Davis and Akin Akman, which drew no less than Beyoncé, Jay-Z, Usher and Iman on opening weekend. The 8,000-square-foot space, open until at least the end of the year while a permanent location is found, has a minimalist look designed by Alvarez & Vincent Architects, the design pioneers behind Nike’s L.A. special events space Room 72. In addition to two training rooms, one for boot camp and another 55-bike cycling room, it features an outdoor terrace and retail space selling such limited-edition merchandise as Fear of God x Aarmy hoodies and T-shirts. 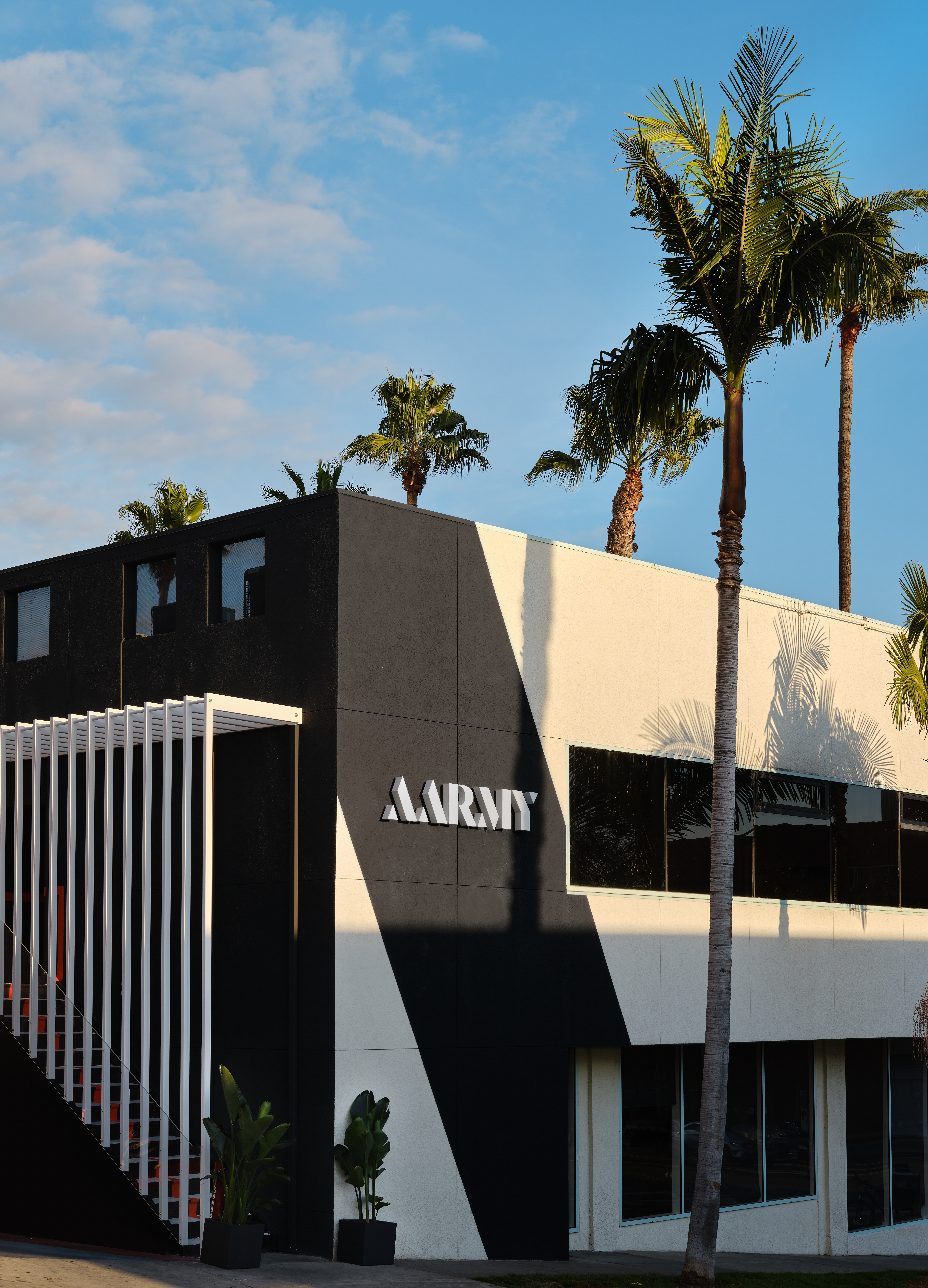 Rick Owens may have been onto something in 2015 when he opened his L.A. boutique in what was then a retail wasteland on La Brea Avenue just south of Santa Monica Boulevard. Now there are several new spots in the area that you can tackle in one trip. Start just south of Melrose at the blush pink Sonia Boyajian Jewelry (357 North La Brea, Los Angeles) boutique designed by Studio Shamshiri and inspired by Georgia O’Keeffe’s home and studio in Abiquiu, New Mexico, with soft, curving lines; low, built-in couches and a kiva-like fireplace. L.A. designer Boyajian is known for her artful jewelry, including funny face ceramic brooches, carefully balanced wire and stone earrings, and organic-looking pearls. For the new shop, she made her first large-scale mobile, light fixtures and jewelry cases inspired by Donald Judd’s sculptures at the Chinati Foundation in Marfa, Tex. In addition to her own work, she carries pieces by other designers who focus on the handmade, including knitwear designer Sofio Gongli from Tbilisi, Georgia. Coming from Boyajian in time for Frieze are home accessories, including bowls and objets. 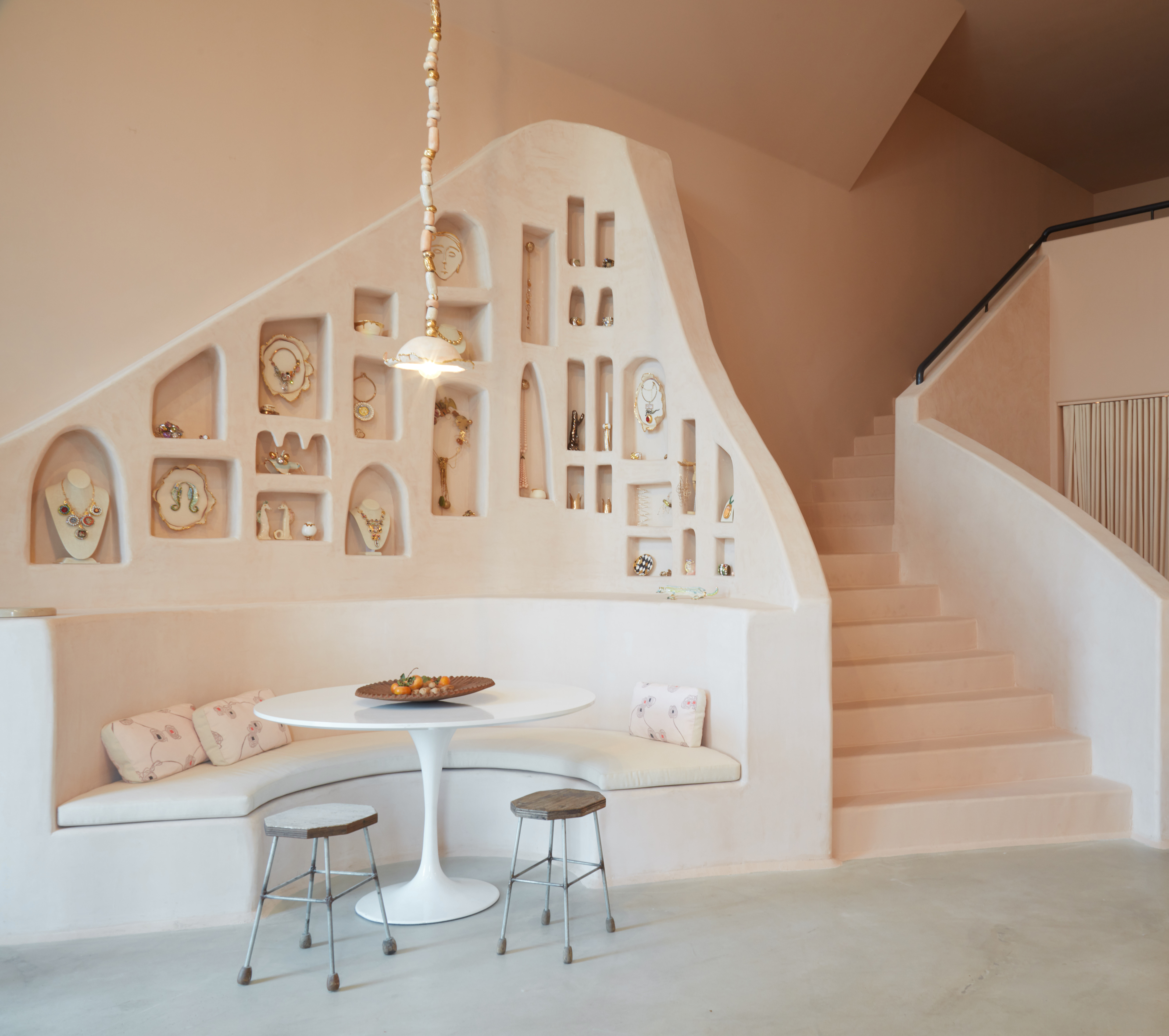 For an intimate new Hollywood hotel option, The Prospect (1850 North Cherokee, Los Angeles) is the latest endeavor from star interior designer Martyn Lawrence Bullard, who counts Tommy Hilfiger, Kylie Jenner and Cher as clients. Located in Whitley Heights, once home to James Dean and Jean Harlow, the Hollywood Regency building dates back to 1939, and Lawrence has restored it with his exotica style, lots of black-and-white tile, Moroccan-inspired archways and palm flourishes. Bonus: The Prospect has a partnership with NeueHouse, so guests can access the nearby members’ club and workspace during their stay. 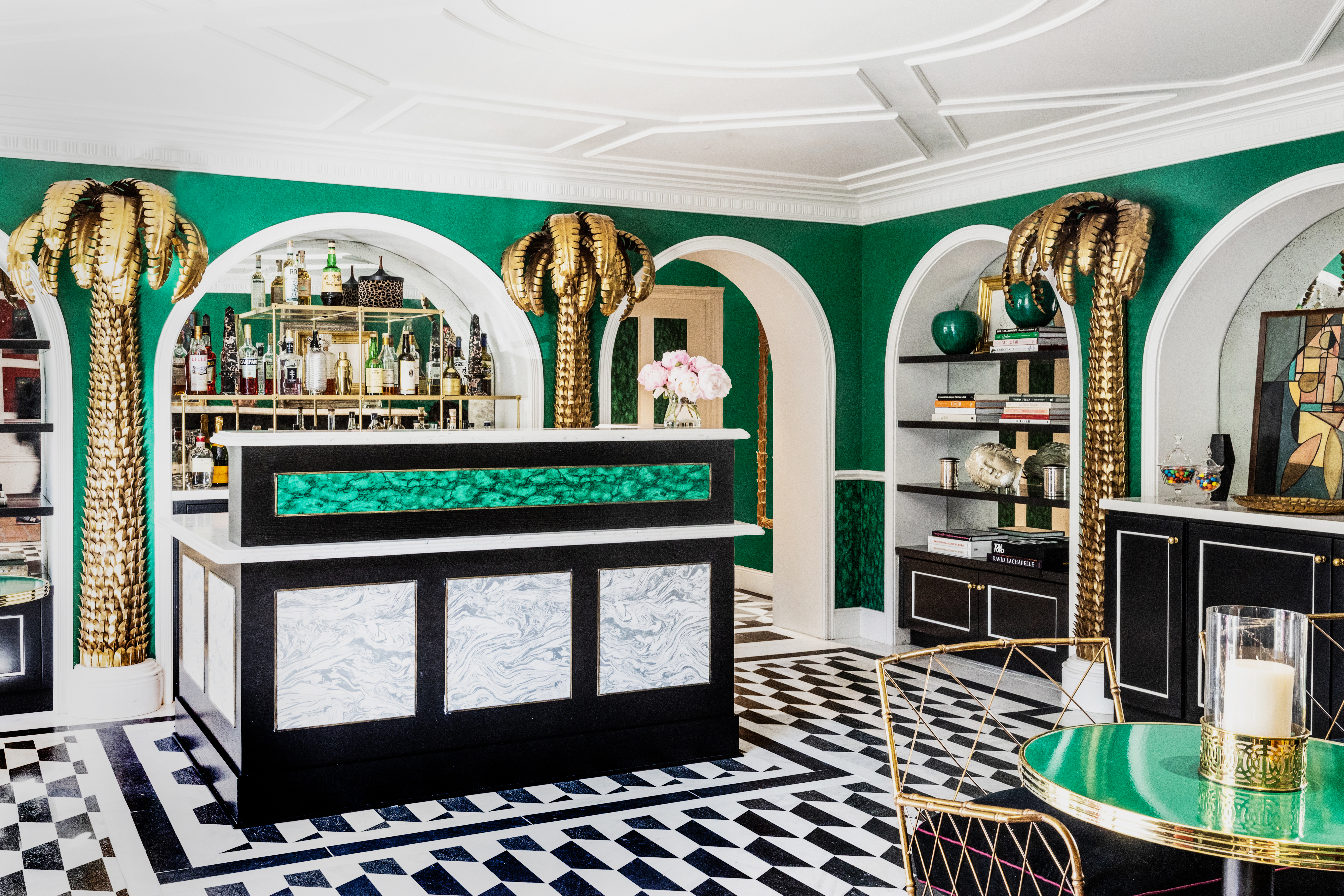 Maybe you’ve got a meeting at Nike, Beats, 100 Thieves or Apple, which seems to have bought up most of Culver City…or maybe you want to avoid the crowds hiking Runyon and try Baldwin Hills Scenic Overlook instead. After a rice porridge breakfast at Destroyer (3578 Hayden Avenue, Culver City) you can hit shopping destination Platform and check out Lifehood (8810 Washington Boulevard, Culver City), the new massage concept with a mindfulness twist from Amy Krofchick, creator of L.A. efficient-calm massage chain The Now. With a Love It Forward business model, Lifehood guests can purchase a discounted massage for someone they want to celebrate, in addition to their own. The Brigette Romanek-designed space is minimal yet warm, the massage therapists are dressed in uniforms by L.A.-based The Great and RTH, and add-ons include CBD gumdrops or an immersive virtual reality tour of California. “It’s about love, healing. It’s about gratitude,” said Krofchick. 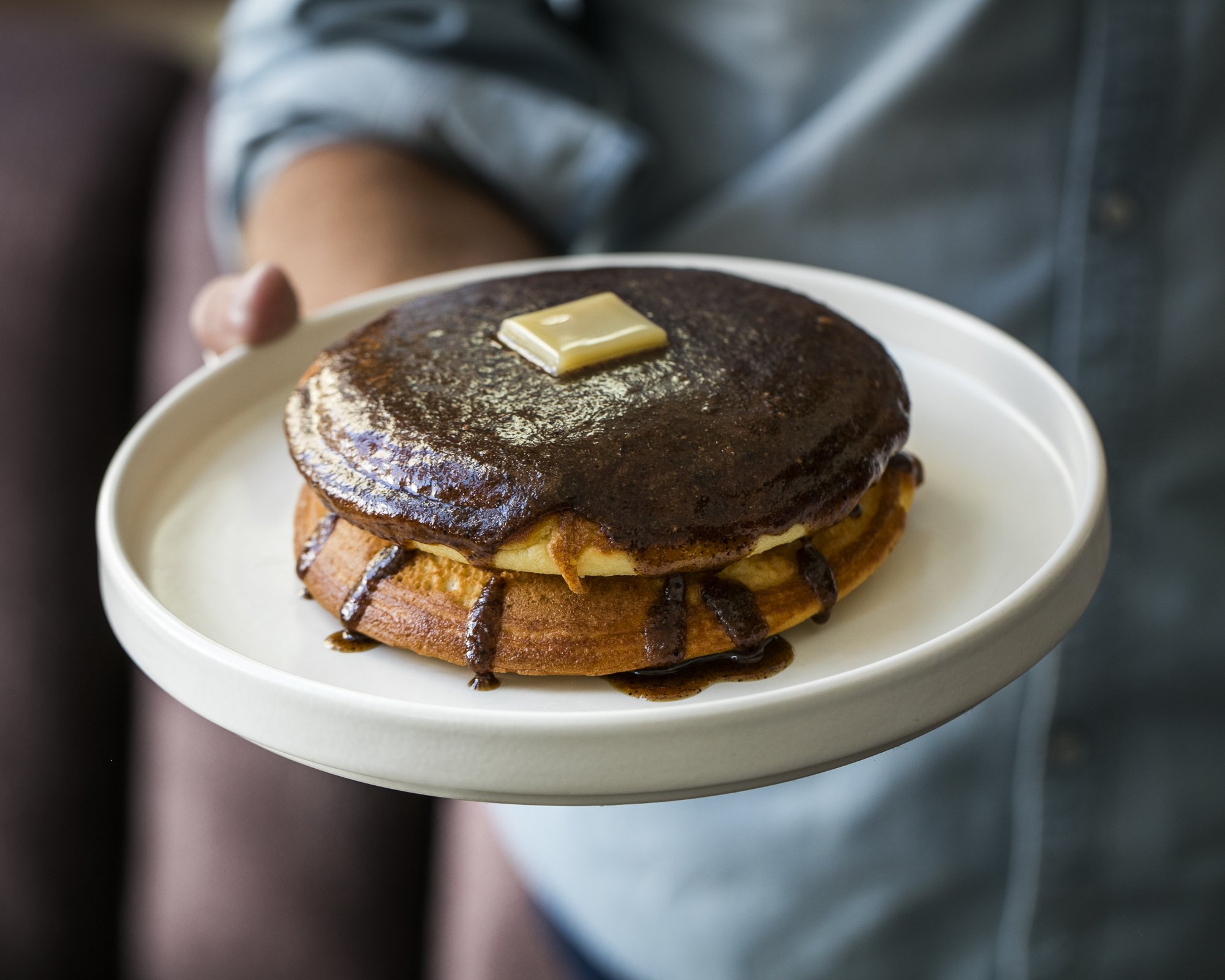 The transformation of downtown L.A. over the past few years has been nothing short of remarkable, with the arrival of the Broad Museum (celebrating its fifth anniversary this year; don’t miss the Shirin Neshat retrospective on until Feb. 16 at 221 South Grand Avenue, Los Angeles), the opening of Dover Street Market and Soho Warehouse, and the rise of award-winning restaurants Bavel, Majordomo and Nightshade.

Led by the Ace in 2014, there have been a slew of hotel openings, including The Nomad and, not far from the Fashion District’s California Market Center, The Hoxton (which is worth a stop alone for all-day restaurant Sibling Rival, 1060 South Broadway, Los Angeles), where the maple hazelnut pancakes live up to the hype.

L.A. designer Heidi Merrick likes to lunch at Freehand hotel’s The Exchange (416 West Eighth Street, Los Angeles) on Salmon Salad with tahini and turmeric oil, and the Cucumber & Parsley, which sounds healthy even if it is a tequila cocktail. “The hotels have really raised the bar,” she said of the now-buzzing neighborhood around 9th Street and Broadway, where her retail shop, open since 2016 at 115 West Ninth Street, is the only place aside from her online store to find her refined-resort-y cotton gauze poet blouses, iris-print silk robe coats, Hepburn trousers and “SRF LA” sweatshirts. 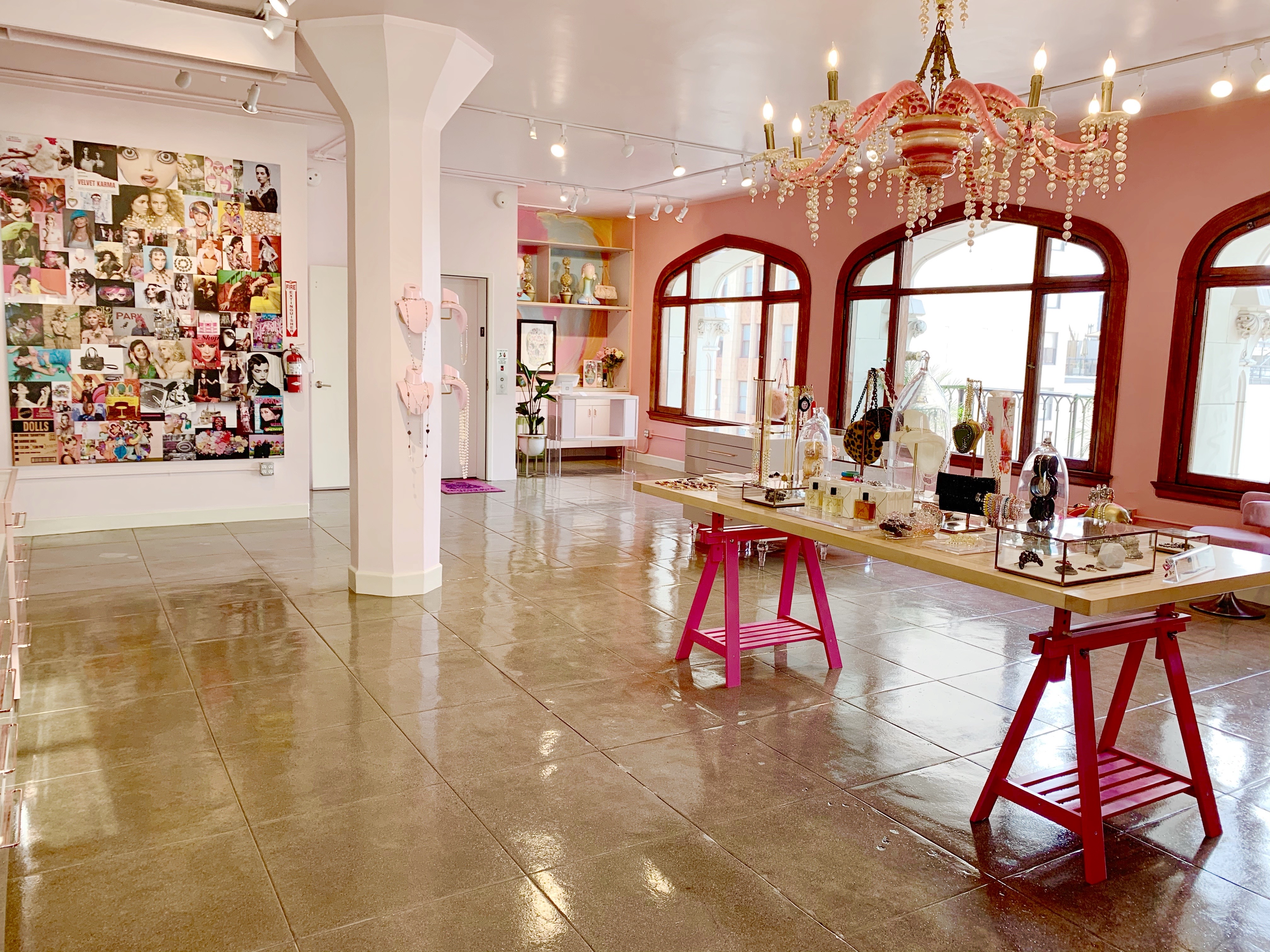 Nearby, Tarina Tarantino, the longtime L.A. designer known for her candy-colored resin, Lucite and rhinestone jewelry, hair accessories and granny chains, has opened her Sparkle Factory store/showroom on the seventh floor of the building she and her husband, Alfonso Campos, own at 910 Broadway. “Finally, I feel like we’re at a tipping point. We’ve been waiting for so long,” she said of the enhanced retail mix now open in the area, including Acne Studios, Mykita, Gentle Monster, A.P.C., Theory and Ganni, and soon-to-open Paul Smith. “It’s becoming a little SoHo,” said Campos.

While in the neighborhood, stop by the museum at the Fashion Institute of Design and Merchandising (919 South Grand Avenue, Los Angeles) to see the 28th annual “Art of Motion Picture Costume Design” exhibition, featuring the best of film costume design; this year’s highlights include Julian Day’s crystal-studded and feathered Elton John costumes for “Rocketman,” Arianne Phillips’ Sixties L.A. chic for “Once Upon a Time in Hollywood” and Michael Kaplan’s otherworldly looks for “Star Wars: The Rise of Skywalker.” 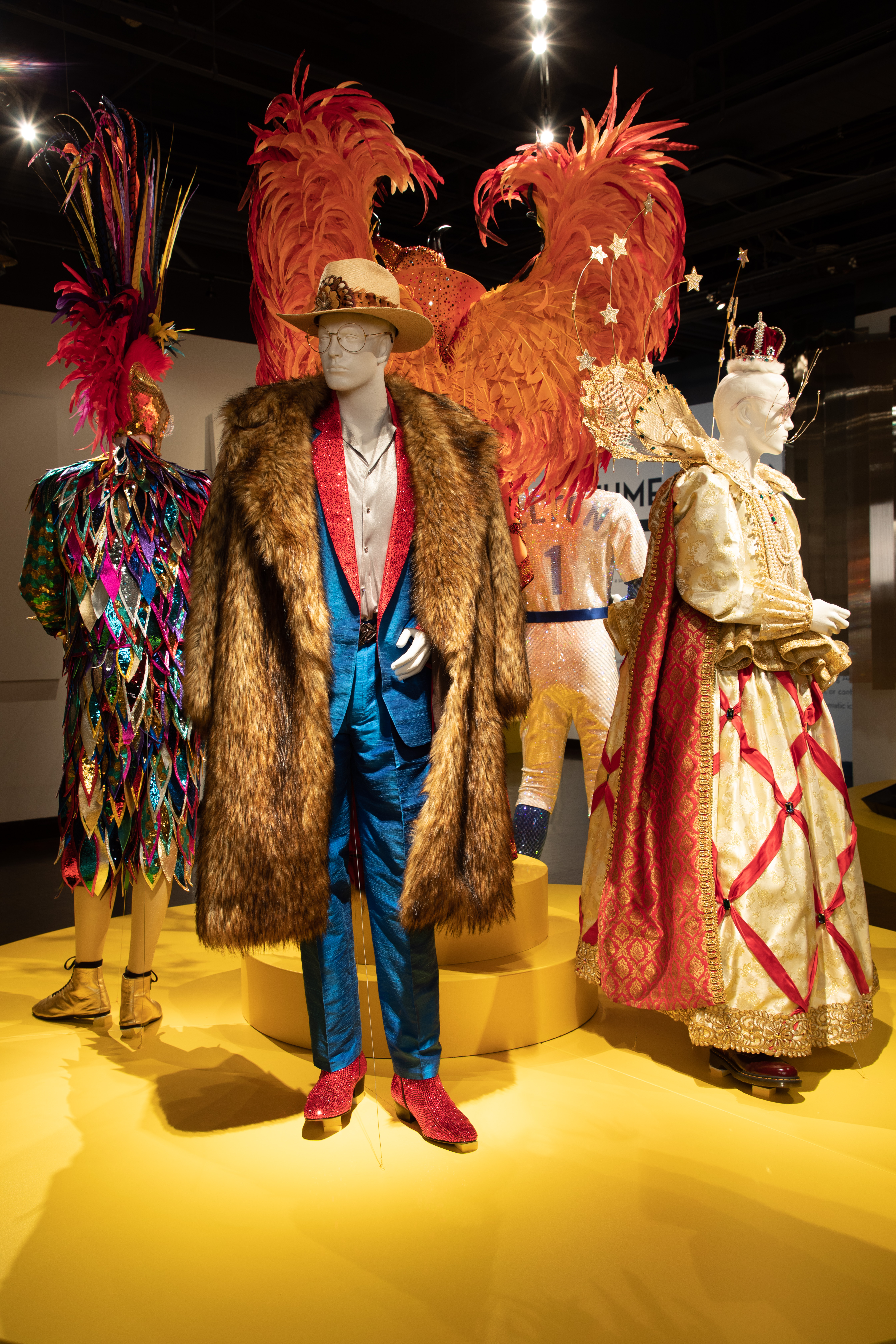 Across the river from the Arts District, in Boyle Heights, Bob Melet has moved his designer and stylist-loved vintage showroom Melet Mercantile (356 Mission Road, Los Angeles, by appointment). “My instinct was to leave Manhattan after 16 years,” said the former director of vintage buying at Ralph Lauren, who had been in SoHo since 2003. “When Ralph Lauren closed his Fifth Avenue store after just opening it.…I worked for Ralph for so many years, I felt the gods were speaking to me.…I feel 100 percent there is a renaissance for L.A., not just downtown L.A.…and I see this space resonating with entrepreneurs around the world,” he said of his immersive treasure trove of vintage clothing, textiles, accessories, objects, jewelry and printed matter, arranged into 16 thematic spaces and changed out every 12 weeks. The campus (formerly the Gavin Brown Enterprise) features indoor and outdoor spaces for rent (Cynthia Rowley held a fashion show here), and Melet will be building an in-house production space, catering area and home base for hairstylists and makeup artists: “I want to mix state-of-the-art with authenticity and be more efficient about doing it.” 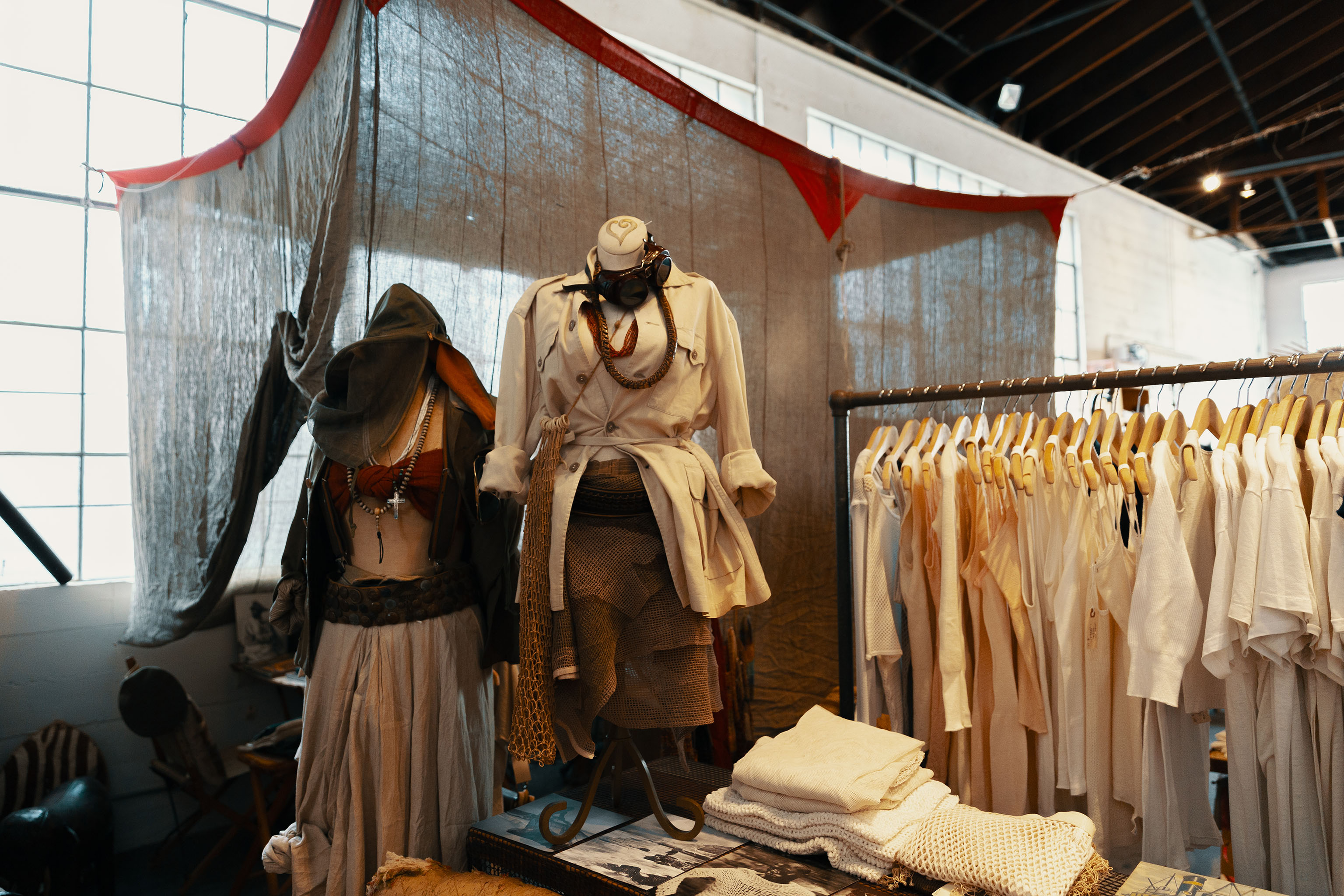